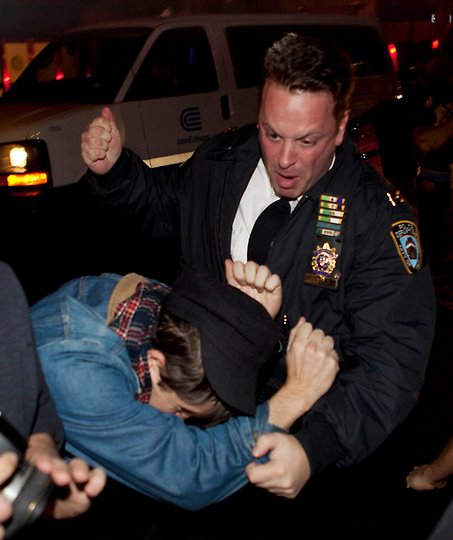 Mayor Bloomberg decided that a bit of dirt and grime was worth risking a riot. He arrested over 70 in Zuccotti Park, issuing a lengthy and unconvincing statement regarding the dangers of camping. So worried was the NYPD about what might happen they forced down a CBS helicopter filming from above, according to Gawker.

On Capitol Hill, a similar rout was taking place in the dead of night. In a fast move that deals a serious blow to a key regulator in charge of Wall Street derivatives trading, Obama's budget request for CFTC was cut by more than a third by GOP legislators eager to kill any oversight of Wall Street.

According to Politico, the administration had sought $308 million for the new fiscal year, but the amount is expected to come in closer to $205 million.

The derivatives market is $600 trillion big and much of that market is controlled by just 4 Wall Street megabanks: JP Morgan Chase, Citigroup, Bank of America and Goldman Sachs. Who is the watchdog for those derivatives? The CFTC has responsibility for most of them and it is getting a budget of only $205 million. They will not be able to hire the people or buy the technology that they need to keep up with Wall Street, never mind actually keep watch over them to try to prevent another financial catastrophe.

Crippling the CFTC is, of course, part of the GOP plan. As CFTC has moved this year to bring transparency to dark markets and crack down on commodities speculation, the tiny agency has been a lightning rod for right-wingers who opposed the 2010 Dodd-Frank reforms.

We Love Bailouts Bill: HR 1838 (Stivers) would repeal a section of the Dodd-Frank Act that prohibits the Federal Government from bailing out big Wall Street derivatives dealers. What are they thinking? With Merrill Lynch right now attempting to transfer a total of $75 trillion in derivatives bets from its investment arm into Bank of America, its FDIC-insured parent company, why is the GOP eager to facilitate the next giant taxpayer bailout?

Dark Markets are Good for You Bill: HR 2586 (Garrett) would allow big Wall Street derivatives dealers to continue opaque bilateral trading and allow them to avoid price transparency required by the Dodd-Frank bill. Off-book gambling in the derivatives market was a key cause of the 2008 financial crisis, and Dodd-Frank made huge steps forward, requiring the vast majority of derivatives to be traded in open forums where everyone could see what is going on in this $600 trillion dollar market. Similarly, HR 2779 (Stivers) would exempt all transactions between related affiliates from derivatives regulations, creating less, not more, transparency.

Swap Till You Drop Bill for Pension Funds: HR 3045 (Canseco) would permit swaps dealers to get a blanket exemption from any duty to respect the best interests of pension funds when giving any advice on a swaps deal. Just last week, we saw the largest municipal bankruptcy in United States history, in Jefferson County, Alabama, which was caused when JP Morgan Chase bribed local officials into entering a swaps deal to refinance a sewage district.

Go Back to Sleep SEC Bill: HR 2308 (Garrett) would create a series of new hurdles for the Securities Exchange Commission (SEC) to jump before the institution can pass a new rule or regulation. SEC is not my favorite regulator and their fines on the big Wall Street banks have not been commensurate with the crimes, but compared to the U.S. Justice Department, SEC regulators have been veritable energizer bunnies, extracting billions in concessions.

The House GOP has such a suicidal loyalty to their friends on Wall Street that they simply refuse to learn any lessons, even from very recent history. As they drink the Kool-Aid, Occupy Wall Street is winning its court fight this morning and regrouping.

The Occupy Movement cannot be stopped. The question today is, can Congress?

Learn more about these bills from Americans for Financial Reform (pdf).

wall street continues to waste money passing non-existant money from one awful issue to another & could be PROFITTING from sustainable yield business, local employment, environmental healing growing hemp & marijuana everywhere as substitute for current source of fossil fuel products, [gasoline, non-toxic plastic wrap & containers for food], [toilet] paper, NUCLEAR, hydro, coal energy, parents for baby trees, dirty air, food, water, unemployment, failing economy, environment, social security, health care. Just growing both in our water & land wasting wineries could STOP GLOBAL WARMING & THE NEED FOR WAR, go down in history as the wall street that saved Earth & Inhabitants rather than continuing destruction. Pamela Elizondo Frequent green candidate US congress CA. district 1, [now 2]please show e-mail address if possible
Be having an effect. I just got back from holding vigil at one event, and it is very powerful. One idea is for everyone in the USA who supports the movement to put a tent on their front lawn. We are indeed the change we have been waiting for. The Powers that Be can knock down tents, and brandish their bulky weapons against us, but it is not stopping us.
Well, I got the picture and corporate names, but are there any people and do they have names? Because with identities, we can address them, perhaps even occupy their front yards and possibly worse, disgrace them! Come on Mary give them up!