Consumers Could Save Billions on Health Insurance If This Dog Succeeds

If there is one organization that insurers despise and fear more than any other, it surely must be Consumer Watchdog.

Since its founding in 1985, Los Angeles-based Consumer Watchdog has dogged insurers relentlessly and played a key role numerous times in forcing them to change business practices and price their policies more fairly. I first heard of the organization in 1996, when I was still an insurance industry spokesman. Consumer Watchdog seemingly came out of nowhere to take the lead in trying to put a halt to a new practice in the insurance industry: requiring women to be discharged from the hospital within a day after delivering a baby or undergoing a mastectomy. Largely because of Consumer Watchdog's efforts, insurers had to rewrite their discharge policies.

The organization's first major attack on the insurance industry -- a ballot initiative in California (Proposition 103) require auto insurers to seek prior approval from regulators before increasing rates -- has saved drivers in the Golden State more than $62 billion over the past two decades, according to an analysis by the Consumer Federation of America.

The insurance industry spent nearly $63 million to defeat Proposition 103 back in 1988, but that was no match for the indefatigable founder of Consumer Watchdog, Harvey Rosenfield. Rosenfield, a lawyer who helped write the proposition, proved that a David can still bring down a Goliath, or at least reduce Goliath's power and profits, with the modern-day equivalent of a slingshot -- savvy media relations skills.

Rosenfield enlisted the support of consumer advocate Ralph Nader, and the two of them crisscrossed the state demanding that local TV and radio stations present their point of view on Proposition 103 to balance out the massive advertising campaign insurers were waging to kill it.

If Rosenfield could go back and do anything differently, he probably would have written the proposition to apply to health insurance as well as auto insurance. Because it didn't, health insurers are still able to get away with charging Californians pretty much whatever they want.

But Rosenfield and his colleagues at Consumer Watchdog have now taken the first steps to rectify that situation. Last week they filed a new ballot initiative with the state that will force health insurance companies to open their books and justify proposed rate hikes before they take effect. If the organization and its army of volunteers can collect half a million signatures over the coming months, California voters will be able to vote on the Insurance Rate Public Justification And Accountability Act a year from now.

Consumer Watchdog embarked on this new effort because Californians will soon be facing the same predicament with health insurance they experienced with auto insurance prior to 1988.

Two years before that ballot initiative was adopted, California lawmakers passed a law mandating that all drivers be insured, which meant that insurance firms would get billions of dollars in new revenue. Lawmakers did not see fit, however, to make insurers submit their rate requests to regulators for review and approval. Because there were virtually no restrictions on what the insurers could charge drivers, California soon had some of the priciest and fastest increasing auto insurance rates in the country. 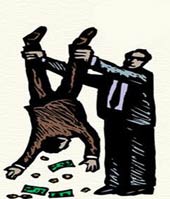 Now back to health care. As a result of the Affordable Care Act ("ObamaCare") passed by Congress last year, all Americans will soon be required to have health insurance. The "individual mandate" provision of that law will become effective on January 1, 2014, meaning those of us who are not eligible for a government-run program like Medicare or Medicaid will have to buy coverage from a private insurer or pay a penalty to the IRS.

Reform advocates have reason to be worried that health insurers will gouge consumers once the federal mandate kicks in, just as auto insurers did after California lawmakers passed the auto insurance mandate.

"Getting control of health insurance premium increases in California is like trying to slow down a runaway train," said Consumer Watchdog's current president, Jamie Court, in announcing the proposed ballot initiative. "That's because health insurers are accountable to no one."

California lawmakers failed earlier this year to enact legislation that would do the same thing as the new ballot initiative because the insurance industry and its allies were able to keep the issue from coming to a vote in the Senate. The bill's sponsors say they will try again next year, and Court and other consumer advocates are hopeful it will pass. But they're not counting on it. That army of volunteers is ready to begin fanning out across the state to collect the signatures required to make sure Californians can vote on the ballot initiative next November.

You can be certain the insurers will spend millions of premium dollars they collect from Californians trying to defeat it, just as they tried to defeat Proposition 103. But if I were a betting man, I'd put my money on Consumer Watchdog.