Kill The Messenger? Pro-War Advocates Should Blame Themselves for the Mess in Iraq | PR Watch

Kill The Messenger? Pro-War Advocates Should Blame Themselves for the Mess in Iraq 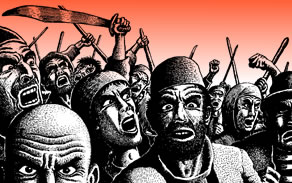 As conditions in Iraq continue to deteriorate, supporters of the war are casting around for someone to blame, and journalists are becoming an increasingly popular scapegoat — an ironic turn of events, since the mainstream media's uncritical support for the war helped get us into this mess in the first place.

In our 2003 book, Weapons of Mass Deception, Sheldon Rampton and I described how newspapers and television networks behaved like a propaganda arm of the Bush Administration, cheerleading for the attack on Iraq. These days, however, journalists are coming under attack from pro-war forces, which have gone so far as to accuse individual reporters, editors and even the entire mainstream media of outright treason.

A chorus of right-wing media figures recently accused the New York Times of treason in response to its publication of a story describing efforts by the Bush administration to monitor terrorist money laundering using SWIFT, an international banking correspondence system — even though, as the Boston Globe and others have pointed out, "American intelligence and law enforcement access to SWIFT's database was not secret in any meaningful sense, having been disclosed more than three years ago" by U.S. government officials and on the SWIFT website. The Weekly Standard called the Times a "national security threat," and Melanie Morgan, a right-wing radio talk personality affiliated with the Republican activist group, Move America Forward, said that Times editor Bill Keller should be tried for treason and that she "would have no problem with him being sent to the gas chamber."

The charge of media treason has also followed news reports on human rights abuses by U.S. forces at Abu Ghraib, Haditha and elsewhere. Following reports on Haditha, for example, commentators on the conservative FreeRepublic.com website expressed the hope that "all reporters that had ANYTHING to do with this report are brought up on treason charges, and hung."

Pin the Blame on Cronkite

These cries of "hang 'em high" reflect the stage that we have entered in the Iraq fiasco. We have reached a point at which everyone — supporters and opponents of the war alike — can see that things are going badly. The battle now, therefore, is over who gets the blame. Opponents of the war like myself have an easy case to make: the war was a bad idea from the outset, and the blame should go to the politicians who started it. Supporters of the war, however, are trying to make the case that the U.S. has actually been succeeding in Iraq, and that all of the evidence to the contrary is merely the work of internal enemies who are deliberately distorting reality in order to sap America's resolve. This argument repeats the "lesson" that the right wing drew from the war in Vietnam. To this day, conservatives argue that the U.S. was winning in Vietnam until "the battlefield victory of the 1968 Tet Offensive was turned into a defeat with a few words from Walter Cronkite."

I am old enough to remember watching U.S. news coverage during the war in Vietnam, and the media's role back then was quite different from the historical fantasy that conservatives have invented. In reality, the U.S. media mostly stood by the Johnson and Nixon administrations. Cronkite and other journalists did not begin to question the war until tens of thousands of Americans and hundreds of thousands of Asians were already dead, and until after public opinion had turned against that war. I remember how the media was blamed after the fact for losing Vietnam, and I can see the pattern repeating itself now. The Bush Administration and its supporters want to blame everyone but themselves for the mess that they have created.

Recently our volunteer contributors to SourceWatch exposed some of the links between the Republican Party and a pro-war lobby group called Vets for Freedom. This in turn helped the Buffalo News to ask some questions, and their investigation discovered that in fact Vets for Freedom was a project of Taylor Gross, who was until 2005 a top operative in the White House PR team, working directly under presidential spokesman Scott McClellan. In addition to writing op-ed pieces for newspapers including the New York Times, Vets for Freedom tried to pass themselves off as "non-partisan" journalists so they could con newspapers into publishing their pro-war reports from Iraq as though they were actual news dispatches. The Buffalo News story also noted the links between Vets for Freedom and the Donatelli Group (the same PR firm that helped concoct Swift Boat Veterans for Truth) and reported on the inability of Vets for Freedom to explain just who is paying for all their travel and PR and their fancy website.

Immediately upon reporting these facts, the Buffalo News became the target of attack from Mackubin Thomas Owens in the conservative National Review. Owens wrote that exposing the ties between Vets for Freedom and Republican political operatives reflected the "moral smugness of the American press" that "has become unsufferable." Owens went on to suggest that the Buffalo News report was "a harbinger of a return to the bad old days of the post-Vietnam mutual mistrust between the press and the military."

Forgive me for pointing this out, but why on earth should journalists trust the military — particularly when we are living through a political moment in which the war-mongers in America routinely excoriate journalists as traitors and call openly for them to be jailed or killed?

The tragedy here is that, even as the right wing turns to ever shriller hostility against the media, with worrisome implications for anyone who values the First Amendment and the ideals of civil, democratic discourse, most of the media continues to ignore this threat and even to echo the charges of people who seem bent on attacking the principles of journalistic freedom. The Buffalo News (circulation 200,000) is not a very large newspaper. It is absurd, therefore, for Owens to suggest that a single story published there somehow demonstrates the bias or smugness of the entire news media — especially since the Buffalo News story on Vets for Freedom has not been picked up by a single other mainstream news organization. It hasn't been syndicated by the Associated Press or UPI. It hasn't appeared in the New York Times, Los Angeles Times, Washington Post, Wall Street Journal, CNN, Fox News, PBS, ABC, NBC or NPR.

In fact, the mainstream media has done more to circulate Owens' attack on the Buffalo News than it has done to circulate the original story which Owens is attacking. The website of CBS News has republished Owens' media-bashing column, thus undercutting the one small voice in the mainstream news media that actually exposed Vets for Freedom and their attempts to manipulate the media.

Why the silence, and even complicity in spreading these smears? It seems that journalists have somehow not yet realized that their very profession is under attack. Until they recognize this reality and begin to defend themselves, we can expect more bad news for the integrity of journalism and the state of the nation.

Joe Conason has a [http://www.salon.com/opinion/conason/2006/07/14/melanie_morgan/index.html column in Salon.com] that gives further details about Melanie Morgan, who has now apparently revised her opinion on killing Bill Keller. Instead of the gas chamber, she is now recommending electrocution: <blockquote>At that point one of her co-hosts cheerfully interjects, "You originally called for the gas chamber ... but we kind of like Ole Sparky," meaning the electric chair. To shrieks of laughter from Morgan, he launched into a gruesome description of execution by electrocution: "Their hair would go up and everything, smoke, electrical jets shooting out of their eyeballs ... We'd take Bill Keller, put him in the electric chair -- after a trial -- and then fire it up." He then launched into a series of oral sound effects -- buzzing, screeching, hissing and blubbering sounds meant to simulate the high-voltage end of the Times editor.</blockquote>
Glenn Greenwald has an excellent post that summarizes the state of affairs, with links to lots of examples. "[http://glenngreenwald.blogspot.com/2006/07/journalists-its-time-for-some-articles.html This goes on every day with the right's largest blogs]," he writes. "Every day, a new traitor, more treason, more journalists and Democrats who deserve to be hanged."