"'Conservative commentator' is not an appropriate label, by itself, for someone in her position, even if she is not speaking on government time or is speaking for herself and not the department," PBS ombudsman Michael Getler wrote of Deputy Assistant Secretary of Labor Karen Czarnecki.

The New York Times, Washington Post and other "major U.S. newspapers often quote Jeff Kagan -- regarded as one of the most influential telecommunications analysts -- but invariably leave out the fact that he is paid by many companies in the industry to offer his comments to the media," reports Tim Arango. 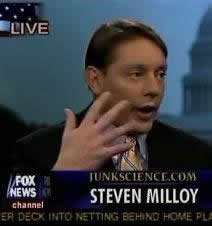 "Scripps Howard News Service announced Jan. 13 that it's severing its business relationship with columnist Michael Fumento, who's also a senior fellow at the conservative Hudson Institute.

Two opinion columnists and fellows at conservative think tanks have admitted to taking money from indicted lobbyist Jack Abramoff to write favorable columns about his clients.

The media watchdog group Fairness and Accuracy in Reporting (FAIR) looked at on-air sources for four National Public Radio news shows in June 2003, and think tanks and regular commentators on NPR from May to August 2003.

University of Texas professor Sheldon Landsberger has admitted that a pro-nuclear column he submitted under his own name to the Austin American-Statesman was actually written by the Potomac Communications Group, a Washington PR firm that works for the nuclear power industry. "For at least 25 years," reports William Adler, an employee of Oak Ridge National Laboratory in Tennessee named Theodore M. Besmann (who moonlights for Potomac Communications) "has had published nuclear love songs in newspapers across the country, under his own or others' names."

Conservative columnist George Will doesn't think it's anybody's business that he's been paid $25,000 a year by scandal-plagued media magnate Conrad Black. Will is one of several mostly conservative pundits and politicians who got paid to sit on the advisory board of Black's company, Hollinger International.

"The right wing talk media empire is taking some hits," observes Anthony Violanti. Rush Limbaugh got the boot from ESPN last week after making racially charged comments about "black quarterbacks." Michael Savage was fired by MSNBC after saying he wished a gay caller would "get AIDS and die." Bill O'Reilly at Fox News has made himself a laughingstock with his temper tantrums and attempt to sue satirist Al Franken. Columnist Robert Novak is in the center of a controversy about his role in publishing a White House leak that outed an undercover CIA officer.

As we detail in our book Trust Us, We're Experts , 'junk science' is a PR pejorative used by corporations to smear environmentalists and public interest scientists.