According to trade magazine RiskNet, credit specialists at Citigroup are considering launching the first derivatives intended to pay out in the event of a financial crisis. These types of derivatives function like an insurance policy, allowing parties to hedge against risk.

Citibank is dodging newly-enacted federal laws aimed at protecting consumers from unfair credit card company practices. The new law prohibits credit card companies from raising interest rates whenever they like, on short notice or no notice, and for no particular reason.

It's really unbelievable. The way that Goldman Sachs keeps sticking its foot in it is simply unbelievable. Let's not review their gross profits and bonuses, or their many failed public relations schemes to gloss over unseemly profits, a practice we have dubbed "greedwashing". Let's simply recap this week's news.

On Sunday, the New York Times detailed in a front-page expose' how Goldman may have hastened the demise of AIG, and perhaps the global economy, by betting that the housing market would collapse and jacking up its insurance for mortgage securities with AIG to extract more and more money from the firm as the housing market went south.

Last September, when President Barack Obama gave a major speech on Wall Street urging bankers to support financial reform, the CEOs of the nation's megabanks didn't bother to show up -- a move widely interpreted as a sign of disrespect.

On the day that Punxsutawney Phil emerged to predict a long hard winter, Americans picked up the newspaper to read that AIG, the bankrupt insurance giant, was going to pay out $100 million in bonuses to its failed financial products division. Kenneth Feinberg, President Obama’s pay czar, announced that these were “grandfathered” retention payments and that the unit had taken a $20 million dollar reduction in bonuses.

Like Bill Murray in the classic film Groundhog Day, we are being forced to live this day over again. 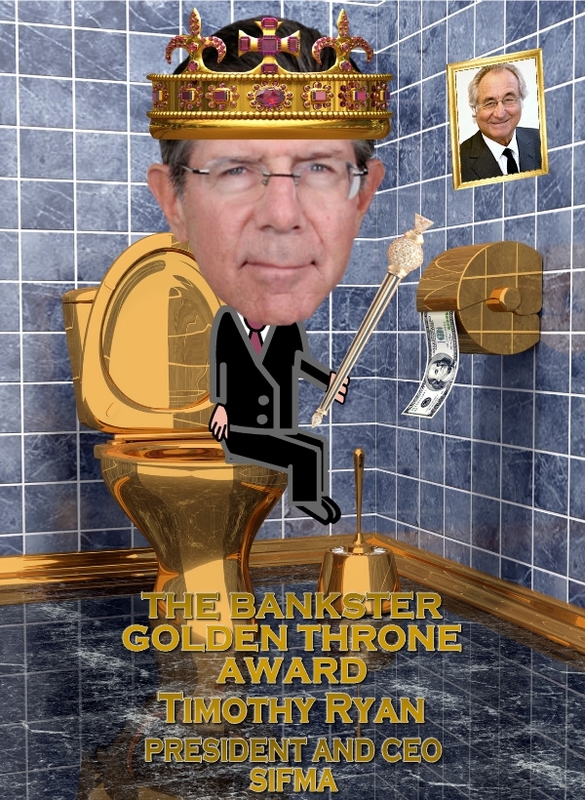 The Center for Media and Democracy and BanksterUSA are pleased to present our Golden Throne Award to T. Timothy Ryan Jr., President and Chief Executive Officer of the Securities Industries and Financial Markets Association (SIFMA). SIFMA is the leading behind-the-scenes lobby group representing big banks and investment firms, as well as broker-dealers and other peddlers of financial instruments, which Warren Buffett labeled "weapons of mass destruction." SIFMA lobbies Congress and financial regulators, and handles securities-related press for some of the biggest players in the financial crisis--Goldman Sachs, Bank of America, AIG, Merrill Lynch, Citigroup, and Fidelity Investments.

A group of pinstriped traders, upset with the bank-bashing rhetoric emanating from Washington, launched a Wall Street defense campaign the same morning that Treasury Secretary Tim Geithner was being grilled by Congress.

The debate over banks and banking came front and center this week. In his toughest language yet, President Barack Obama vowed to veto financial reform legislation that is not tough enough on Wall Street. "The lobbyists are already trying to kill it," Obama told Congress in his State of the Union address. "Well, we cannot let them win this fight.

While President Obama is in Washington talking about putting a freeze on government spending, soon millions of American families will be out in the cold. In one month, one million Americans are slated to lose their unemployment insurance. Millions more will follow.