With President Obama fielding cynical cuts to Social Security to appease the Fix the Debt crowd and reach a budget deal, groups are teaming up to point out that there would be a lot less concern about the budget deficit if corporate America did what average Americans have to do and actually pay taxes. Taking advantage of loopholes, tricks and deductions, many U.S. companies pay far below the required 35% tax rate, and some, like General Electric have a negative tax rate. New web resources are shining a light on the firms and individuals that manipulate the U.S. tax system to their benefit, putting more of the burden on America's middle class.

A JPMorgan Chase employee stepped onstage at a black-tie gala on Wall Street last week to accept a "best crisis management" award given by an investor relations magazine. The bank, which was recently the subject of a U.S. Senate investigative hearing and an ongoing FBI probe into $6.2 billion in trading losses known as the "London Whale" fiasco, is not the subject of ridicule -- but praise -- from its cronies on Wall Street.

Campaign for America's Future writer Richard Eskow puts two important headlines together from this week, about the budget cuts which will go into effect on Friday harming average Americans and the poor and the ongoing corporate welfare the U.S. government is handing out to the "too big to fail" banks on a daily basis.

Americans always feel charitable around the holiday season, giving some $300 billion to a diverse array of charities in 2011 alone. Now there is new way Americans can help their neighbors in need, by purchasing and forgiving their debt.

At a time when the gap between the ultra-rich and the rest of us is reaching historic heights across the globe, at least $21 trillion (with a "t") in unreported private financial wealth was recently discovered sitting in secret tax havens. 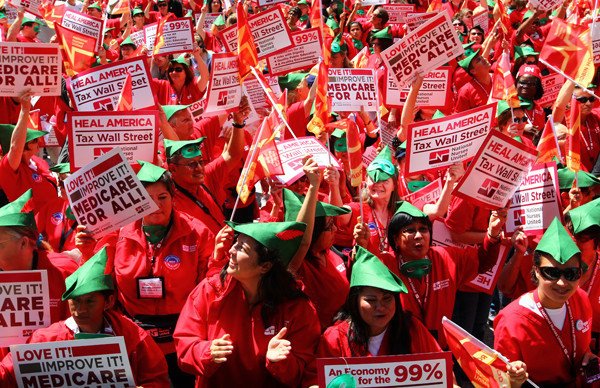 Thanks to Occupy Wall Street, in the State of the Union this week President Obama struck some of his most populist themes yet. He wants to tax millionaires, bring back manufacturing and prosecute the big banks. He touted his Wall Street reforms saying the big banks are "no longer allowed to make risky bets with customers deposits" and "the rest of us aren't bailing you out ever again."

But are we safe from the next big bank bailout? Many experts are dubious and Wednesday the consumer advocacy group Public Citizen decided to test the theory in the most direct way possible. They used the administrative law process to formally petition the nation's top bank regulators to move swiftly to break up Bank of America (BofA) asserting in their petition: "The bank poses a grave threat to U.S. financial stability by any reasonable definition of that phrase."