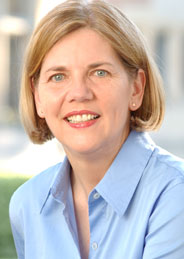 In a savvy move, the new Consumer Financial Protection Bureau launched its first website today. The CFPB was created by the passage of the Dodd-Frank Wall Street reform bill in July 2010 and is headed on an interim basis by well-known consumer advocate, Elizabeth Warren. While the agency will not officially open its doors for formal consumer complaints until July 2011, the new website offers the agency an opportunity to start reaching out to consumers to hear their ideas on how the institution can best serve the public.

"We're excited to announce the launch of our website, ConsumerFinance.gov, for one very important reason –- to start a conversation with you. With the launch of our site, we will be open for suggestions," Elizabeth Warren explained in a statement.

While the agency will have a hard time dealing with actual consumer complaints until it hires more staff and formally opens its doors, the website offers staff a mechanism for communicating with an anxious public -- who, in my experience, has been clamoring for Elizabeth Warren's contact information ever since the passage of the Wall Street reform bill.

It is a clever idea and good customer relations.

Get Involved in the Conversation!

To: The great, Elizabeth Warren I will campaign for you and all of my money is yours and yours alone. I refuse to give a dime to any other Dem. or the pres. The people here in MA will flock to your side and soon Mr. Brown will be just a memory. Thanks for your advocacy and I was outraged when you were passed over for the job in the agency to protect the average citizen from the thievery that has been taking place for years. Now, I have a second chance to support you and support you I will. Thanks, Nancy Walton
You are a complete idiot to think ELIZABETH WARREN is going to win over Scott Brown... All your begging isn't going to work!!! He is the better person and he is better looking too with or without his clothes.... SORRY -
I have to say I'm a concerned citizen who is SICK & TIRED of you and your communist ilk. The redistributive policies you and your cronies believe in are ruining this country! It's time to expose you for who you are. You're a marxist who wants nothing more than to take, Take, TAKE from those of us who produce and create. Freedom and free market principles are what made this country great. And in order to continue that amazing tradition of freedom, I and many in my group will do everything we can to make sure you and your commie principles are exposed and defeated in Massachusetts!
As passionate as I am about my politics, both on the conservative side and the liberal side of various issues, I have never, ever donated so much as $1 to any political campain or party in my 30 years of voting. Elizabeth Warren will have the distinction of being the first candidate for office to whom I will donate money, support in any way, and encourage in every respect. She represents the key (and life saving)counterbalance to an incredibly skewed, manipulated, and dangerous monetary policy and financial institutional behavior. This isnt about the end of capitalism in America. Healthy Capitalism will always be alive and well in America, even if regulations are enacted to prevent detrimental behavior. This is about dangerous GREED hiding behind the untrue accusation of communism, an emotional response that lacks intelligent forethought or empirical data in support. The legislative branch of the federal governement has abrogated our consistution and replaced our Democracy with a Plutocracy. They have done so without the consent or will of the people. Calling any effort at countermeasures "Communisim" is getting old. The time is now for the likes of Elizabeth Warrren.