On October 3, 2010 the U.S. Treasury's Troubled Asset Relief Program (TARP) will end. The expiry is likely to generate many celebratory claims from federal government officials that the bailout is over, and that taxpayers have been made whole or will be made whole in short order.

While it is true that many TARP bailout programs have ended, Center for Media and Democracy research shows that money is still due to taxpayers under the TARP. More importantly, the research shows that the U.S. Treasury Department's ten TARP programs represent less than seven percent of the $4.7 trillion disbursed by the U.S. government in an effort to aid the financial services industry. Far more money has been disbursed by the Federal Reserve to prop up the financial system than by the U.S. Treasury, and those loans are still outstanding.

GRAPH ONE: TARP Bailout vs. the Federal Reserve Bailout 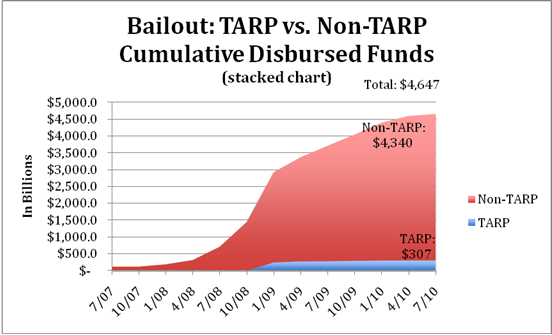 The first graph shows that non-TARP expenditures, largely by the Federal Reserve, dwarf those of the TARP. It is absurd to declare "mission accomplished" while counting only one small portion of the bailout. While the Federal Reserve aid was disbursed mostly in the form of loans, that money has not been paid back yet, and in the housing sector this disbursal of funds continues in what we like to call a "stealth bailout."

GRAPH TWO: The Double Bailout of the Financial Sector and the Housing Sector 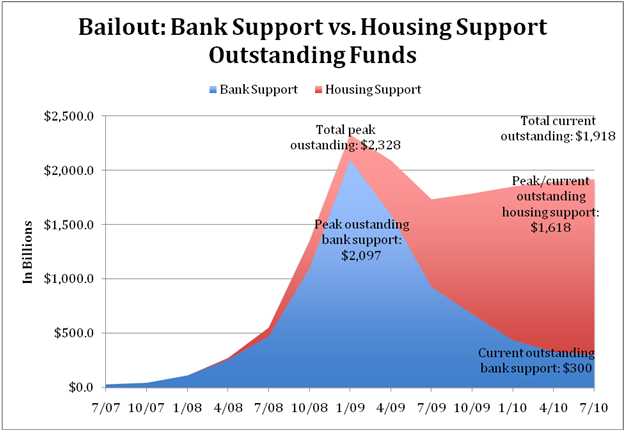 Our unique timeline of the bailout derived from government data pulled on a quarterly basis, clearly shows the initial infusion of some $2.7 trillion in emergency funds into the financial system, followed by a second infusion of funds into the mortgage and housing markets, largely through Fannie Mae and Freddie Mac and without a vote, or any Congressional oversight. It represents the largest intervention in the housing market in history, yet it is not getting any of the scrutiny that has been applied to the TARP from policy experts, policymakers or the press.

The Center for Media and Democracy has undertaken a number of bailout transparency projects including our Wall Street Bailout Cost Table which lists the 35 government bailout programs and shows outstanding balance sheets for each one. The chart links to the underlying government source material and a spreadsheet is available to reporters upon request. The chart is updated monthly and the section of programs was peer-reviewed by the economists at the Center for Economic and Policy Research.

While every TARP dollar has been scrutinized by the Special Inspector General for the TARP and the Congressional Oversight Panel headed by Elizabeth Warren, the same cannot be said for the Federal Reserve programs. While the Fed's emergency bailout programs from the early days of the financial crisis will be subject to an audit per the requirements of the 2010 Dodd-Frank Wall Street reform bill, we believe the continued interventions of the Fed in the housing market is deserving of the similar level of oversight and transparency.

The Center for Media and Democracy is an independent, non-profit, non-partisan media and consumer watchdog group that focuses on investigating and countering public relations campaigns and spin by corporations, industries, and government agencies.

Imagine that graph if you could include the value of the commerical paper & money market guarantees, along with the increase in the FDIC limit.