Declare a Jobs Emergency on September 15! 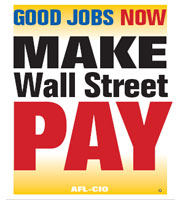 One group is pushing back against the drip, drip, drip of disappearing jobs and relentless cutbacks in public services. Jobs with Justice (JwJ), the broad-based coalition of faith groups, labor unions, students and grassroots organizations located in 47 communities across the nation, says it simply will not accept a jobless recovery.

Say "No" to the New Normal:

While some pundits are labeling the 10% unemployment rate "the new normal," JwJ is calling it what it is A National Jobs Emergency. "When Wall Street was in crisis, Congress found hundreds of billions of dollars to bail them out. We need to respond to the jobs crisis with the same urgency," says JwJ Director Sarita Gupta. Their slogan is simple: Good Jobs Now, Make Wall Street Pay.

The folks at JwJ know that that without major federal investment in job creation, the unemployment rate could hover between 8-13% for the next decade. Because so many people are out of work and tax revenue is down, city and state budgets have been hit hard too, generating increasingly harsh cuts in essential services, such as education, transport, police and fire. But how does one pay for the necessary investment in the workforce when 41 states are operating in the red and obstructionists in Congress are prioritizing deficit reduction over job creation?

JwJ material states that it is time to make Wall Street pay for the mess it made, literally. Specifically, the organization is promoting a financial speculation tax, a tiny tax on high-volume, high-speed speculative trading that some experts say would tamp down reckless Wall Street gambling and at the same time bring in a large steady stream of revenue, $100 billion a year or more, to put America back to work. JwJ points to a bill authored by Oregon Congressman Peter DeFazio and Iowa Senator Tom Harkin, which applies a small transaction tax of .25% to sales of stocks, options and futures, after exempting middle class investment vehicles like 401k's.

The organization is planning 120 actions across the country on September 15th featuring a diversity of targets and tactics. In Orlando, activists will mourn the Death of the Middle Class while targeting incumbent Republican Senator George LeMeiux, who has done little to advance the issue of job security or stop the skyrocketing rate of foreclosures. In Chicago, activists will be visiting GOP headquarters to demand the end to obstructionism. In Dallas, they will pack a city council meeting protesting proposed budget cuts. In San Francisco, residents will urge incumbent Democratic Senator Dianne Feinstein to help the state put out the fire caused by its ravaged budget.

The goal is to target obstructionists as well as light a fire under complacent democrats. To that end, JwJ is targeting Democrats as well as Republicans. "Democrats are being too cautious and are playing it safe talking about the need for deficit reduction. Well the emergency is the jobs deficit not the fiscal deficit," says Erica Smiley, JwJ's Southern Regional Organizer. "This is a litmus test issue. If Democrats come out strongly on jobs before the election, we will have their back." Left unsaid is that the reverse will also be true. This is a very real concern as poll after poll shows a clear lack of enthusiasm on the part of democratic voters who feel that the red carpet was put out for Wall Street (now bouncing back with record profits and bonuses) while Main Street residents were kicked to the curb.

Join in the Fun

So if you are feeling fired up on Wednesday, September 15th, hook up with your local JwJ or cook up your own creative action. You can see a complete list of actions and contacts by clicking here. Linking the jobs and revenue crisis to Wall Street is a no-brainer says Smiley: "We bailed out Wall Street and Wall Street is making record profits. Now it's time for them to bail us out." It has the ring of simple justice.

Articles like these are very helpful for depicting the macro view of the economy today, as the health of our markets are directly dependent on our employment rates. But if we look at the tiny, minute, micro view of things, I begin to wonder... If you are a person who has been laid off and still have to find a source of income somehow, you could easily find income via other means. For example, an average English speaker could get a freelance writing job that pays a decent sum of money easily enough online. Is unemployment really a Government problem or an Individual one?
I hope I won't offend anyone with my statement here, but I feel that it's just becoming a mindset about unemployment whereby people are feeling it's a 'norm' to be out of job.. and thereby 'blaming' the economy for their unemployment. Where there's a will, there's always a way. For instance, the internet now a fast and growing platform to make money online. We can't always sit around to wait for something to happen. taking action is simply a must
Awesome post on the manner. way to go my friend.