Viral emails have emerged as a form of stealth propaganda recently, most noticeably in the recent U.S. presidential campaign, when Barack Obama was dogged with false claims that he was a Muslim, that he was refused to salute the American flag, that he was not a U.S. citizen and so forth. The Washington Post reported earlier this year that Danielle Allen, a professor at the Institute for Advanced Study in Princeton, New Jersey, attempted to trace the chain of one of those emails and found what the Washington Post called "valuable insight into the way political information circulates, mutates and sometimes devastates in the digital age." She noted that the anonymous nature of viral emails, combined with the word-of-mouth way that they spread, makes them hard to counter. "This kind of misinformation campaign short-circuits judgment," she said. "It also aggressively disregards the fundamental principle of free societies that one be able to debate one's accusers."

Recently a friend forwarded me a viral email that has apparently been circulating since at least June of this year. I haven't seen it previously, but a Google search turned up several copies on various websites. This particular viral message was unrelated to Obama or the presidential campaign but carries its own load of rhetoric aimed at shaping public opinion. On the principle that these subterranean propaganda campaigns ought to be openly discussed and exposed, I thought I'd respond to this one publicly.

The email that I received began innocuously enough, listing a number of famous Hollywood actors who served in World War II and praising their service. As far as I could tell, this part of the message was accurate. It mentions Alec Guinness, James Doohan ("Scotty" on Star Trek), Donald Pleasence, David Niven, Jimmy Stewart, Clark Gable, Ernest Borgnine, Charles Bronson, Audie Murphy and others -- all of whom did indeed serve during the war, many in combat, and some suffering significant injuries. But then there's the kicker. The email concludes with a nasty swipe at today's Hollywood celebrities, accusing them of anti-Americanism for criticizing President Bush and opposing the war in Iraq:

So how do you feel the real heroes of the silver screen acted when compared to the hollywonks today who spew out anti-American drivel as they bite the hand that feeds them?

I did some checking, and it appears that this message has been circulating since at least June of this year. It clearly attempts to create a false contrast between the "real, manly, patriotic" stars of yesterday and today's Hollywood, where actors are presumed to be effete, liberal, traitorous, and certainly too cowardly to ever go to war themselves. But its closing commentary is not only insulting but untrue. Certainly some Hollywood celebrities disapprove of the Bush administration and the war in Iraq, as do most Americans these days. Bush in particular is on track to leave office as the most unpopular president in history. Perhaps the author of the viral email I received would like to imagine that this means an overwhelming majority of Americans is unpatriotic.

In reality, however, opposing the war or President Bush is not the same thing as "spewing out anti-American drivel." And I have yet to hear an actual story of a single Hollywood celebrity who has actually said that he or she "hates our flag" or wants to "march in anti-American parades." 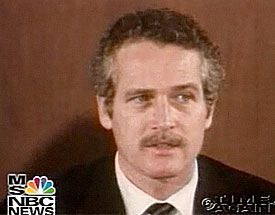 Out of curiosity, therefore, I decided to compile my own list of Hollywood celebrities who have seen actual combat in U.S. wars. The names that were not included in the email I received tell an interesting story. Contrary to what our viral propagandist would have people believe, the experience of war persuaded many soldiers, including Hollywood celebrities, to oppose subsequent military adventures.

Of course no one should rely on celebrities as their primary source of wisdom about matters as important as war and peace. However, these examples should suffice to answer anyone who still attempts to draw a pro-war message from the tragedies and suffering of the past.

If you enjoyed this bit of history, please pass it on.

CORRECTION: When originally posted, the second sentence of this article began as follows: "The Washington Post's Danielle Allen, a professor at Princeton University's Institute for Advanced Studies, attempted to trace the chain of one of those emails..." This contained two errors. First, Danielle Allen was quoted in the Washington Post but is not affiliated with the newspaper in any way. Secondly, the Institute for Advanced Study (not Studies) is not formally affiliated with Princeton University, although it is located in Princeton, New Jersey. I regret the errors. -- Sheldon Rampton

FWIW, I received a copy of that e-mail in 2004.
I know its "preaching to the converted" but there were probably 100's of liberals who saw action between WWII and now. One that comes to mind is Eddie Albert, who fought in the Pacific. Among the Hollywood conservatives who did not go to war, John Wayne was the most prominent.
There's a long history for this sort of thing, and it shows up in and out of both major political parties. During this past election, the word "populism" popped up again as a PC synonym for "red-necked racism." I miss Molly Ivins, for she wouldn't stood for it. This labeling of the opponent, this casual demonization, has been in the American psyche since the literal witch hunts. In the 1930's Father Conklin, among others, was known for it. Most pastors have at least one "joke" (teaching story/parable) about St. Peter conducting a tour of heaven, where each church believes they are the only one there. We can no longer afford to "shoot ourselves in the foot" (or our friends in the head or trunk, if we are Cheney). Viral email is just the modern version of gossip: it actually isn't all that much faster, it just increases in level and period of repetition. What is needed is to resume teaching critical thinking instead of passive consumption in school. That is, if we want to have an educated populace and a democracy, TRUE populism. We don't have to like everybody, but if we can't play well with others, we really are not going to get very far. Nor as long as logic, any belief but our own, and community organizing are labeled as evil, demonic, communist or whatever divisive word is currently in vogue to divide and conquer the American people. Our enemy - is ourselves, but only if we allow it. I recommend reading Howard Zinn's "People's History of the U.S." or seeing the new PBS series of that name, and the reading of "Naming Names" about the McCarthy period.