Some weeks are slow on Move America Forward's email list. Others are bustling. September 15 to 21, 2006, was an example of the latter. Six emails were sent, including two from "The Other Iraq," at the address "KDC@RMRWest.Net."

The emails are noteworthy because they illustrate synergy between two clients of the Republican-associated Sacramento public relations firm Russo Marsh & Rogers (RM&R): Move America Forward, a conservative cheerleader for the Bush administration's "war on terror," and the Kurdistan Development Corporation, an "investment holding and tradings company" formed in partnership with the Kurdistan Regional Government of northern Iraq (and presumably the KDC of the above email address).

The first of the "other Iraq" emails began, "We wanted to send you this short note to let you know that a delegation from Iraqi Kurdistan is back in the United States - continuing our campaign to tell the American public about 'The Other Iraq.'"

The message, sent on September 15, continued, "Americans helped us to win our freedom from the oppressive rule of Saddam Hussein. Thank you so very much for that. ... So far we've been to Washington, D.C. and New York and now Nashville, Tennessee. We're heading westward across America to tell our story and attract American support and investment in the new Iraqi Kurdistan."

The second email, sent September 19, invited those who "can help play a role in the rebuilding of our region's future, or [who] wish to learn more information on investment or business opportunities" to email "The Other Iraq" campaign. But most of the message focused on, as the subject line described them, "poll numbers on Iraq you haven't seen."

The poll was conducted in January 2006 by the Program on International Policy Attitudes (PIPA), a joint project of the University of Maryland's Center for International and Security Studies and the Center on Policy Attitudes. Most of the poll figures cited in the "other Iraq" email are correct, if lacking context. One, however, is demonstrably false.

The email claimed that no Iraqi Kurds agreed with the statement, "It is offensive to me to have foreign forces in my country." PIPA's report on the poll states that, of the 35 percent of Iraqis who favored U.S. forces leaving within six months, seven percent of Iraqi Kurds took the position because of the offensive nature of foreign troops, while four percent of Iraqi Kurds wanted U.S. troops out because their presence "attracts more violent attacks and makes things worse."

Apparently those Iraqi Kurds were not deemed sufficiently pro-American by RM&R and/or the Kurdistan Development Corporation to merit mention.

RM&R's work promoting Iraqi Kurdistan has been reported previously. In July 2006, as part of "a national media blitz ... to attract investment and tourism," the Kurdistan Development Corporation launched print and cable TV ads promoting "The Other Iraq," while its development office embarked upon a multi-city U.S. tour. 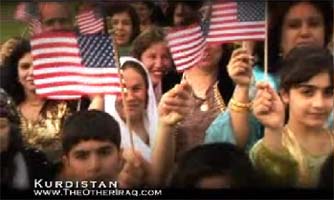 RM&R was behind the ad campaign. A spokesman told the Washington Post that the ads were part of a "pretty open-ended" deal that's likely to bring the firm "millions of dollars over a couple of years." RM&R also promoted the U.S. tour, including a July 27 San Francisco press conference that featured the Iraqi Kurd delegation and parents of U.S. soldiers killed in Iraq. "The gold star families that were invited are all supporters of the war," noted San Francsico's KGO-7.

When asked by Free Speech Radio News reporter Aaron Glantz about the complementarity of his firm's work for the Kurdistan Development Corporation and the pro-Iraq War group Move America Forward, RM&R head Sal Russo said, "There's not a relationship, other than we have a lot of clients and those are two of them."

In contrast to the July delegation, the Kurdistan Development Corporation's September visit was nearly totally ignored by news outlets. The sole article PR Watch found -- by The City Paper of Nashville, TN -- explained, "Most of the group's time will be spent promoting a new foreign investment law that touts free markets and economic incentives for foreign investments in Kurdistan." Kurdistan Development Corporation chair Bayan Sami Abdul Rahman told The City Paper, "In Kurdistan, we need everything. Whether it's hospitals, better roads or improving our school system ... these needs present opportunity for investors and American companies."

Nijyar H. Shemdin, the Kurdistan Regional Government's representative to the United States, Canada and the United Nations, told PR Watch that the Iraqi Kurd delegation visited the United States for just over a week. "The theme of the delegation was thank you, America," he said. "There is another Iraq, which is safe and secure, and you are welcome to invest there. The Kurdish parliament recently passed the investment law, and in October will ratify an investment law on oil and natural resources."

The members of the September delegation, according to Mr. Shemdin, were himself, Ms. Rahman, Bill Garaway -- and RM&R's Sal Russo.

Is RM&R a Wise Investment?

There is no doubt that Iraqi Kurds are grateful for the U.S. removal of Saddam Hussein. Human Rights Watch estimates that at least 50,000 -- and as many as 100,000 -- Iraqi Kurds were killed during the Hussein regime's genocidal Anfal military campaign of 1986 to 1989.

It's also true that the Kurdish region of northern Iraq is more peaceful, and in some ways more developed, than the rest of the country. "Kurdistan has so much to offer" the rest of Iraq, Gulf War veteran and Education for Peace in Iraq Center director Erik Gustafson told PR Watch. He added, "investment is crucially needed, but there are questions about how it's done." With regard to natural resources, he stressed the risks involved with production sharing agreements that "surrender sovereign control over oil resources to foreign corporations and allow much of the country's oil wealth to go abroad."

In response to questions about the Kurdistan Development Corporation's "The Other Iraq" campaign, Gustafson reflected that there have been "so many failures" associated with U.S.-led reconstruction efforts in Iraq that the Kurdistan Regional Government may be trying to attract private investors to make up for the missteps and diminished spending of the U.S. government. "Given that most Americans think of the entirity of Iraq as a monolithic quagmire, Iraqi Kurds will have to work hard to build confidence in the profitability of investing in Iraq's development," he pointed out. "The Iraqi diaspora can be one source of investment, but I think major U.S. corporations and wealthy private investors are higher on the itinerary." 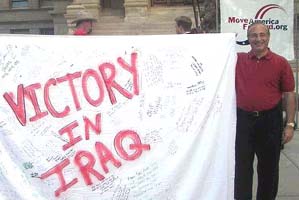 Last year, RM&R's Joe Wierzbicki told journalist Bill Berkowitz that his firm was interested in the Kurdish Development Corporation account because "of all the different groups in Iraq that have a vision for the future, the vision of the Kurds is closest to ours. It's important to recognize that the Kurds are not hostile to the West."

But why are the Iraqi Kurds working with RM&R?

RM&R's Move America Forward campaigns have included opposing the Michael Moore movie "Fahrenheit 9/11," supporting John Bolton's nomination as ambassador to the United Nations, and organizing a "Truth Tour" of Iraq, for conservative talk radio personalities. The firm's other work is with election campaigns, nearly all for U.S. Republican politicians. On the "agency experience" section of its website, RM&R lists Republicans George Pataki of New York, John Shimkus of Illinois, George Deukmejian and Howard "Buck" McKeon of California, and George Nethercutt of Washington as past clients.

Searching the RM&R website for the words "investment," "economic," or "development" yields no hits -- with the exception of one RM&R staffer's undergraduate minor in economics. A Nexis news database search confirms that RM&R and its previous incarnations (Russo Marsh Raper, Russo Marsh & Copsey, and Russo Marsh & Associates) do campaign media consulting for conservative candidates and issues. They don't do -- or at least haven't done until now -- promotion of foreign investment.

The strange pairing of RM&R and the Kurdish Development Corporation -- which aims "to promote, facilitate and establish business and investment opportunities in the Kurdistan Region in Iraq" -- can be explained in one of three ways: either the Iraqi Kurds don't realize RM&R's area of experience, or RM&R is branching out into new areas, or the Kurds believe that ties with U.S. conservative politicians will best facilitate foreign investment in their homeland. When asked about the choice of RM&R, Mr. Shemdin deferred to Ms. Rahman, who did not immediately respond to PR Watch. Stay tuned for her explanation.

Excellent article, I realisse it is a little dated now, I came across it by chance but you write really well, makes very interesting reading. I will look out for more of your blogs.
I just happened to trip over your blog post here on RM&R and the efforts to promote Kurdistan. This is clearly a classic, and wish I had found it quite awhile ago. It stands up very well, and with the combat troops being withdrawn this month, it's great to look back at your insights. Thank you!