CMD Launches OutsourcingAmericaExposed.org to "Expose the Private Companies Behind the Corporate Takeover of Public Services" 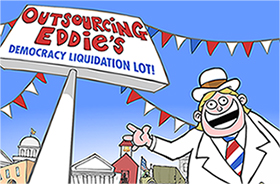 (Madison, WI) – Today, the Center for Media and Democracy (CMD), publishers of the award-winning ALECexposed.org, launched OutsourcingAmericaExposed.org, a web resource devoted to helping taxpayers identify the corporations seeking to privatize public assets and services in their communities: including their schools, roads, prisons, drinking water, court systems, and more.

Once a week for the next several weeks, CMD will unveil corporate profiles of America's most notorious corporations that are quietly working with state and local lawmakers to take over public services with little accountability, along with in-depth examinations of the CEOs personally profiting from this corporate coup. This week CMD puts the spotlight on Sodexo, the French multinational supplying food to school kids, soldiers, universities, public hospitals, and other governmental entities.

In addition to identifying a "dirty dozen" of privatizers and profiteers, OutsourcingAmericaExposed.org will feature coverage and analysis of local experiences with corporate control of public services. It will also include a regular "fine print follies" feature where CMD will expose outrageous contract language from outsourcing deals around the country that put taxpayers on the hook for guaranteeing corporate profits.

"Across the country, for-profit companies are engaged in a hostile takeover of our schools, roads, prisons, drinking water, and even local government itself," said Lisa Graves, Executive Director of the Center for Media and Democracy, adding that, "CMD's Outsourcing America Exposed project will give taxpayers the tools they need to identify these privatizers and profiteers, their eye-popping salaries, and the raw deals contained in their contracts that puts taxpayers on the hook, and it will tell taxpayers how they can take back control of public assets and public services."

The launch of the site was accompanied by a new video from renowned cartoonist Mark Fiore. In the two-minute online video, "Outsourcing Eddie" takes viewers on a tour of outsourcing deals across the country, exposing how corporations essentially guarantee themselves profits and shift all the entrepreneurial risk onto taxpayers if privatization deals go bad.

OutsourcingAmericaExposed.org comes on the heels of CMD's acclaimed ALECexposed.org, a web resource that blew the whistle on the powerful American Legislative Exchange Council (ALEC) -- which pushes legislation to outsource government to for-profit corporations that fund it -- and helped lead to more than 50 corporations leaving ALEC.

"OutsourcingAmericaExposed.org will feature the same hard-hitting, investigative reporting and 'connect-the-dots' research that made ALEC Exposed so successful," said Mary Bottari, CMD's Deputy Director, "CMD looks forward to this new interactive web resource being used by the public to expose the corporate takeover of public services."

...the outsourcing company that vetted both Edward Snowden and Aaron Alexis for their security clearances. Now, I don't mind Snowden so much, but Alexis...