by Brendan Fischer and Sara Jerving

The Center for Media and Democracy filed a letter this week requesting that the Internal Revenue Service investigate Prosperity USA, a charity founded by Herman Cain's Chief of Staff Mark Block, for potentially violating the Internal Revenue Code by fronting tens of thousands of dollars worth of Mr. Cain's campaign travel expenses. But Prosperity USA is only one node in a network of charities and nonprofit organizations associated with Mr. Block, the former head of the Wisconsin arm of the Koch-funded Americans for Prosperity.

Leaked financial documents reveal that Mr. Block's Prosperity USA spent over $40,000 of tax-exempt donations to pay for private jets, travel, and computers for Cain's presidential campaign. CMD requested the IRS investigation of the charity and Mr. Block's role in the spending after the Milwaukee Journal-Sentinel's Dan Bice broke the story on October 30.

Mr. Block was previously fined and barred for three years from political campaigns in Wisconsin to settle an election board investigation into illegal coordination between a campaign he led and a non-profit group. Following the completion of that extraordinary bar on his activities, he became the Executive Director of Americans for Prosperity in Wisconsin. His tenure there was marked by other controversies, such as allegations of vote caging. While leading AFP, Mr. Block founded or was otherwise involved in an array of "Prosperity"-related non-profits or other entities to advance the Koch agenda and also elevate Mr. Cain, including Prosperity USA where the line between the political campaign he led and the non-profit he founded was blurred if not breached. The relationship between Mr. Block, Prosperity USA, and these other groups is not clear.

Here is a quick guide to some of the organizations or entities that Mr. Block helped create, orchestrate, or advance. Based on his pattern of helping to create a variety of groups that help advance his agenda, some might be inclined to call this "the Blocktopus," similar to the complex web of groups funded by the Koch Brothers -- his main patrons -- to advance their ideological agenda. 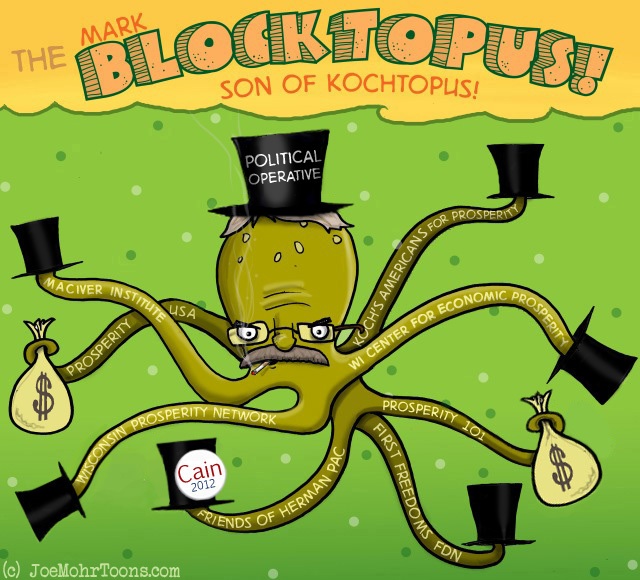 Friends of Herman Cain (FOH) is a political action committee (PAC), with Mr. Block named as treasurer. The PAC was registered with the Federal Election Commission on May 3, 2011.

Even though FOH did not officially register until May 2011, it was listed as a creditor on Prosperity USA's financial documents in February 2011. The report lists accounts receivable "Due from FOH" for over $40,000 in Cain's travel expenses and for Apple Computer iPads. The PAC began raising and spending money in January 2011.

The Washington-based watchdog group Citizens for Responsibility and Ethics, filed a complaint last week with the Federal Election Commission against FOH, Prosperity USA and Mr. Block in response to the allegations of illegal corporate contributions by Prosperity USA to the Cain campaign.

On July 31, 2010, the corporation filed an amendment with the state to change its name to "Prosperity USA, Inc." At that time, "Mark. J. Block" was listed as the president of the corporation. The organization's latest filing from July 31, 2010 shows Block to be president of the organization. He is currently listed as its registered agent on the State of Wisconsin Department of Financial Institutions website.

Prosperity USA's known spending on Mr. Cain's campaign expenses appears to have occurred in January or February of 2011, well after the period Mr. Cain became a "candidate" within the meaning of Code section 501(c)(3), in the view of the Center, and after Mr. Block became his campaign's chief of staff.

The Prosperity USA Coalition registered with the state on September 30, 2010. Its registered agent resigned on June 23, 2011, and its principal office is listed as Mr. Dean's address, 20975 Swenson Drive, Suite 125, in Waukesha, Wisconsin, which is also the listed address for the First Freedoms Foundation. (It is also the same suite number that has been listed for an exterminator and a Spanish publications business.)

Wisconsin's Americans for Prosperity (AFP) is the state arm of the national group started by oil billionaire David Koch and Richard Fink (a member of the board of directors of Koch Industries). North Carolina's Art Pope also sits on the board of the national organization that Mr. Koch chairs. On December 7, 2010, Mr. Block announced that he would be resigning from AFP on December 31 to join the Cain campaign as Chief of Staff.

AFP is also listed on the Prosperity USA financial documents. Prosperity USA apparently spent between $15,400 and $17,900 on other travel by Cain to AFP events in states across the country earlier this year, with the expectation those expenses would be reimbursed by AFP. Under Accounts Receivable, the financial statement says "From AFP – H. Cain travel – Hill Aircraft" (a private jet service) and then enumerates trips and expenses.

The Wisconsin Prosperity Network (WPN) was launched in 2009 by Mr. Block along with a politician who had run afoul of campaign finance law, former Assembly Speaker Scott Jensen. Linda Hansen, who now works as Mr. Block's Deputy Chief of Staff on the Cain campaign, is its Senior Vice President, Executive Director. It is a 501(c)(3) that has told the Wisconsin Supreme Court it "acts, in part, to coordinate the efforts" of organizations like the Wisconsin branch of Americans for Prosperity. Upon its formation in 2009, WPN announced plans to spend $6.4 million per year underwriting 14 organizations to advance the right-wing agenda.

One of the organizations "coordinated" by WPN is the MacIver Institute, which describes itself as a "think tank," which received at least $300,000 in funding from the Milwaukee-based Lynde and Harry Bradley Foundation, and swung into action in Spring 2011 in support of Governor Walker's agenda.

Notably, WPN held a fundraiser for itself featuring Mr. Cain on August 19, 2010 but asked people to "register at http://www.thehermanatorpac.com/eauclaire" while asking people to make checks payable to "Wisconsin Prosperity Network," listing the same address as Mr. Block's ProsperityUSA, "PO Box 510626, New Berlin, WI 53151," which is also the same address that has been listed for Prosperity101.

Like the Prosperity USA Coalition, state filings for Wisconsin Prosperity Network show its registered agent resigned on June 23, 2011, and its principal office is now listed as Mr. Dean's mailing address. Documents obtained by the Milwaukee Journal-Sentinel indicate that the registered agent for WPN had been Michael Dean.

Prosperity 101 has as its stated mission "To help employees understand how public policy affects the stability of their own jobs by becoming Informed, Involved, Impactful™" and offers handbooks, speakers, and online classes for companies to "instruct" employees about free market policies. Alternet says "Prosperity 101 preaches an anti-union, anti-government gospel to workers right in their own workplaces."

The Prosperity 101 program was reportedly presented in at least a dozen workplaces at the height of the 2010 elections, most of them in Wisconsin. Menards hardware store was one of those businesses, whose owner John Menard was a Walker donor and sits on the board of the powerful business lobby Wisconsin Manufacturers and Commerce (WMC). The gas station and convenience store chain Kwik Trip, another major Walker donor, also invited Prosperity 101 to "educate" its employees during the election season. Same with Wausau Homes, whose co-owners and the co-founder's wife gave Walker a total of $25,000 during the 2010 election, and which received a major tax break in Walker's budget.

Prosperity 101, unsurprisingly, furthers the "prosperity" meme. A Prosperity 101 product called Job Security Through Business Prosperity™ "covers the Foundations of Prosperity, Policies of Prosperity and Protecting Your Prosperity, which guides the reader to important action steps to protect their economic freedoms and personal prosperity. They are encouraged to become Informed, Involved and Impactful™"

Hansen has said publicly that Prosperity 101 is part of the Wisconsin Prosperity Network.

Although Prosperity 101 is a for-profit LLC, its website "Prosperity101.org" registered under the non-profit "America's Prosperity Network" (now Prosperity USA) by "Mark Block" in December 2009. Its registration and email resolve to an email account with the name "mjbcain@gmail.com," which includes Mr. Block's initials and Mr. Cain's name. The site called "AmericasProsperityNetwork.org" was created on March 29, 2010, with the same registration information and email account as Prosperity101.org.

First Freedoms Foundation is a non-profit group that claims that it seeks to defend "historic constitutional liberties and principles in Wisconsin." It is also "coordinated" by the Wisconsin Prosperity Network. Mr. Block began showing up on the group's Federal 990 forms in 2007, and is currently listed as treasurer for the organization. Mr. Dean has been listed as the leader of this group that focuses on issues like opposing rights for same-sex couples in Wisconsin.

The Wisconsin Center for Economic Prosperity (WCEP) is a PAC. During 2009 and 2010, AFP held conferences in Wisconsin and invited activists to attend a closing "reception" with "invited candidates for elected office" that was "fully sponsored and hosted" by WCEP. This may have been an attempt by AFP to avoid restrictions on non-profit involvement in partisan political activities, such as funding a reception for federal and state candidates. At the time of the conventions, WCEP shared leadership with AFP. Federal filings showed that at least one of WCEP's checking accounts was in the name of Mark Block.

As a PAC, WCEP is supposed to report all expenditures to the federal government, as well as comply with state disclosure rules in state races. But it reported no expenses related to its "sponsorship" of the AFP receptions in 2009 and 2010. Mr. Block's WCEP has not been charged with wrongdoing, but it has received four "failure to file" notices from the Federal Elections Commission.

WCEP is also one of three plaintiffs challenging Wisconsin's "Impartial Justice Act" that provides public financing of Supreme Court elections, a system designed to protect against the politicization of the state's highest court.

The Center has noted in its letter to the IRS that none of the groups (other than Prosperity USA) is being accused of any wrongdoing. It has only asked the IRS to examine Mr. Block's relationship with these groups given the most recent revelations about Prosperity USA and his history of blurring the lines between electoral objectives and non-profit groups.

I just HAD to comment on this article - it represents a consistent focus on good solid journalism. I speed read through hundreds of articles each day, and few force me to slow down. PR Watch is one of my governors. Plaudits.
Menard's is expanding in the Cincinnati-Dayton area. Thank you for the article. I have referred it to friends and family. Each of us can, then, decide to avoid Menard's.