Rand Paul Is Working with ALEC to Suppress the Vote 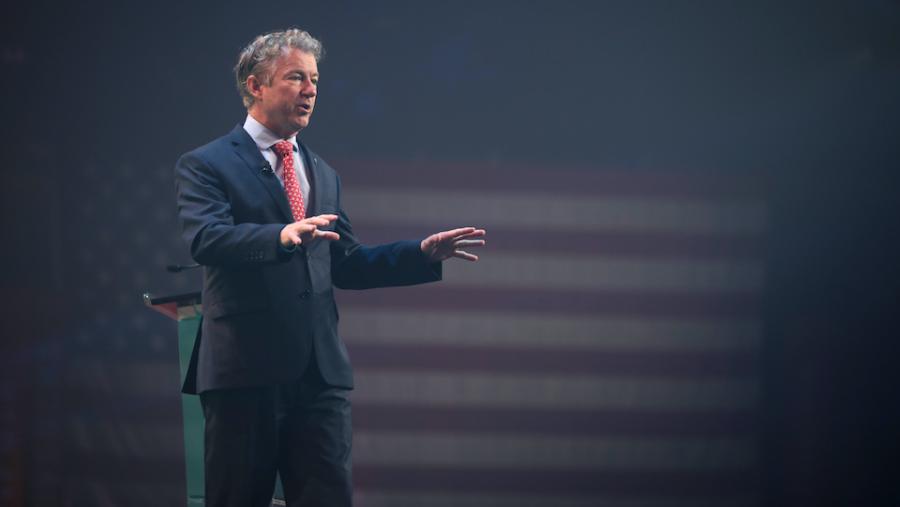 In a live-streamed video on April 19, Paul told Kevin Roberts, executive director of the Texas Public Policy Foundation, an affiliate of the right-wing State Policy Network, that he has "been speaking to legislators through ALEC" about conservative electoral reform priorities since the November 2020 election.

Paul's statement comes on the heels of the revelation that ALEC and the State Policy Network are working with Heritage Action for America on its $24 million plan to push new voting restrictions in eight states.

While admitting that challenges to the 2020 election results―many filed by former President Donald Trump and his allies―failed to convince courts of voter fraud or unlawful conduct by local or state elections officials, Paul insisted state legislatures must forge ahead with his proposals to curtail mail-in voting and politicize the administration of elections.

ALEC, registered as a nonpartisan, tax-exempt organization, claimed to have suspended its work on voting and elections in 2012 when it disbanded its Public Safety and Elections Task Force in the wake of public outcry and the departure of corporate members seeking to distance themselves from ALEC's role in pushing controversial voter ID and "Stand Your Ground" legislation.

However, ALEC revived a secret Political Process Working Group in 2019, which has actively pushed voter fraud myths and partisan gerrymandering strategies to a receptive audience of GOP lawmakers.

A Center for Media and Democracy examination of voter suppression bills in six battleground states found more than 100 Republican politicians listed as lead sponsors or co-sponsors of 2021 legislation are connected to ALEC. In the first three months of 2021, lawmakers in 47 states introduced more than 360 bills that would restrict voting access, according to the Brennan Center for Justice.

In addition to repeating lies about "election fraud" in Wisconsin and elsewhere during the 2020 general election, Paul outlined three policy reforms, which have already been introduced in various iterations in state legislatures across the country:

Paul recycled falsehoods about voter fraud that Trump and many GOP politicians perpetuated after the 2020 election, alleging that in states where many voters vote by mail, "drip by drip, [Democrats] keep finding votes. They keep harvesting the votes until they get it."

The reality is that mail-in ballots take longer to count, and in some GOP-led states, lawmakers prevented election officials from beginning the mail-in vote count until Election Day. Thus, there were huge backlogs of ballots for officials to carefully count, and results trickled in after much of the Election Day votes were already tabulated. Republicans cynically used the vote counting delays to falsely allege the election was rigged against Trump.

Paul called Travis County, Texas, which is home to the state capital of Austin, "a communist oasis in the middle of conservative Texas." He said that "rebellious" election officials in Travis County and Harris County, which set records for voter participation by instituting 24-hour voting, should not have the ability to set their own voting practices, claiming they overruled state law. Republican state lawmakers are currently attempting to outlaw some of the voter access methods that Harris County used in its hugely successful elections last year.

Not surprisingly, CMD found one of largest state delegations to ALEC in Texas, with 31 percent of the state's House and 35 percent of its Senate having documented ties to ALEC.

During its 2021 Policy Orientation in January, which was scheduled to coincide with the start of the legislative session, Texas Public Policy Foundation announced a national Election Protection Project led by Congressman Michael McCaul (TX-10). In a press release, TPPF said the project would seek to restore "election integrity" by "working with state officials and organizations to propose legislative measures to enhance and bolster the security and integrity of our nation's election system." These measures include pursuing voter ID requirements for in-person and mail-in voting and monitoring voter rolls.

The second panel, Election 2020: What Happened and What Does it Mean for the Future?, included Rachel Bovard, senior policy director with the Trump administration-tied Conservative Partnership Institute; The Federalist's political editor, John Davidson; and Matt Braynard, executive director of the Trump-tied voter suppression group Look Ahead America.