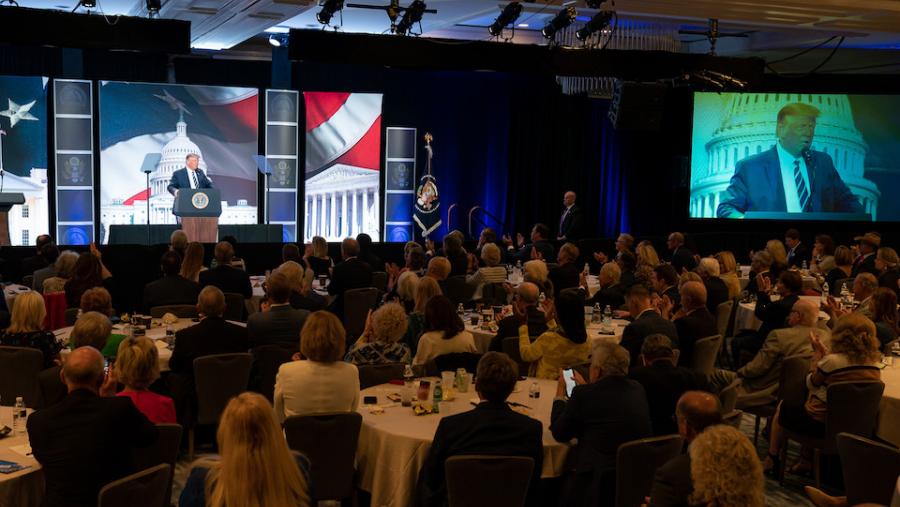 With last night's confirmation of religious conservative Amy Coney Barrett to the U.S. Supreme Court, the Council for National Policy (CNP) has a lot to celebrate.

The secretive Christian right-wing group "has been strategizing to dominate the Supreme Court for decades," according to Columbia University professor and CNP expert Anne Nelson, and had 15 members in attendance for Barrett's superspreader Rose Garden nomination ceremony in September, the Associated Press reported.

But CNP's role in bolstering the Trump administration goes well beyond the Court. The agenda for its August meeting, obtained by the Center for Media and Democracy (CMD) from investigative researcher Brent Allpress, demonstrates the ostensibly nonpartisan group's strong ties to Trump and the Republican Party.

The event, held at the Ritz-Carlton in Arlington, Virginia, covered COVID, healthcare, elections, China, and "Exposing the Black Lives Matter Movement," and an off-agenda appearance by Trump.

Parts of the meeting were recently exposed in The Washington Post on October 14 by Robert O'Harrow, but the full agenda is being first made public here.

Whitaker, who briefly served as AG after Jeff Sessions’ resignation, was recommended for that position by Leonard Leo, a CNP Board of Governor's member and Trump's go-to for federal judicial candidates.

All three lawyers have ties to Leo's Federalist Society, which Leo now co-chairs, and are connected to the Trump administration. Fox News talking head diGenova is an informal advisor to Trump. Powell, dubbed the “#MAGA Lawyer” by Politico, is currently the attorney for Trump's former disgraced national security advisor Michael Flynn. And Severino, president of the Judicial Crisis Network (JCN), has led efforts to get Trump's judicial nominees confirmed and attended Barrett's Rose Garden nomination ceremony.

The close ties between the Trump administration and CNP are well documented. Trump himself spoke to CNP on the last day of the meeting where he thanked CNP's ranks repeatedly and for their leadership.

Trump's vice president Mike Pence went further than Trump in thanking CNP in November 2019, for "standing by him" and for counsel "every single day." And Pence followed up in March of this year in a letter made public by Allpress in which he "thanked the Council for National Policy for your support and for consistently amplifying the agenda of President Trump and our Administration."

The agenda shows that Dr. Paul S. Teller, Deputy Assistant to the President and Director of Strategic Initiatives for the Vice President, gave a "White House Update" and spoke on the influence of the Conservative Action Project, the "little secretive huddle that meets every Wednesday morning," as O'Harrow reported. Acting U.S. Department of Homeland Security Secretary Chad Wolf also spoke.

As the numbers of dead and hospitalized due to COVID-19 continued to mount, CNP held a panel at the meeting, "Protecting the Doctor-Patient Relationship During COVID," that featured Jenny Beth Martin, CNP's Executive Committee Secretary and founder of Tea Party Patriots, and Simone Gold, founder of the pro-Trump America's Frontline Doctors.

Both Martin and Gold were at a botched July 27 event promoting hydroxychloroquine as a "cure" for COVID-19.

In May, CMD leaked a recording of a call organized by CNP Action, CNP's 501(c)(4) affiliate, to the Associated Press that included CNP President William Walton, CNP member Nancy Schulze, and Mercedes Schlapp, a senior adviser to the Trump campaign. "There is a coalition of doctors who are extremely pro-Trump that have been preparing and coming together for the war ahead in the campaign on health care," Schulze said on the call. "And we have doctors that are … in the trenches, that are saying 'It's time to reopen.'"

Martin and Gold also pushed for  a rapid reopening of the economy and schools, and against masks at a July 7 White House event with Trump, according to a piece for The Washington Spectator by Nelson. Nelson is the author of a book on CNP entitled Shadow Network: Media, Money, and the Secret Hub of the Radical Right.

CMD reported in September that the Job Creators Network (JCN) is running an ad campaign called “Unlock Our Schools,” which blames public school teachers' unions for full or partial shutdowns of in-person classes, claiming that union leaders are "holding kids hostage" and "using the coronavirus crisis to push for policies such as Medicare for All and increased taxes on billionaires, and to oppose school privatization."

Martin, Gold, Walton, and Ortiz are all active in the "Save Our Country" coalition formed in April and chaired by the American Legislative Exchange Council's (ALEC) favorite economist Art Laffer to push for the reopening of the country.

Of the twenty people serving on Save Our Country's "National Leadership Council," half were CNP members as of September 2020:

CNP's meeting agenda shows that the videos discussing voter suppression leaked to The Washington Post were part of another two-part panel on so-called "Election Integrity." Both were facilitated by Judicial Watch president Thomas Fitton, who told attendees, "We need to stop those [vote-by-mail] ballots from going out, and I want the lawyers here to tell us what to do."

A who's who of the right-wing's voter suppression advocates joined Fitton including: J. Christian Adams, president and general counsel of the Public Interest Legal Foundation (PILF); Cleta Mitchell, PILF's chairman of the board and partner at Foley and Lardner, LLP; and Hans von Spakovsky, PILF board member and senior legal fellow at The Heritage Foundation.

"Be not afraid of the accusations that you're a voter suppressor, you're a racist and so forth," Adams told CNP members at the meeting.

Adams and Spakovsky, along with Leo's Honest Election Project (HEP), True the Vote and Election Integrity Project California (EIPC), have been leading the effort to delegitimize mail-in voting, CMD reported. EIPC's president and co-founder Linda Paine is a Board of Governor's member of CNP.

In addition, these groups along with Judicial Watch, True the Vote, Wisconsin Institute for Law and Liberty, are fighting to purge voter rolls across the country.