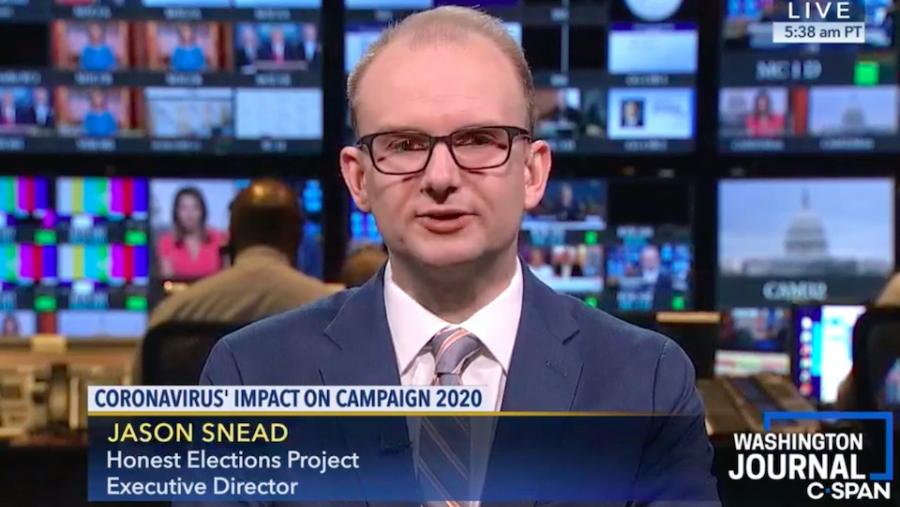 Two groups in the well-funded influence network of Leonard Leo, the Trump confidant and right-wing operative credited with moving our nation's federal courts to the Right, held a webinar for the State Policy Network (SPN) on voter fraud messaging in August.

SPN, a web of 162 right-wing "think tanks" and tax-exempt organizations in 50 states, Washington, D.C., Canada, and the United Kingdom, promoted the webinar available to members only on its website on August 17.

Jason Snead, executive director of the Honest Elections Project, and Brett Loyd, president and CEO of a public relations firm called "the polling company" schooled SPN members on how they "can engage on this issue in a productive and constructive way," according to the blog post.

Honest Elections Project is a dark money voter suppression group formed in February that is a project of Leo's 85 Fund (a rebrand of Judicial Education Project), and Snead is a former senior policy analyst for the Heritage Foundation, where he was tasked with developing the Heritage Election Fraud Database.

Researchers at the Brennan Center who reviewed the database concluded that it "grossly exaggerated" the extent of voter fraud and provided instances amounting to only "a molecular fraction of the votes cast nationwide."

The polling company, founded by Trump's senior advisor Kellyanne Conway, was acquired by Leo's CRC Advisors, then Creative Response Concepts, in 2017. Leo told Axios in January that he was stepping down from running the right-wing Federalist Society to lead CRC Advisors with communications executive Greg Mueller, starting with a "minimum $10 million issue advocacy campaign focusing on judges in the 2020 cycle."

The webinar presented polling results and messaging points to SPN members aimed at playing up fears of voter fraud to oppose the pandemic-related push for widespread voting by mail.

Interestingly, the poll found that, "Partisan messaging didn't resonate with people ("mail-in voting is bad because it gives Democrats/Republicans a political advantage")." But the poll's other results reflect the success of the Trump administration and GOP-aligned groups to stir up public fear over voter fraud. For example, 90 percent of those surveyed believe voter ID should be applied to absentee balloting; 67 percent believe in election fraud; and 67 percent believe that "mailing everyone a ballot while legalizing vote harvesting" will increase the likelihood of fraud.

This is despite the fact that research shows that, "election fraud has been rare in this country for decades," as Richard L. Hasen, a professor of law and political science at the University of California at Irvine School of Law wrote in The Washington Post.

The message the Honest Elections Project is pushing is that, "a rushed or mandated vote-by-mail system will leave voters with grave doubts, whether real or perceived, about the legitimacy of the election" and that "voters do not have to choose between their safety and the integrity of their elections."

SPN members heard from other prominent right-wing talking heads on voter suppression at their annual meeting that meets virtually this week, including Public Interest Legal Foundation's J. Christian Adams and The Heritage Foundation's Hans von Spakovsky, in a panel titled, "Safeguarding Election 2020: What to Expect and How to Respond."

Adams and von Spakovsky both participated in a webinar on "election integrity" hosted by the right-wing Bradley Foundation's president and CEO Richard Graber on August 18, alongside Rick Esenberg, Bradley's "MVP" of the Wisconsin right-wing infrastructure Wisconsin Institute for Law and Liberty. A link to that webinar is published at the bottom of the SPN blog post.

An invitation obtained by the Center for Media and Democracy shows that on June 9, ALEC hosted an "exclusive call with Former FEC Official & Honest Elections" on "mail-in voting" for its members. Heritage's von Spakovsky is a former member of the Federal Elections Commission and has spoken at other ALEC meetings in the past.

"These special interest groups are not really interested in protecting the integrity of our elections. Their efforts are simply a cynical political strategy to spread fear and confusion in order to suppress voting rights and help President Trump's re-election chances," Sylvia Albert, director of voting and elections at Common Cause told CMD. "They ignore the truth that vote by mail is a tried and tested secure process and instead force Americans to choose between their health and right to vote during a pandemic."