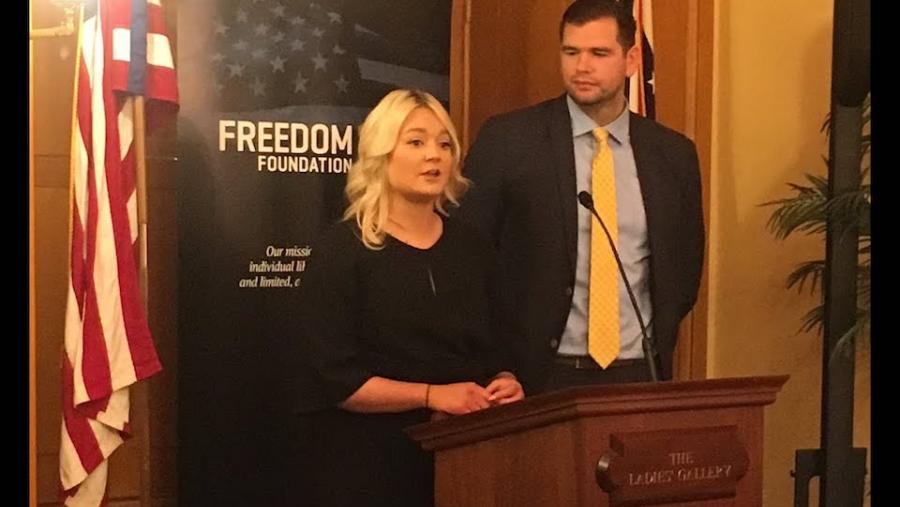 The two organizations leading the fight to defund public employee unions in Ohio are being bankrolled by many of the same deep-pocket out-of-state funders tied to big corporations and billionaires, the Center for Media and Democracy (CMD) has found.

A CMD investigation found that the two groups, the Buckeye Institute and the Freedom Foundation, received more than $9 million from 11 common out-of-state funders between 2014-18. Funding information for 2019 is not yet available.

After focusing efforts on the west coast for years, the Freedom Foundation launched operations in Ohio in early November last year, with a mission "to limit the undue influence of government unions over our political system."

On March 27, the Freedom Foundation used the coronavirus pandemic in the state as an opportunity to advocate for defunding of Ohio public unions through a "three-month suspension on public-sector dues collections from employee paychecks." Ignoring the work unions do to obtain fair wages, quality healthcare, and benefits for its members, Freedom Foundation CEO Tom McCabe stated, "Gov. DeWine has a great opportunity here to take immediate action that would help a lot of people in need."

McCabe also asked the Governors of California, Oregon, Pennsylvania, and Washington, as well as the federal government to do the same.

Then, on May 1, International Workers' Day, Freedom Foundation delivered 462 letters to Gov. DeWine on behalf of public employees who want to resign from their unions and stop having union dues deducted from their paychecks.

The Buckeye Institute has touted that it was "the first organization in the country to file lawsuits calling on courts to end compelled exclusive representation following the Janus decision." "Janus" is a reference to the U.S. Supreme Court's June 2018 Janus vs. AFSCME decision, which held that public sector unions could no longer require individuals in a bargaining unit who did not want to be members of the union to pay agency or "fair share" fees. Fair share fees compensate unions, which are required by law to represent all workers in a bargaining unit, for their efforts to obtain higher wages and improve working conditions.

That controversial ruling was the culmination of decade-long, multi-million dollar campaign to cripple unions mounted by corporate interests, right-wing foundations, and conservative think tanks, CMD previously reported in In These Times.

So far, Buckeye has lost its legal challenges to laws in Ohio, Minnesota, and Maine requiring a public employer to negotiate exclusively with a democratically elected union representative for better wages and benefits once the union has been certified as a bargaining unit, CMD reported.

Both the Buckeye Institute and the Freedom Foundation's post-Janus legal activities were featured in an American Legislative Exchange Council (ALEC) booklet detailing its anti-worker agenda in the states that CMD exposed last month. The two also filed amicus briefs, or "friend of the court" briefs in support of Janus when the case was before the Supreme Court.

Freedom Foundation and Buckeye Institute both were quick to launch so-called "opt-out" sites designed to convince public union members to stop paying their dues as part of the State Policy Network (SPN)'s massive effort to "defund and defang" unions after the Supreme Court's Janus decision.

Although Buckeye Institute and Freedom Foundation are distinct organizations, the two groups are both affiliate members of SPN, a web of right-wing "think tanks" and tax-exempt organizations in 50 states, Washington, D.C., Canada, and the United Kingdom, as well as members of the Rick Berman front group the Interstate Policy Alliance (IPA).

Berman, called the "Astroturf Kingpin" for his repeated use of the strategy of forming dozens of non-profit front groups, attack-dog web sites, and "think tanks" that defend his corporate clients' interests by attacking their critics, has made millions off attacking unions. "I get up every morning and I try and figure out how to screw with the labor unions," Berman once said on a tape obtained by CMD.

Berman recently sounded the alarm to his clients on the opportunity the coronavirus pandemic offers union organizers in a memo reported on in The Intercept, "This is the first time since the early 1980s where I sense significant interest by employees in 'collective action' and '3rd party representation,'" Berman said.

As 501(c)3 registered nonprofits, the Buckeye Institute and the Freedom Foundation are not required to disclose their donors, but CMD was able to identify eleven 11 donors who gave a total of $9.1 million to the two groups between 2014 and 2018.

Leading the pack are the Bradley Foundation, Charles Koch, and the preferred donor conduits of the Koch political network.

The Milwaukee-based Bradley Foundation, with $854.2 million in assets, has worked to defund and dismantle unions under the guise of "worker freedom" for close to two decades, as CMD exposed in 2017. Since 2014, it has given $505,000 to Buckeye and $2.9 million to the Freedom Foundation through the Foundation and the Bradley Impact Fund (BIF). Bradley set up BIF to attract new donors to fund its efforts, offering a layer of anonymity.

A 2017 investigation by CMD revealed that the Bradley Foundation has spent millions to defund and dismantle labor unions as part of a national strategy to cripple progressive and Democratic causes while building a pro-Republican infrastructure in the states.

The Charles Koch Foundation gave $408,000 to Buckeye and $275,000 to the Freedom Foundation between 2016 and 2018. Charles Koch has "never abandoned [the John Birch Society's] core anti-union agenda and the lessons of his father's commitment to right-to-work," Lisa Graves reported for In These Times.

Over the years, Koch has heavily invested in right-wing groups that have supported so-called right-to-work laws and demonized collective bargaining rights, including the American Legislative Exchange Council (ALEC), Americans for Prosperity, the Cato Institute, Reason, and the State Policy Network, and many others.

DonorsTrust and Donors Capital Fund, donor-advised funds (DAFs) used by the Koch political network, chipped in another $2.5 million to Buckeye and $335,650 to the Freedom Foundation between 2014 and 2018.