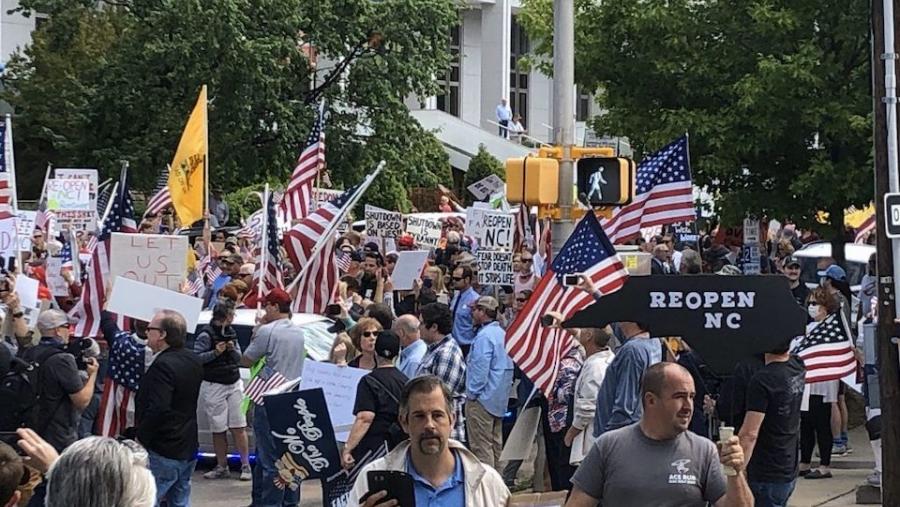 Since the "spontaneous" anti-lockdown protests began last week, it has become more and more obvious that the movement is being coordinated and financed, at least in part, by big-money right-wing interests, including some of the same forces that sparked the Tea Party in 2009.

FreedomWorks, a group that grew out of a Charles Koch-founded organization and that helped launch the Tea Party in 2009, is organizing some of the protests, holding virtual town halls, and "igniting an activist base of thousands of supporters across the nation to back up the effort." The FreedomWorks website features a calendar of upcoming protests, and it is polling on the protests in swing districts, reportedly sharing the data with President Donald Trump's economic task force.

In advance of the Wisconsin protests that began on April 18, Stephen Moore said on a YouTube program that he was "working with a group in Wisconsin that wants to do a drive-in" and that one major donor had promised to pay the bail and legal fees of any protesters who were arrested. Moore, a senior economic contributor to FreedomWorks, is a Trump ally, has close ties to the American Legislative Exchange Council (ALEC), and is a distinguished fellow on temporary leave from the conservative Heritage Foundation, both of which are partially funded by Charles Koch and Koch Industries.

Convention of States Action (COSA), another conservative group in billionaire industrialist Koch's funding network, is also helping mobilize the protests, which have sprung up in states such as Michigan, North Carolina, Ohio, and Wisconsin and have seen many participants not wearing masks or socially distancing. COSA is a project of the right-wing nonprofit, Citizens for Self-Governance, and has a web page devoted to its new initiative, "Open the States."

"A spontaneous citizen movement to tell the federal government, and state and local governments that We the People say it's time to Open the States," declares the page. Below this line is a video advertising the "Open the States" campaign.

The page provides users ways to urge Trump and state and federal officials to "re-open American for business." It features a U.S. map that identifies the main protest organizing group in nearly every state, with links to those groups' Facebook pages. And there's another page with a list of additional groups, with links. 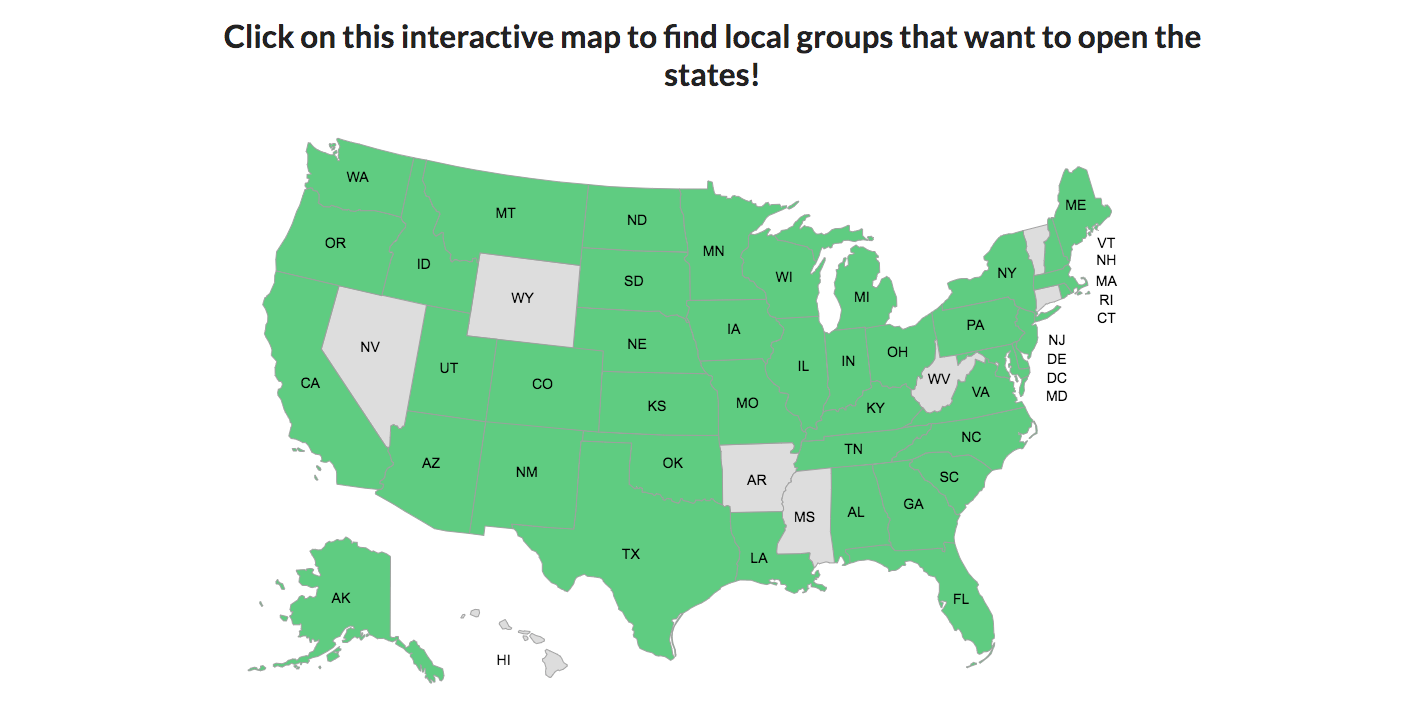 COSA argues that "only a small number of counties have experienced high rates of COVID-19 hospitalizations and deaths," and, thus, statewide shutdowns should not happen. "Decisions to open the economy and return to work can largely be left with local officials," the group states.

A bipartisan majority—72 percent of U.S. adults—however, believe that people should stay at home "until the doctors and public health officials say it is safe," according to the latest Reuters/Ipsos online poll.

"At OpenTheStates.com, you can get plugged in to your local group dedicated to re-opening your community's economy," COSA says. "These groups are not affiliated with the [COSA], but we want to give all our supporters and volunteers an opportunity to get involved."

COSA indicated in an April 21 blog post that it is building a forum and other tools into the openthestates.com site after Facebook removed "Reopen" events from its site. The group has advertised the site and asked for money, on Facebook. 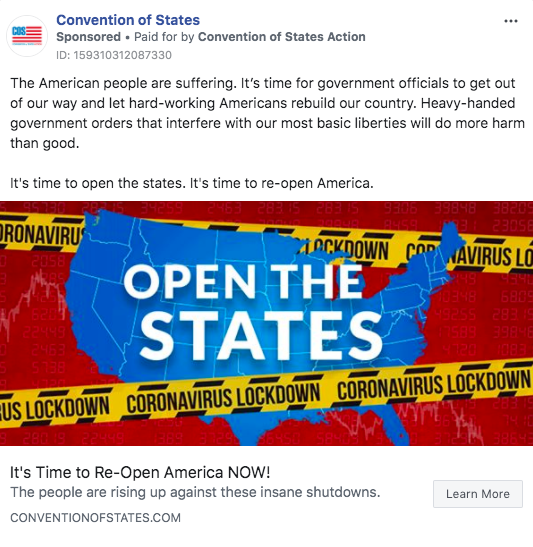 In addition, an organization heavily funded by the family of Education Sec. Betsy DeVos also helped plan a protest at the Michigan state Capitol. The DeVos-funded Mackinac Center promoted the Michigan protest, named "Operation Gridlock." Another organizer of the protest, Michigan Conservatives, is led by Meshawn Maddock, an adviser to Trump's presidential campaign.

Citizens for Self-Governance-a 501(c)(3) nonprofit formerly known as the John Hancock Committee for the States that does business as the Convention of States Foundation (COSF)-and its affiliates have been working for years on a plan to hold an Article V convention to amend the U.S. Constitution. A 2016 Convention of States mock convention passed amendments on the rightwing's bucket list, such as easing the process to repeal federal regulations, requiring approval to increase the national debt, imposing congressional term limits, repealing the 16th Amendment's authorization for an income tax, limiting the Commerce Clause, and requiring a supermajority to impose federal taxes.

Additional right-wing groups have been working on their own Article V plans, which have been coordinated through ALEC and bankrolled by the Koch funders network as well.

More than 200 organizations, including the Center for Media and Democracy, signed onto a letter in April 2017 denouncing an Article V convention as "a dangerous threat to the U.S. Constitution, our democracy, and our civil rights and liberties.

Since 2014, COSF has been financed by funds connected to Koch and donors in the Koch political network.

Donors Capital Fund, a conduit for charitable donations by right-wing philanthropists including Koch, gave COSF $2.5 million from 2015-16, and DonorsTrust, a sister conduit, gave nearly $100,000 in 2014. Also in 2014, the family foundation of GOP megadonor Robert Mercer donated $500,000.

The Judicial Education Project, a legal nonprofit closely tied to the conservative Federalist Society and its co-chairman, Leonard Leo, gave COSF $950,000 in 2016. DonorsTrust, Donors Capital Fund, the Charles Koch Foundation, and the Mercer Family Foundation have given the Federalist Society millions of dollars since 2014. CSG Action, another 501(c)(4) affiliate of COSF, received large donations from multiple nonprofits tied to Leo in 2016, as well as $10,000 from the Koch-founded Citizens for a Strong Economy in 2015.

The biggest donor in recent years is Vanguard Charitable, a donor-advised fund sponsor that channels its clients' money to charitable nonprofits, which has given COSF nearly $5.1 million since 2014. Another major donor is the Armrod Foundation, which contributed $600,000 from 2015-17.

It's more difficult to identify donors to Convention of States Action (COSA), but the Deramus Foundation gave $275,000 to "Convention of the States," according to recent tax records that specified a COSA location in Purcellville, Virginia, the same city that COSA lists on its LinkedIn page.

COSF, which is led by Mark Meckler, a co-founder of the Tea Party Patriots, has still more connections to Koch and his political network. Meckler appears to be using the coronavirus crisis as an opportunity to bring more money into COSA's bank account by creating a paid, membership-based "online community...to keep everyone feeling sane, entertained, mentally stimulated," according to an email sent by COSA.

Political operative and Koch associate Eric O'Keefe is board chairman at COSF and COSA and a director of CSG Action. He is also director of the Wisconsin Club for Growth, a political organization that has received funding from Koch-connected groups. As the Libertarian Party's national field director, he helped manage the campaign of Koch's brother, David, who ran for vice president on the Libertarian ticket in 1980.

Tim Dunn, an oil executive and a founding director of COSF, COSA, and CSG Action, is vice chairman of the Texas Public Policy Foundation, a think tank that is heavily funded by the Koch Foundation and allied right-wing charities. The policy shop has been outspoken in its criticism of Texas's lockdown, with its director penning an op-ed that cites the protests and declares, "It's time to reopen the U.S. economy."

Another COSA director, oil investor Kyle Stallings, is also on the board of the Texas Public Policy Foundation. Stallings is a major donor to political group Empower Texans, which is tied to the policy foundation and the Koch network. Dunn founded Empower Texans.

COSF is closely tied to ALEC, a corporate bill mill linked with Koch operatives that has been funded by Koch Industries and Koch family foundations. ALEC, too, is pushing back against mandatory business closures. FreedomWorks' Moore is a member of ALEC's Private Enterprise Advisory Council. FreedomWorks recently registered at least two websites, reopenoureconomy.com and reopensociety.com, concerned with ending the business closures. Reopenoureconomy.com is the site of "Save Our Country," a joint initiative of FreedomWorks, the Tea Party Patriots, and ALEC that has advised the White House on a strategy to reopen the economy.

A communications agency launched by Koch, In Pursuit Of, registered the site reopenmississippi.com on April 16.

Koch's premier political nonprofit, Americans for Prosperity, which helped launch the Tea Party, has not publicly endorsed the coronavirus-related protests. AFP CEO Emily Seidel said the protests are "‘not the best way' to ‘get people back to work.'" But AFP was "an early shutdown opponent," saying, "Rather than blanket shutdowns, the government should allow businesses to continue to adapt and innovate to produce the goods and services Americans need." State branches of Americans for Prosperity have been harshly criticizing governors' shelter-in-place orders.