Ex-Pharma Lobbyist Embedded in White House Tanked Drug Pricing Bill, While His Former Employer Helped From the Outside | PR Watch

Ex-Pharma Lobbyist Embedded in White House Tanked Drug Pricing Bill, While His Former Employer Helped From the Outside 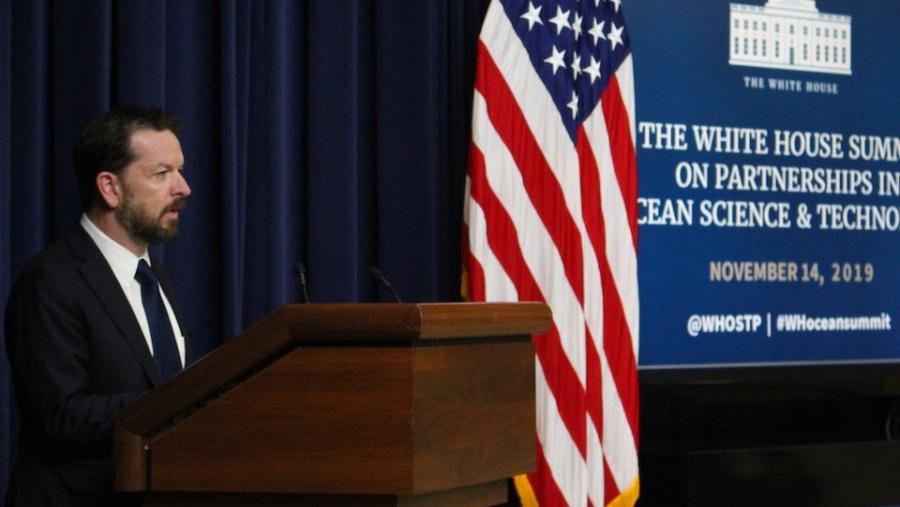 In 2016, presidential candidate Donald Trump told voters that lowering drug prices would be a top priority of his domestic agenda. When House Speaker Nancy Pelosi's (D-CA) introduced a bill to lower drug costs, Trump greeted it with enthusiasm. But in October, Trump executed an about-face, abandoning negotiations on the House bill, claiming it would "harm seniors," and threatening to veto the bill if it passed the Senate.

The House bill--H.R. 3, the Elijah E. Cummings Lower Drug Costs Now Act--would increase the power of the government to negotiate with pharmaceutical companies for lower prices. But Trump's top healthcare adviser, former Gilead Sciences lobbyist Joe Grogan, strenuously lobbied within the White House and on Capitol Hill against price negotiations, claiming they would allow "a bureaucrat to dictate prices for the most innovative medicines" and "put companies out of business."

Opposition to the House bill from Grogan and Health and Human Services Secretary Alex Azar--himself a former lobbyist for drug giant Eli Lilly and then President of its U.S. division--turned Trump around and successfully steered the White House to back a more modest measure in the Senate.

The head of the pharmaceutical industry's biggest lobbying group said that the House legislation would be "devastating" to his industry.

"This type of policy would have a devastating effect on the industry and the patients that we serve and we're going to continue to take it very seriously and engage with policymakers accordingly," said Steve Ubl, CEO of the Pharmaceutical Researchers and Manufacturers of America (PhRMA).

Ubl went on to claim that the bill, which would allow the government to negotiate with pharmaceutical companies on the prices of up to 250 medications and cap maximum prices, would cause a "nuclear winter" for the U.S. biopharmaceutical industry.

The Congressional Budget Office predicted a less dramatic effect of H.R. 3, estimating that a considerable decrease in revenue for the drug companies would result in eight to 15 fewer drugs coming to market over the next decade. Meanwhile, the Medicare program would save $345 billion between 2023 and 2029, and premiums for beneficiaries in the Medicare Part D prescription drug program would become less expensive.

On Dec. 31, Reuters reported that GlaxoSmithKline, Pfizer, and Sanofi SA plan to raise prices on more than 200 drugs.

Another of Trump's many broken campaign promises was to refrain from hiring any lobbyists. He ended up giving jobs to hundreds of lobbyists, including Grogan, who had spent over five years as the Head of Federal Affairs  at Gilead Sciences, the manufacturer of HIV-prevention drug Truvada, after two years at drugmaker Amgen. Grogan spent two years as associate director of health programs in Trump's Office of Management and Budget and became assistant to the president and director of the White House's Domestic Policy Council in 2019.

Acting Budget Director Mick Mulvaney brought on Grogan from Gilead, a company accused of price gouging for hepatitis C drug Sovaldi. More recently, it has come under scrutiny for price gouging for Truvada, charging American consumers $1,600 to $2,000 per month for a drug that costs just a few dollars per month overseas.

Grogan had lobbied for Gilead on drug discounts, reimbursements, cost-sharing, and other financial matters right up through the first quarter of 2017. Nonetheless, Grogan was assigned a leading role in advising the administration on drug pricing. In 2018, he developed a reimbursement policy for an expensive cancer therapy while Gilead was trying to produce that very therapy, prompting an ethics probe by House Democrats.

Grogan and Health and Human Services Secretary Alex Azar, a former pharmaceutical executive who raised drug prices while at Eli Lilly, are supporting a modest, bipartisan Senate bill from Sens. Chuck Grassley (R-IA) and Ron Wyden (D-OR) that does not allow the government to negotiate prices with drugmakers. Pharma companies appear open to at least one component of the Grassley-Wyden bill that caps out-of-pocket expenses for people who have Medicare Part D drug benefits.

Senate Majority Leader Mitch McConnell (R-KY), always on the side of big business, is not interested in the bill and has not brought it up in his chamber. That surely pleases PhRMA, which strongly opposes the bill.

Last summer, Grogan said that, "The president will not be outflanked on the left on drug prices." Accordingly, Grogan is a no on Pelosi's pricing bill, opposing government negotiation on drug prices. "Nancy Pelosi's bill right now is unworkable, it’s impractical, and it's hyperpartisan and it is not going to pass in its current form," Grogan said in November.

Grogan sees political fallout from doing nothing about drug prices but appears to want to limit the scope of the pricing restraints. Given McConnell's stance tight ties with pharma, however, Congress is unlikely to pass anything to lower drug prices this year.

McConnell has been the top recipient of campaign contributions from the PACs and employees of pharmaceutical and health products companies. According to the Center for Responsive Politics, the industry has already given nearly $250,000 to McConnel's campaign in the 2020 election cycle. McConnell has received $2,500 from the Gilead Sciences PAC this cycle. From 2015 to the present, McConnell's campaign and leadership PAC have received $31,000 from the Eli Lilly PAC, $28,500 from the Amgen PAC, and $26,000 from Pfizer's PAC.

McConnell's individual donors include a number of pharmaceutical executives.

Through lobbying and by funding outside political spending groups, Grogan's former employer Gilead has directly and indirectly aided the campaign to sink Pelosi's legislation.

Gilead is a member of PhRMA, the most powerful drug lobbying group in the country, and Gilead chairman and CEO Dan O'Day serves on its board of directors. The company is also a member of the Biotechnology Innovation Organization (BIO), another prominent pharmaceutical trade association. On BIO's executive committee and Health Section Governing Board, which is considered part of the full board of directors, is Christi L. Shaw, the CEO of Kite, a Gilead company. BIO's president reportedly met with Grogan and Azar, likely numerous times, in 2019.

PhRMA is one of the biggest spenders on anti-drug pricing ads. Since May 2018, the trade group has spent a total of $5.3 million on Facebook and Twitter "issue ads," many of which oppose a drug pricing index and negotiations with drug companies, blame insurance companies and hospitals for high drug prices, or claim that Pelosi's bill would devastate the development of new medications. 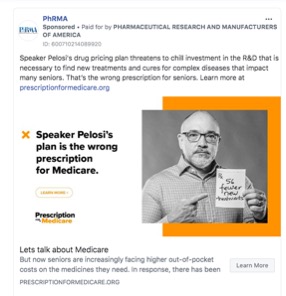 PhRMA is a major donor to another outside group, the GOP-tied American Action Network, which spent millions in 2019 promoting the pharmaceutical industry's preferences, including opposition to government price negotiations on Medicare drug costs, something that's currently prohibited. Ninety-two percent of Americans, including 85 percent of Republicans, want the government to negotiate Medicare drug prices. Still, the American Action Network has been claiming that such cost reductions would lead to "reduced access to life-saving medications" and "prescription drug rationing" while putting "bureaucrats in charge of seniors' ability to receive new treatments."

PhRMA has heavily funded these kinds of efforts, having donated $16 million to the American Action Network from 2011 to 2018, including $2.5 million in 2018.

Another recipient of PhRMA's generosity is the American Conservative Union, which, through its Coalition Against Socialized Medicine, has spent seven figures on ads attacking Pelosi's pricing bill. PhRMA gave the coalition $150,000 in 2017. Members of the coalition include nine PhRMA-funded groups, such as Citizens Against Government Waste, American Commitment, and Americans for a Balanced Budget.

The American Conservative Union recently lobbied Congress, Health and Human Services, and the executive office of the president on Pelosi's bill.

The U.S. Chamber of Commerce, which has pharmaceutical executives from Bayer, Celgene, and Pfizer on its board, has run online ads against H.R. 3, targeting members of Congress who voted for it. It previously campaigned against Trump's proposed international price caps on Medicare drugs. Gilead appears to be a chamber member, having given money last year to its African Business Center, Egypt Business Council, and Pakistan Business Council.

Additional industry astroturf groups are part of the anti-drug pricing influence campaign. Americans for Tax Reform ran ads last year against Trump's proposed international pricing index for drugs under Medicare. The Alliance for Patient Access, which has received funds from BIO and PhRMA in the past, has advertised in opposition to Medicare drug pricing reforms, and Patients Rising, which got $25,000 from PhRMA in 2016, is reportedly promoting the same agenda.

As outside groups put their corporate messages on the airwaves, pharmaceutical companies are lobbying at a furious pace. As of Sep. 30, 2019, drugmakers had spent $129 million on federal lobbying, far more than any other industry.

Gilead has deployed its in-house lobbyists and a number of lobbying firms to advance its drug-pricing interests before Congress, Health and Human Services, the Centers For Medicare and Medicaid Services, and other agencies.