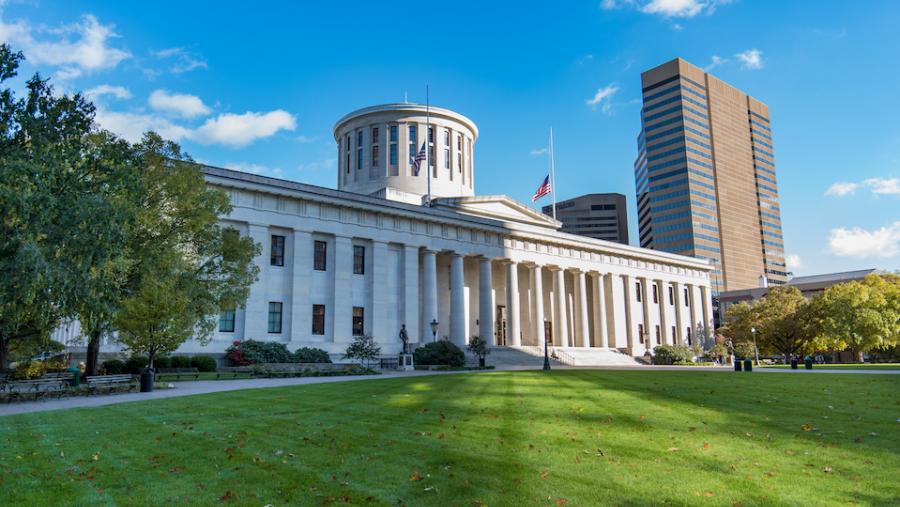 When anti-protest legislation pushed by oil, gas, and utility interests was introduced in the Ohio state Senate this year, it met a receptive audience and passed easily on a mostly party-line vote. It has since moved to the state House, where almost one-third of legislators are ALEC members, and will likely pass at the beginning of 2020.

The legislation, SB 33, is modeled after an ALEC proposal, and its corporate backers are big contributors to the Republican party and legislators in Ohio.

ALEC is the corporate bill mill where state legislators and corporations meet behind closed doors to write and advocate for legislation on the environment, criminal justice, health care, and most of the other domestic issues that affect us.

The bill, the "Critical Infrastructure Protection Act," being pushed by ALEC around the country makes it a felony for protestors to trespass on energy company property, such as pipelines, refineries, and power plants.

Prompted by the well-publicized stand-off at the Dakota Access crude oil pipeline in 2016, the industry's full-court press is working. Ten states, using ALEC's template bill, have enacted increased criminal penalties through legislation very much like SB 33.

The Center for Media and Democracy (CMD) has extensively reported on the controversy surrounding this type of legislation, including an article last month on Wisconsin's bill, signed by the new Democratic Governor, Tony Evers.

According to the legislature's Office of Research and Drafting, the Ohio bill "adds a new prohibition under the offense of 'criminal trespass' that expressly prohibits a person, without privilege to do so, from knowingly entering or remaining on a 'critical infrastructure facility.'"

While the offense for an individual protester is a misdemeanor - or a third-degree felony for destroying or tampering with "critical infrastructure" property - the bill would hit any organization found to be "complicit" in the violation with a fine ten times the maximum allowable fine for the protester.

Roxanne Groff, a former county commissioner in Ohio and spokesperson for the Buckeye Environmental Network, testified before the Ohio Senate Judiciary Committee that,

This bill was created to impose fear upon citizens who have become increasingly aware and vocal about the threats to their health, and their wellbeing as a result of the oil and gas industries’ assault on the land and people of this state by extraction of oil and gas, injection of toxic radioactive waste from this extraction and the infrastructure build outs of pipelines and gas compressor stations....

ALEC's Grip on the Ohio Legislature

In the Senate Judiciary Committee, where the anti-protest bill was heard, four of the 10 Senators - including the chair, John Ecklund (R) - are ALEC members.

But ALEC's influence over the bill's prospects doesn't stop there.

SB 33, which passed the Ohio Senate 24-8 in May, was introduced by ALEC member Frank Hoagland (R), chair of the state Senate Agriculture and Natural Resources Committee, and all 18 ALEC members in the Senate voted for it.

Indeed, the scope of ALEC's influence in the Ohio Legislature is profound.

Eleven of the 13 state Senate committees are chaired by ALEC members.

The bill is now pending in the House Public Utilities Committee, where the vice-chair and another five of the committee's 14 GOP members are ALEC members.

When the bill gets voted out of committee in the 2020 legislative session, it will be welcomed by two of the four top House leaders who are also ALEC members - Speaker Pro Tempore, Jim Butler, and the Majority Leader, Bill Seitz, who sits on ALEC's board.

Indeed, 23 of 61 of the Ohio state House members belong to ALEC.

Altogether, 41 of the state's 85 GOP legislative members and five of the top eight Republican House and Senate leaders are ALEC members.

Rob Eshenbaugh, a lobbyist with Capitol Advocates in Columbus, led the charge on the anti-protest bill in committee on behalf of a long list of fossil fuel, utility, chemical, transportation, and water corporations and trade associations.

Eshenbaugh was previously a lobbyist for the American Petroleum Institute, and his lobbying firm represents two other ALEC corporate backers, Caterpillar, Inc. and PhRMA, the drug industry's trade association.

A CMD analysis of Ohio's campaign finance records shows that Marathon Petroleum has donated $24,000 to Senate President Obhoff since 2010. It also gave $25,000 to Republican party committees. Duke Energy has paid almost $10,000 for GOP golf outings and has donated $28,000 to Senate Majority Leader Huffman during his career. Utility giant Exelon, another ALEC member, has given GOP party committees $12,500 since 2010.

For a more detailed analysis of SB 33, please visit PolluterWatch.