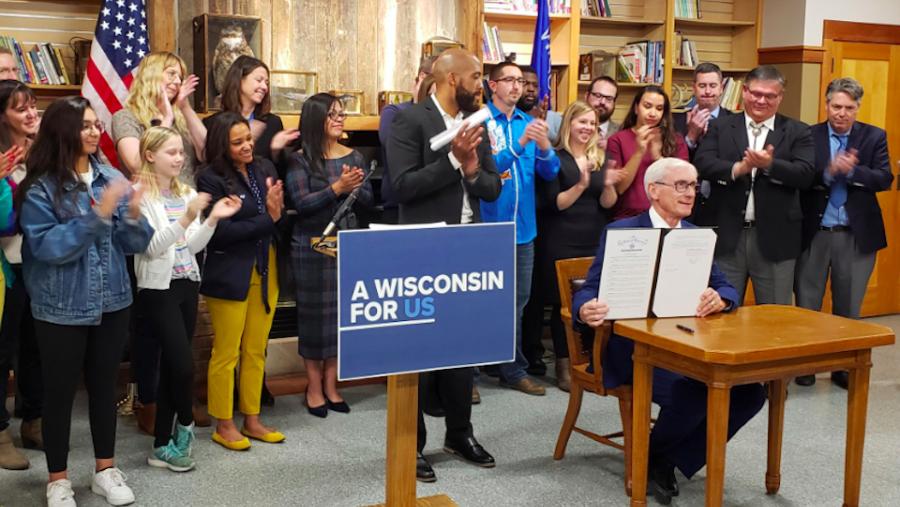 Wisconsin Governor Tony Evers (D) signed a bill into law Wednesday designed to criminalize and chill environmental protests, despite widespread opposition from local and national environmental and social justice groups, as well as some of Wisconsin's federally recognized tribes.

In a press release, the Governor echoed oil and gas industry talking points, which the Center for Media and Democracy (CMD) revealed earlier, saying, "Today, I signed Assembly Bill 426, which aims to ensure each energy provider is treated the same under the law while still protecting the right to exercise free speech and the right to assembly."

The law, now 2019 Wisconsin Act 33, echoes similar "critical infrastructure protection" model bills pushed out by the American Legislative Exchange Council (ALEC) and the Council of State Governments over the last two years to prevent future protests like the one against the Dakota Access Pipeline. Wisconsin is the tenth state to pass such a bill.

Under the new law, peaceful protestors can now be charged with a felony punishable by up to six years in prison and a $10,000 fine if they trespass on property owned, leased, or operated by companies engaged in the distribution of oil or petroleum.

In apparent recognition of Tribal Nation opposition to the bill, including the Ho Chunk Nation, the Bad River Band of Lake Superior Chippewas, and the Menikanaehkem, Evers continued, "while I am signing this bill today, I expect that moving forward members of the Legislature will engage in meaningful dialogue and consultation with Wisconsin's Tribal Nations before developing and advancing policies that directly or indirectly affect our Tribal Nations and indigenous persons in Wisconsin."

Few Senators addressed concerns of the Tribal Nations during public hearings and a floor amendment to narrow the conditions under which protestors could be charged with a felony failed. "Neither the energy industry nor the state of Wisconsin has consulted any tribal government about how this legislation would infringe on the sovereignty of Wisconsin’s twelve Indian Nations," said Maria Haskins of Menikanaehkem Inc.

On Tuesday, two letters urging the Governor to veto were delivered from large coalitions. Thirty-six groups in Wisconsin including the ACLU, the Sierra Club, the landowner group 80 Feet is Enough!, the Menikanaehkem, and others, pointed to a number of concerns, including that the bill violates constitutional rights, will result in more people of color imprisoned, and a loss of landowner rights.

Fourteen national groups including Defending Rights & Dissent, Greenpeace, the National Lawyers Guild, PEN America, and others expressed opposition and asked for a veto. "Special protections designed to protect the energy industry from protests, including nonviolent civil disobedience, do nothing to protect the public or worker safety. They do threaten our democracy by chilling dissent," the letter concluded.

"Governor Evers had the opportunity to demonstrate leadership on climate change, and he opted not to. The need to stand up for water protectors, Tribal members, and landowners with oil pipelines running through their property has been crystal clear with the recent pipeline fights in Wisconsin and around the country. It's disappointing that the governor was unwilling to do so and instead supported this bill that helps the fossil fuel industry continue to lock us into a climate catastrophe," Elizabeth Ward of Sierra Club-Wisconsin said.

"The ACLU of Wisconsin will closely monitor the enforcement of this law and oppose any attempts to infringe on the freedom of speech or criminalize people for making their voices heard," said Chris Ott, ACLU of Wisconsin executive director.

we vote for Democrats, to prevent right-wing policy...oh, wait.