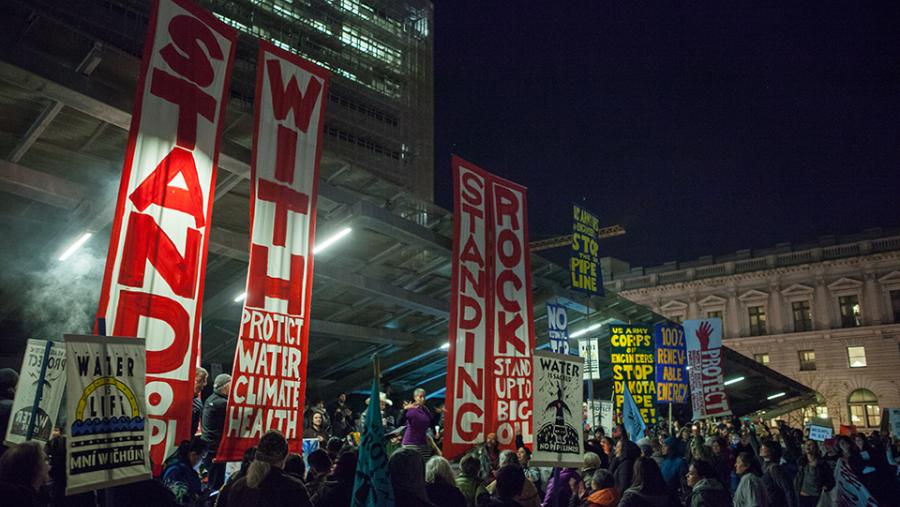 Lawmakers in Wisconsin introduced a bill on September 5 designed to chill protests around oil and gas pipelines and other energy infrastructure in the state by imposing harsh criminal penalties for trespassing on or damaging the property of a broad range of "energy providers."

Senate Bill 386 echoes similar "critical infrastructure protection" model bills pushed out by the American Legislative Exchange Council (ALEC) and the Council of State Governments over the last two years to prevent future protests like the one against the Dakota Access Pipeline.

The bill would expand a current law passed in 2015 that made it a felony to trespass on or damage property owned, operated, or leased by an electrical or gas company. Under the new bill, water, oil, petroleum, and renewable fuel companies' properties will be covered. Indeed, SB 386 goes even further than ALEC's bill by including all property held by the oil and gas industry in the state instead of a finite list of "critical infrastructure."

As a result, protesters -- and anyone helping to organize or fund them -- could find themselves facing jail time even for protests at an energy or water company's corporate headquarters.

If the penalty under current law remains, those found guilty would receive up to six years in prison, a maximum fine of $10,000, or both.

"The broad sweep of the bill would criminalize not only protests that take place near a pipeline, but protests on almost any property that is considered part of an oil or gas production or transportation 'system.' The potential prison sentences involved are bound to chill protected First Amendment conduct," said Elly Page, legal advisor at the International Center for Nonprofit Law.

The bill's lead sponsors, Rep. David Steffen (R-Green Bay) and Sen. Van Wanggaard (R-Racine), sent a "Co-Sponsor Memorandum" to all legislators dated June 5, 2019 stating that current law "inadvertently" does not cover "the energy infrastructure provided by water utilities, oil, petroleum, and renewable fuel industries," and SB 386 would correct this, the Center for Media and Democracy (CMD) has learned.

But the impetus for the bill appears to come from the American Petroleum Institute (API), the largest trade association for the oil and gas industry. Emails obtained by CMD show that Marcus Bentley, President of Bentley Government Affairs (BGA), has been heavily involved in the drafting of and lobbying for SB 386. Bentley has been authorized to represent just two principals for the current legislative session: API and MGI Leasing.

Mike and I were recently talking and we have not heard much recently regarding the critical infrastructure bill. Have your [sic] heard anything further? Is there someone in the Senate moving the bill?

Thanks and hope all is well.

Bentley responds within the hour, "Hi Garrett: Still in drafting."

Then, on August 12, Huffman emails Bentley again asking, "How are you [sic] efforts going to recruit Dem co-sponsors? Had any luck recently?" Bentley responds, "Yes...picking up Dems for the bill..[sic] should know more after the 19th conference call..[sic] with labor."

One of the Democrats Bentley got to co-sponsor was Sen. Janet Bewley (Mason) who met with him on June 13 to discuss "potential infrastructure legislation." The other Democrats currently listed as co-sponsors are Sen. Patty Schachtner (Somerset), Rep. Jason Fields (Milwaukee), Rep. Don Vruwink (Milton), and Rep. Christine Sinicki (Milwaukee).

The AFL-CIO and other backers said the law would protect "the health and safety of protestors, employees, and communities." The Illinois bill, which ultimately failed, also provided exemptions for picketing and organizing to aid in the attracting of unions like SB 386.

In Wisconsin, the trade unions and other supporters of the bill sent a memo dated July 29 to state lawmakers asking for their support of "The Worker Safety and Energy Security Act."

"Workers -- usually skilled, union tradesmen and tradeswomen -- are increasingly feeling unsafe and are seeing their equipment and even their own personal property being damaged. Attempts to improperly turn off or sabotage critical infrastructure is also putting our communities and environment at risk, and, in some cases, putting the lives of those doing the vandalism in jeopardy."

The memo also claims that First Amendment rights will be protected, including organizing, protesting, and picketing, but the sweeping definitions used in the bill will create uncertainty as to which locations are safe for protest, and will instill fear of criminal penalties and chill protected speech.

The memo closes stating that the "bipartisan" bill is a "commonsense proposal" that "has support from labor, agriculture and business."

"It is alarming to see the fossil fuel industry trying to pit environmentalists and labor unions against one another, a tactic which failed in Illinois. Science and basic human rights make clear that we must embrace a just transition to a 100% clean energy economy, with workers' rights at its center," said Maggie Ellinger-Locke, staff attorney at Greenpeace.

Nine states have passed so-called Critical Infrastructure Protection laws, starting with Oklahoma in 2017, which the ALEC bill was modeled after, according to Polluter Watch. This is despite the fact that vandalism and trespassing are already illegal in these states.

The law does have an exception included that states: b) An exercise of a person's right of free speech or assembly that is otherwise 7lawful. Am I missing something?
I was arrested along with over 200 other Wisconsin citizens for exercising our first amendment rights in the Wisconsin State Capitol. Despite the fact that all or our case were thrown out of court because the arrests were unconstitutional people the arrests themselves had consequences. People who put themselves on the line standing up for our right of free speech had pain compliance utilized on them as we were arrested. We had a 70 year old decorated Vietnam veteran dropped down the steps by the police. His hands were cuffed behind him taking away his ability to protect himself from the fall. This is only one example of the damage done to citizens under existing law. These new laws will just allow more harassing and physical abuse of citizens at the hands of police. These additional laws will have a chilling effect on free speech. They're unnecessary in a democratic society. They are ALEC bills designed to silence citizens standing up against the fossil fuels industries.