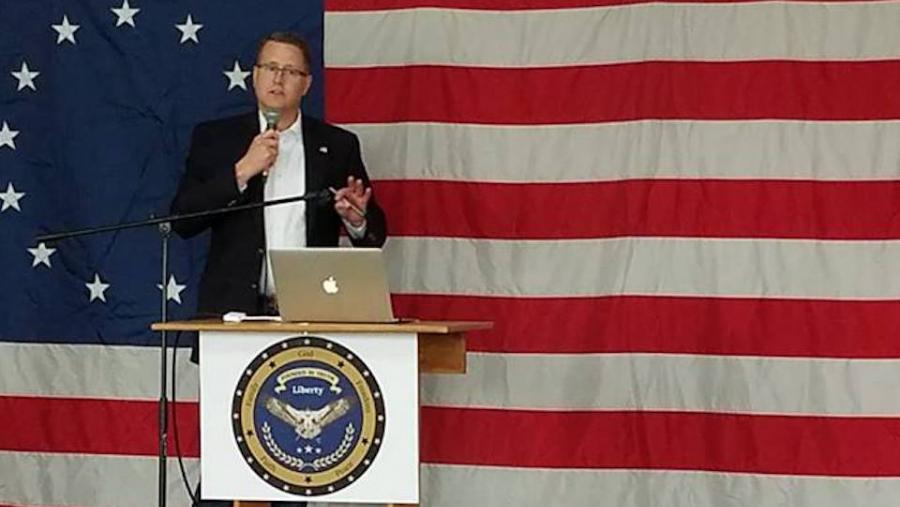 It has been a banner week for extremist politicians linked to the American Legislative Exchange Council (ALEC).

ALEC's Washington State Chair, Rep. Matt Shea, promoted and maintained close ties to an extremist group training children and young men for battle in a "Biblical warfare" while schooling them in the "biblical teachings" of racist preacher John Weaver, according to a new exposé published by The Guardian. The revelations come just weeks after the Washington House hired an outside firm to investigate whether Shea has engaged in, planned, or promoted political violence.

And ALEC alumni and Iowa congressman Steve King pondered Wednesday whether there would "be any population of the world left" without rape and incest. Rep. King was stripped of his committee posts in Congress earlier this year after questioning why white supremacy should be considered offensive.

Despite ALEC's claim that it "does not condone hate speech of any kind," the pay-to-play influence group has ignored calls for it to remove Shea from his ALEC leadership position, and has done nothing to repudiate the extremist statements of Shea, King, or other radical right-wing ALEC legislators.

ALEC does not disclose how its "State Chairs" are selected, but according to its 46th annual meeting agenda, they serve as leaders to their state's delegation, receive special training, and are invited to exclusive events. Rep. Shea (R-Spokane) has been listed as an ALEC State Chair since July 29, 2017.

In November of 2018, The Seattle Times reported that Spokane County Sheriff Ozzie Knezovich had referred Shea to the Federal Bureau of Investigation for circulating a manifesto advocating a U.S. holy war that Knezovich described as a "'how to' manual consistent with the ideology and operating philosophy of the Christian Identity/Aryan Nations movement and the Redoubt movement of the 1990s."

Shea's "Biblical Basis for War" calls for the killing of all males who do not agree to "obey" biblical law. The radical agenda Shea circulated included a stop to all abortions, an end to same sex marriage, an end to idolatry, an end to communism, and replacing America's current justice system with Biblical law.

As a result, Shea lost his leadership role within the Washington state Republican Caucus, and many donors cut ties with him. ALEC, however, kept him in his position as State Chair.

In addition to the "Biblical Basis for War," The Guardian reported in April of 2019 that Shea had engaged in conversations about "carrying out surveillance, 'psyops' and even violent attacks against his perceived political enemies."

Shea also authored legislation to create "a separate and independent state" in "the eastern portion of Washington" called "Liberty." A presentation Shea gave titled "Protecting our Christian Culture and Heritage" is displayed as justification for the new state, in which he calls Christianity the United States' religion.

According to Dave Neiwert, author of the book "Alt-America: The Rise of the Radical Right in Trump's America," there has been a dedicated effort to try to get white supremacists to move to the Northwest to create an all-white ethnostate there. The demographics of the proposed State of Liberty would have significantly less racial diversity than the rest of the state.

When the Corvallis Advocate reported that Oregon Rep. Mike Nearman was listed as the vice president of Oregonians for Immigration Control (OFIC), he denied it. OFIC has been described by the Southern Poverty Law Center (SPLC) and local news organizations as a hate group that "has links to influential white nationalist eugenicist John Tanton." The Daily Beast later confirmed that Nearman was "very definitely" the vice president of the organization "some time after early March 2017."

An ALEC member, Nearman was selected as the "ALEC-FreedomWorks Legislator of the Week" in July of 2017.

Nearman may not work for OFIC any longer, but he still participates in the group's events, including an OFIC lunch on March 26, 2019. Nearman now has a position as "the state director of the anti-union Freedom Foundation," according to the Salem Reporter. The Freedom Foundation is an affiliate of ALEC's sister organization, the State Policy Network, a right-wing web of "think tanks" in 49 states that is often called upon to provide the academic legitimacy for ALEC model bills as they are introduced.

Former Arizona representative and ALEC member David Stringer stirred controversy last year when he gave a speech complaining that "there aren't enough white kids to go around" to integrate Arizona's schools and that immigration is an "existential threat" to Arizona.

Josselyn Berry, of ProgressNow Arizona, said that Stringer's comments were "racist and paranoid" as well as "fear mongering and hateful." Furthermore, a local news outlet reported that Stringer "had a hard time apologizing and providing a 'yes or no' answer about whether he is a white nationalist." According to Arizona House Minority Leader Rebecca Rios, Stringer's rhetoric "echoes fervent racists and white nationalists like David Duke."

The Arizona Republican Party Chairman at the time, Jonathan Lines, and ALEC-tied Gov. Doug Ducey both called for Stringer to resign in response to his statements, but ALEC made no comment.

In November 2018, Stringer was back at it, telling a group of university students that, unlike European immigrants, "African-Americans and other racial groups don't ... blend in." That prompted the Arizona Anti-Defamation League to question Stringer's fitness for office, and the incoming Minority Whip, Reginald Bolding, said censure and removal should be on the table.

Stringer was ultimately forced to resign from office by Republican leaders in March 2019 after his undisclosed 1983 conviction for child sex abuse came to light.

ALEC has not spoken out on the controversy.

In 2017, Keller spoke on a "white power advocate's" radio show. Her appearance can be found on the 'Resolution Radio' website, where images for the show state, "Our white culture is beautiful!" "'Diversity' is a code word for white genocide," and David Lane's infamous white supremacist slogan, "We must secure the existence of our race and a future for white children. Because the beauty of the Aryan women must not perish from the earth."

Keller paid ALEC for a two-year legislative membership in 2017.

When the Center for Media and Democracy (CMD) and a broad coalition of 78 organizations urged ALEC's corporate funders to cut ties with the bill mill following inflammatory comments by hatemonger David Horowitz at last year's Annual Meeting, ALEC took steps to distance itself from his radical views. ALEC stated that it does "not share the perspective" Horowitz expressed at its 45th annual meeting, despite the fact that Horowitz received a glowing introduction and called ALEC's CEO Lisa Nelson "my old friend." Among other things, Horowitz proclaimed that public education "had been turned over to racist organizations like Black Lives Matter and terrorist organizations like the Muslim Brotherhood."

Nonetheless, ALEC has remained conspicuously silent about the dangerous and racist statements and ties of its legislative leaders and members Shea, King, Nearman, Stringer, and Keller.