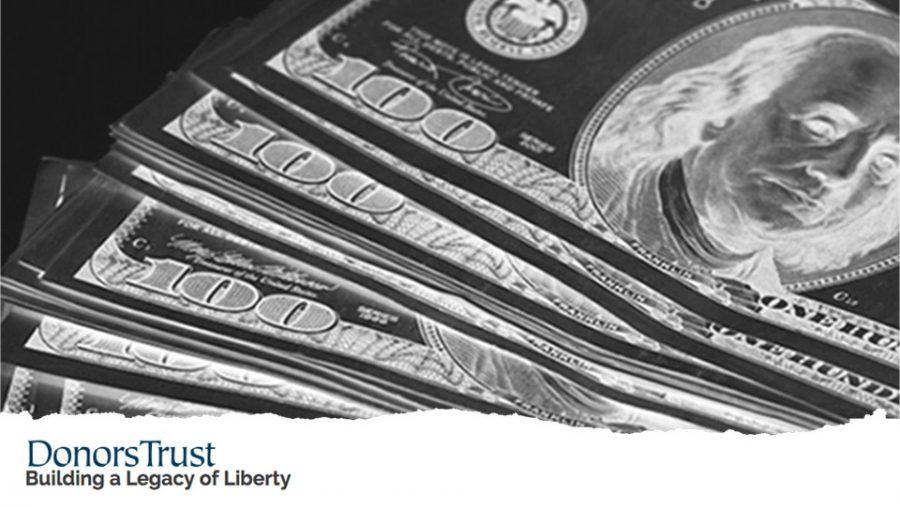 The Koch network's favorite piggy bank DonorsTrust and its sister organization Donors Capital Fund doled out $114.2 million in grants in 2017, a decrease from the $142.6 million distributed by the two donor conduits in 2016.

IRS filings obtained by the Center for Media and Democracy (CMD) show that the drop in monetary awards can be explained, in part, by the significant decrease in contributions to Donors Capital Fund, which saw its overall revenue drop from $71.4 million in 2016 to $1.8 million in 2017.

The largest contribution to DonorsTrust in 2017 came from one individual to the tune of $63 million, $54 million more than the next largest donor.

The largest amount of DonorsTrust cash in 2017 was funneled to right-wing legal advocacy groups involved in the campaign to get Associate Justice of the Supreme Court Neil Gorsuch confirmed.

When the GOP rammed through the nomination of Neil Gorsuch to the U.S. Supreme Court after an unprecedented blockade of President Obama's nominee, the airwaves and Internet were flooded with pro-Gorsuch ads. $10 million of that came from the nebulous dark money group, the Judicial Crisis Network (JCN).

Tax returns now show that the ATM for the Koch brothers' massive donor network, DonorsTrust, gave Judicial Education Project, a non-profit sister organization of JCN, $8.8 million or 93% of its total revenue for 2017. The money not only paid for "significant education and media efforts" to get Gorsuch confirmed, but also a large number of Supreme Court amicus briefs, including in Janus v. AFSCME and Gil v. Whitford.

The Center for Responsive Politics reported last year that Judicial Education Project paid $1.3 million to BH Group LLC, the group that gave $1 million to Trump's inauguration. BH Group was incorporated by Bruce Jacobi, CEO of Cogency Global and counts Leonard Leo as an employee. "The corporation is nearly untraceable beyond an address for a 'virtual office' in Arlington, Va.," McClatchy reported.

Leo is the executive vice president of the Federalist Society, a group that was also instrumental in getting Gorsuch a seat on the Supreme Court. He took a leave of absence from the Federalist Society to aid Trump in selecting Gorsuch. When Gorsuch was asked in a Senate questionnaire who first contacted him from the White House about the Supreme Court open seat, he responded, "I was contacted by Leonard Leo."

The Federalist Society received $5.5 million from DonorsTrust in 2017, which was more than 25% of its total revenue in that year.

Leo and the Federalist Society also played a primary role in the renaming of George Mason University's Antonin Scalia Law School in 2016, according to Transparent GMU. The school was named after the late Justice with a $10 million grant from the Charles Koch Foundation and $20 million from an anonymous donor who would contribute the money in installments once a year through 2020. DonorsTrust also gave over $4.5 million to the Scalia Law School through the GMU Foundation in 2017.

Neomi Rao, Trump's nominee to replace Supreme Court Associate Justice Brett Kavanaugh on the D.C. Circuit Court, was a professor at the Scalia Law School before becoming administrator of the Office of Information and Regulatory Affairs at the Office of Management and Budget in 2017.

Trump's acting Attorney General Matthew Whitaker was paid entirely from DonorsTrust in 2015, 2016, and 2017 when he worked for the Foundation for Accountability and Civic Trust (FACT), the Center for Responsive Politics reported. FACT's work during that period focused primarily on attacking Hillary Clinton over her email scandal, filing complaints against Democratic politicians, and lobbying against the confirmation of President Obama's nominee, Merrick Garland, to fill the Supreme Court vacancy left by Justice Scalia's death.

DonorsTrust has also provided millions to support the right-wing agenda and lobbying efforts of the Koch-funded American Legislative Exchange Council (ALEC) and its sister organization, the State Policy Network (SPN).

DonorsTrust gave $422,000 to ALEC in 2017, up from $315,000 in 2016. ALEC is a pay-to-play operation where legislators and corporate lobbyists meet behind closed doors to adopt model legislation on issues that affect our lives, such as the environment, energy policy, and workers' issues. Common Cause and CMD have filed IRS complaints against ALEC, charging the organization with tax fraud for illegally operating as a corporate lobbying group while registered as a nonprofit charity.

DonorsTrust and Donors Capital Fund gave close to $5.8 million directly to SPN in 2017. SPN is the right-wing web of "think tanks" and tax-exempt organizations in 49 states that is often called on to provide academic legitimacy to ALEC legislation.

SPN and its members were very active in the fight to "defund and defang" public sector unions in 2017, with many of its members providing legal support in the form of attorneys or amicus briefs to Mark Janus in Janus v. AFSCME. Janus won his case in the Supreme Court in June 2018. As a result, unions can no longer require its members to pay "fair share" fees to cover the cost of bargaining for better wages, benefits, and working conditions.

DonorsTrust and Donors Capital Fund pumped $4.4 million into groups that submitted amici briefs and supplied legal assistance in the Janus case in 2017 alone. 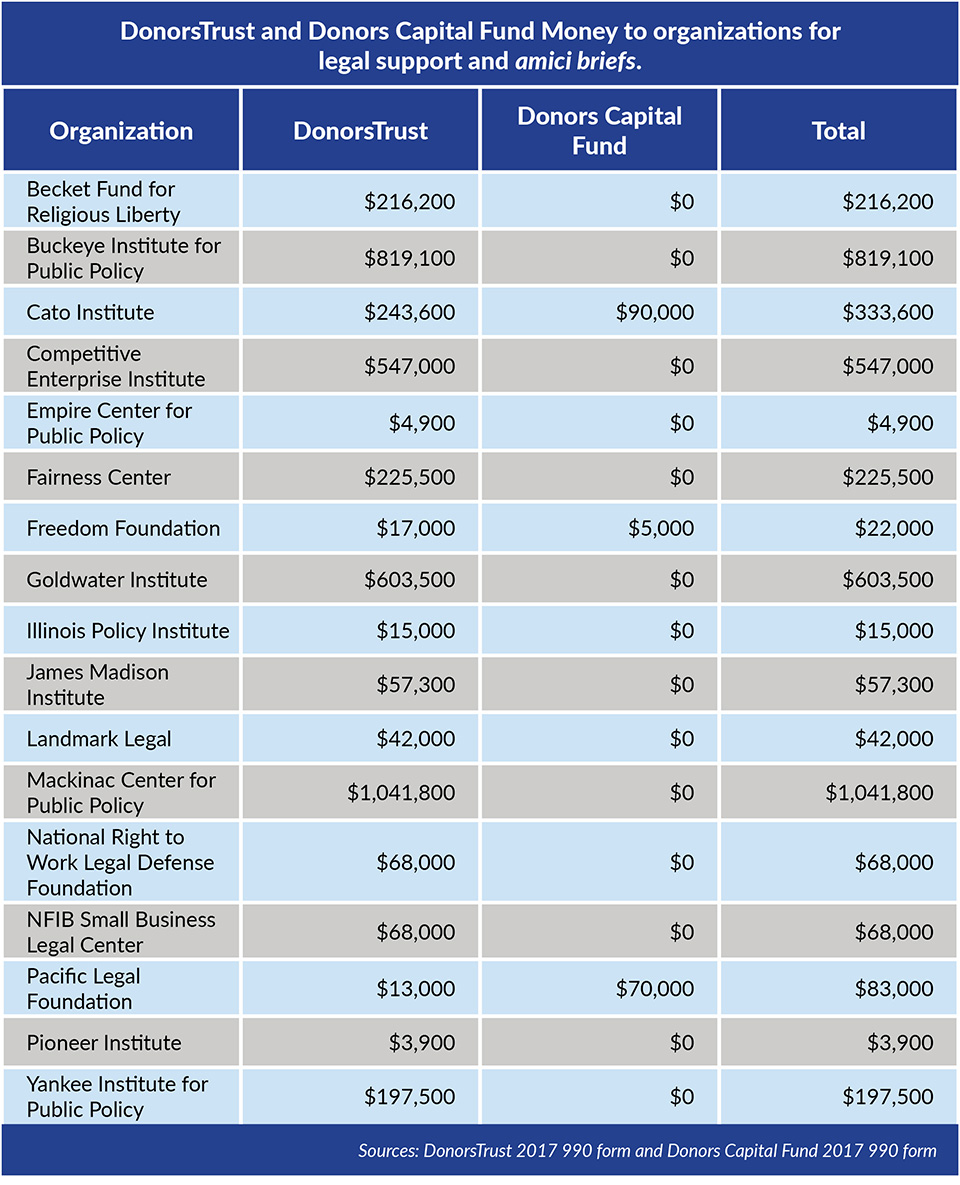 Other groups in the Koch's influence network benefited from DonorsTrust grants in 2017.

Americans for Prosperity Foundation -- reorganized in late 2016 to encompass the Koch front groups Libre Initiative, Concerned Veterans for America, and Generation Opportunity -- received $958,700 in 2017, $125,000 of which was designated for "Wisconsin AFPF Issue Education."

Stand Together, the Koch's "venture philanthropy" outfit, received another $100,000 and The Seminar Network Trust received $100,000, $50,000 to AFP-Arizona and $50,000 for a "Steve Perry Project." Steve Perry is the controversial charter school promoter and founder of Capital Preparatory Schools, which received over a million from Charles Koch in 2017.

DonorsTrust again provided media attack dog James O'Keefe and his Project Veritas "media" outfit with ample resources for his controversial "investigations." Over $2.4 million was funneled through DonorsTrust to O'Keefe's team in 2017, a $700,000 increase from 2016.

Project Veritas attempted to save Alabama Senate candidate Roy Moore's campaign that year by trying to entrap the Washington Post into reporting a fake story about a woman claiming to have been impregnated by Moore, but failed. Project Veritas also stole documents from American Federation of Teachers-Michigan in a "sting" in the summer of 2017.

DonorsTrust provided the hatemonger and anti-Muslim David Horowitz $127,600 for his Freedom Center in 2017. Since the late 1980s, Horowitz has been a "driving force of the anti-Muslim, anti-immigrant and anti-black movements," according to the Southern Poverty Law Center (SPLC).

Horowitz gave a hate-filled speech at ALEC's meeting last year that resulted in Verizon and AT&T exiting the group.

The so-called "Alliance Defending Freedom" also received $2,000 through DonorsTrust. The Human Rights Campaign calls the organization, "An enthusiastic leader in defending the unconscionable 'right' to discriminate against LGBT people, they are also a world-wide exporter of their own brand of hate."

Notably, DonorsTrust continues to fund the activities of Talent Market, the right-wing's head hunting agency with close ties to the Koch network, the State Policy Network, and the Bradley Foundation. Talent Market, an LLC owned by DonorsTrust, had over $250,000 in expenses in 2017, $150,000 of which went to Claire Kittle-Dixon who serves as the Executive Director.

DonorsTrust was established in 1999 by long time libertarian activist Whitney Ball to allow right-wing millionaires, billionaires, and foundations to funnel money anonymously to network partners, including after their death. Lawson Bader, president and CEO of DonorsTrust, once explained, "There are clients of ours that may love their kids, but perhaps the client and the kids differ in terms of political philosophy, or institutional support." DonorsTrust ensures that the money is not redirected by surviving family members in such a case.

Scott Zimmerman helped with research for this report.