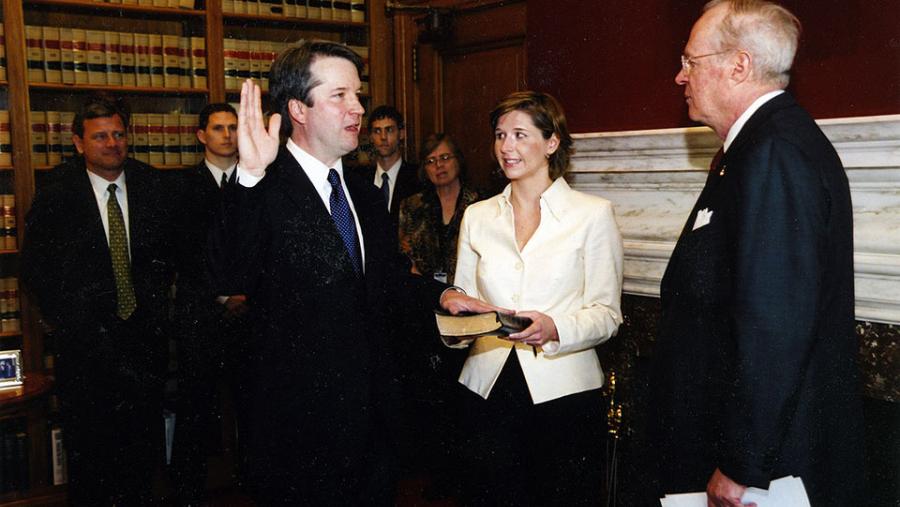 Much of Washington has spent the week focusing on whether Judge Brett Kavanaugh should be confirmed to the Supreme Court. After the revelations of his confirmation hearings, the better question is whether he should be impeached from the federal judiciary.

I do not raise that question lightly, but I am certain it must be raised.

Newly released emails show that while he was working to move through President George W. Bush's judicial nominees in the early 2000s, Kavanaugh received confidential memos, letters, and talking points of Democratic staffers stolen by GOP Senate aide Manuel Miranda. That includes research and talking points Miranda stole from the Senate server after I had written them for the Senate Judiciary Committee as the chief counsel for nominations for the minority.

Receiving those memos and letters alone is not an impeachable offense.

No, Kavanaugh should be removed because he was repeatedly asked under oath as part of his 2004 and 2006 confirmation hearings for his position on the U.S. Court of Appeals for the D.C. Circuit about whether he had received such information from Miranda, and each time he falsely denied it.

For example, in 2004, Sen. Orrin Hatch asked him directly if he received "any documents that appeared to you to have been drafted or prepared by Democratic staff members of the Senate Judiciary Committee." Kavanaugh responded, unequivocally, "No."

Back then the senators did not have the emails that they have now, showing that Miranda sent Kavanaugh numerous documents containing what was plainly research by Democrats. Some of those emails went so far as to warn Kavanaugh not to distribute the Democratic talking points he was being given. If these were documents shared from the Democratic side of the aisle as part of normal business, as Kavanaugh claimed to have believed in his most recent testimony, why would they be labeled "not [for] distribution"? And why would we share our precise strategy to fight controversial Republican nominations with the Republicans we were fighting?

Another email chain included the subject line "spying." It's hard to imagine a more definitive clue than that. Another said "Senator Leahy's staff has distributed a confidential letter to Dem Counsel" and then described for Kavanaugh that precise confidential information we had gathered about a nominee Kavanaugh was boosting. Again, it is illogical to think that we would have just given Miranda this "confidential" information for him to use against us. But this is precisely what Judge Kavanaugh suggested in his testimony on Wednesday. He is not that naïve.

As of November 2003, when the sergeant-at-arms seized the Judiciary Committee's servers, Kavanaugh would have been on notice that any of the letters, talking points, or research described as being from Democrats that were provided to him by Miranda were suspect and probably stolen from the Senate's server.

But he did nothing. He did not come forward to the Senate to provide information about the confidential documents Miranda had given him, which were clearly from the Democrats.

Kavanaugh also apparently did nothing when the Senate referred the case to the U.S. attorney's office for criminal prosecution. (Miranda was never prosecuted.)

Eventually, though, Kavanaugh went even further to help cover up the details of the theft.

During the hearings on his nomination to the D.C. Circuit a few months after the Miranda news broke, Kavanaugh actively hid his own involvement, lying to the Senate Judiciary Committee by stating unequivocally that he not only knew nothing of the episode, but also never even received any stolen material.

Even if Kavanaugh could claim that he didn't have any hint at the time he received the emails that these documents were of suspect provenance -- which I personally find implausible -- there is no reasonable way for him to assert honestly that he had no idea what they were after the revelation of the theft. Any reasonable person would have realized they had been stolen, and certainly someone as smart as Kavanaugh would have too.

Read the full article by Lisa Graves here. Read another on this topic by Jeremy Stahl here.