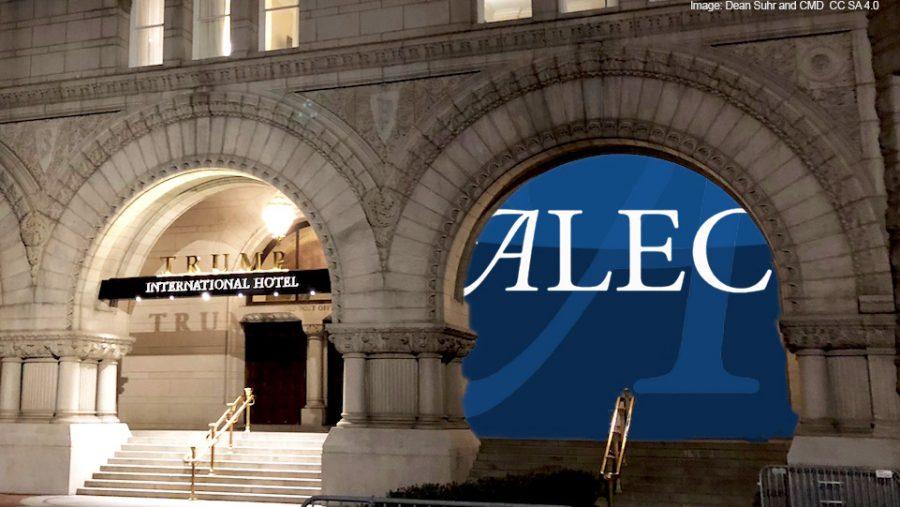 Invitations have gone out for the American Legislative Exchange Council (ALEC)'s 45th Gala on September 26, 2018 at the Trump International Hotel, just blocks from the White House in Washington, D.C., and the event chairs and committee members are a who's who of prominent Republicans, big polluters, lobbyists, and union busters.

The invitation to what will likely be the corporate bill-mill's largest fundraiser to date was obtained by Documented.

The Center for Media and Democracy (CMD) previously reported that individual tickets to the Gala cost $500, or state delegations can ask lobbyists to sponsor a table for $10,000.

While it masquerades as a charity, ALEC is actually a powerful corporate-funded pay-to-play group that brings lawmakers, lobbyists, and other right-wing groups together to vote side-by-side on bills that legislators then take back and introduce in their home states, usually without any public disclosure of their source. Common Cause filed an IRS whistleblower complaint against ALEC in 2012, charging the group with tax fraud and massively underreporting its lobbying activity. CMD has since teamed up with Common Cause on several supplements to the complaint, including one in 2016 exposing Exxon's illegal use of ALEC to promote its climate denial agenda.

Indeed, corporate lobbyists may outnumber politicians if the Gala Chairs and Committee list is any indication.

Lobbyists for big polluters, Michael Morgan from Koch Companies Public Sector and Ken Freeman from Exxon Mobil, are on the committee, although it is unclear if Freeman will now attend after Exxon dropped out of ALEC last month.

Big pharma's Ken Cole from Pfizer is a Gala Chair and Big tobacco's Dan Smith from Altria sits on the committee.

Grover Norquist, one of the chief architects of the movement to crush unions, is on the committee alongside Chirag Shaw of the Asian American Hotel Owners Association, a group that has fought minimum wage hikes in California.

The "Save the Date" also adds Matt Schlapp, chairman of the American Conservative Union to the event committee.

While ALEC's primary focus has been on state legislation for most of the last 45 years, it has become increasingly involved in federal issues of interest to its patrons, such as fighting net neutrality, and many ALEC alumni now serve in Congress and the executive branch. Vice President Mike Pence was a longtime active member of ALEC, and spoke at the group's 2016 annual meeting.

ALEC was quite chilly to candidate Donald Trump, but jumped to embrace him once elected. The group's executive director, Lisa Nelson, wrote in a giddy letter to funders and members after the 2016 election that the Trump administration had "the potential to be an ALEC administration. It is full of the people and ideas we have advanced since 1973.... Now is our time. And ALEC is ready."

A November 2017 report by Public Citizen found that 44 officials in Trump's government have close ties to the Koch brothers, prominent players and funders in ALEC. Koch Industries' director of governmental affairs, Michael Morgan, holds a seat on ALEC's corporate "advisory" board.

With ALEC hosting its 45th anniversary gala at the 45th president's premier influence center in the nation's capital, it would appear that ALEC's conversion to Trumpism is complete.

View the invitation and "Save the Date" below: