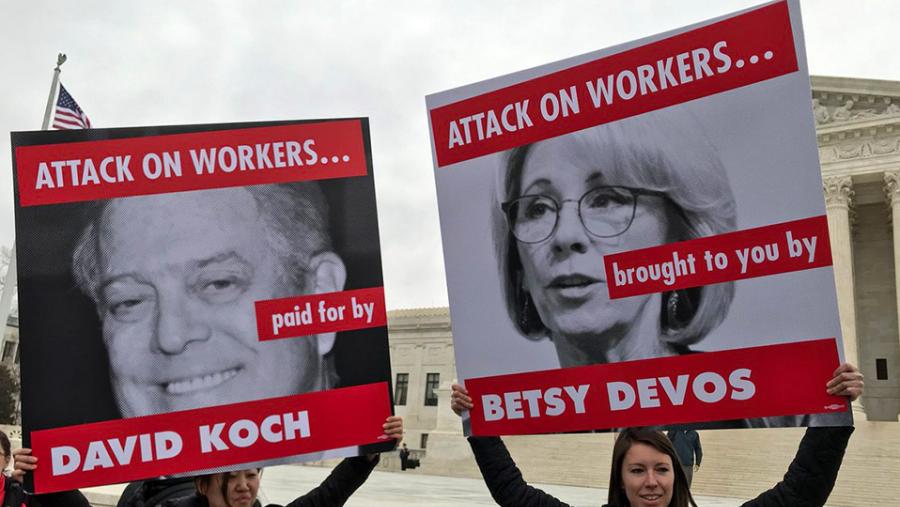 In a major blow to organized labor and good paying government jobs, the U.S. Supreme Court ruled today that government workers who choose not to join a union cannot be charged fees to reimburse the union for the cost of representing them in collective bargaining.

The decision was 5-4 in the Janus vs. AFSCME Council 31 case, with Trump appointee Neil Gorsuch supplying the deciding vote. Justice Samuel Alito, who actively invited a challenge to union fees, wrote the decision for the Court's right-wing majority.

In today's decision, Alito wrote that the fees, called "agency fees," violated the First Amendment. In doing so, Alito overruled a 41-year-old Supreme Court decision legalizing these fees in the Abood vs. Detroit Board of Education decision.

The decision ushers in "right to work" style conditions for public employees in states across the nation. These anti-union measures originated in the Jim Crow South as a means of undermining unions who were organizing black and white workers together in the same shop. Predictably, Koch brothers groups--such as Americans for Prosperity, the American Legislative Exchange Council (ALEC), and the State Policy Network--cheered the ruling, while union leaders prepared to renegotiate thousands of contracts and deal with a new legal landscape for unions across the land.

The case should be seen in the context of a sustained assault by extremist billionaires, corporations, and foundation on unions, the organized voice of working families and a major player in campaigns and elections on the Democratic side.

Over the past decade, as ALEC legislators aggressively advanced union-busting bills in red states like Wisconsin, Michigan, West Virginia and Kentucky, a slew of rapid fire cases were advanced by allied groups in blue states, as Center for Media and Democracy detailed in an award-winning article on the Janus case. A number of these cases, including Knox v. SEIU (2012), Harris v. Quinn (2014), and Friederichs v. California Teachers Association (2016), made it to the U.S. Supreme Court and were used by Justice Alito to justify the Janus decision.

The Janus case originated with Republican Governor Bruce Rauner of Illinois. The American Federation of State County and Municipal Workers (AFSCME) represents state workers in Illinois and campaigned hard against the venture-capitalist in his 2014 race for governor. When Rauner was found not to have standing, attorneys from the Illinois Policy Institute--a State Policy Network think tank--substituted Illinois child care worker Mark Janus as the lead plaintiff. Rauner said that "taking this issue on was one of my primary reasons for running for governor in the first place," and flew to Washington, DC this week to await the ruling.

The case involves the obscure technical issue of agency fees. In over 20 states, even if public sector workers do not want to be represented by a union, they must pay agency or "fair share fees" to cover the cost of their representation. These fees were ruled fair and constitutional in 1977 by the U.S. Supreme Court in the Abood decision, to prevent a "free rider" problem and because unions are legally required to represent all workers in a bargaining unit. The fees fund the unions' collective bargaining process and other services they provide to state workers; they cannot be used for political action.

Justice Alito wrote that the free rider problem was not a "compelling state interest."

Dissenting justices portrayed the case is a radical re-write of labor law, with dramatic consequences for dozens of states and thousands of binding contracts.

"There is no sugarcoating today's opinion. The majority overthrows a decision entrenched in this Nation's law--and in its economic life--for over 40 years," wrote Kagan, who read her dissent from the bench. In doing so the Court has "weaponized the First Amendment," she said.

The radical nature of the case was explained by Justice Kagan during oral arguments:

Twenty-three states, the District of Columbia, Puerto Rico, all would have their statutes declared unconstitutional at once. Thousands of municipalities would have contracts invalidated. Those contracts probably cover millions, maybe up to over 10 million, workers. So property and contract rights, the statutes of many states and the livelihoods of millions of individuals affected all at once. When have we ever done something like that? What would be the justification for doing something like that?

Kagan also wrote that in overturning Abood the Court "disregards the defining characteristic of this free-rider argument--that unions, unlike those many other private groups, must serve members and non-members alike…. That special feature was what justified Abood."

"But the worse part of today's opinion is where the majority subverts all known principles of stare decisis," the principle that rulings should be based on precedent, Kagan wrote. The majority can't just "throw some gratuitous criticisms into a couple of opinions and a few years later point to them as 'special justifications' for their actions," she said.

Randi Weingarten of the American Federation of Teachers had previously stressed this point. "Rarely is there a situation where a next-generation Supreme Court overrules or changes precedent of a unanimously decided opinion. This is a completely ideological movement to end unions as we know it and to redefine the First Amendment as a weapon against people," she said.

The decision, along with the recent EPIC Systems v. Lewis case, will make the Trump-Gorsuch court one of the worst for working families in history. Gorsuch wrote the May 2018 EPIC Systems decision, which held that businesses can prohibit their workers from banding together to battle their employers in court in disputes over a wide array of issues such as wage theft, sexual harassment, civil rights, and gender discrimination.

"This is probably the most relentlessly anti-democratic and specifically anti-worker court since the 'Lochner Era' of the late 19th and early 20th century," University of Wisconsin Law Professor Joel Rogers told the Center for Media and Democracy.

"But Janus shows it's arguably worse, since it doesn't even respect freedom of contract. This Court doesn't stand for the 'rule of law,' which means putting constraints on the arbitrary and abusive use of power. It's 'let's concoct a legal justification for giving abuse a free rein,'" said Rogers. The 1905 Lochner case held that limits on the work day or work week violated the Constitution.

"These are two devastating 5-4 decisions--two decisions that could have easily gone the other way but for the sabotage of the appointment of Merrick Garland," said Courtlyn Roser-Jones, visiting Assistant Professor at the Ohio State Mortiz College of Law. Garland was appointed by President Obama in 2016, but the Republican Senate refused to confirm him leading to Trump's appointment of Neil Gorsuch.

"We are living in a system that is rigged to benefit special interests and billionaires, all at the expense of working people. Today's radical decision by the Supreme Court is a blatant slap in the face for educators, nurses, firefighters, police officers and all public servants who make our communities strong and safe… [U]nions will continue to be the best vehicle on the path to the middle class," said Lily Eskelsen García, President of the National Education Association.

And the agenda is broader that just unions, the court is going after the policies that unions advocate for, say experts.

"This is a concerted, corporate-funded effort to get rid of public employee unions--to stop them from advocating for higher minimum wages, affordable healthcare or a right to paid sick leave, to stop them winning wages and benefits that force private sector employers to raise their own wages, and to stop them from insisting on a level of public services--schools, libraries, transportation and more--that we all have a right to just by dint of being citizens," said Gordon Lafer, a professor at the University of Oregon's Labor Education and Research Center.

Team Trump Is Building a Lasting Anti-Worker Legacy, but Unions Are Fighting Back

The Trump administration frequently claims to be on the side of the little guy, but it is building a strong track record of harming workers and working families in the courts, in Congress, and in administrative agencies.

The 2018 EPIC Systems ruling will harm millions of non-union workers who will be newly subject to arbitration. The huge tax cuts for the wealthy and corporations in the Tax Cuts and Jobs Act signed into law by Trump the end of 2017 will exacerbate an already profound income inequality gap between the wealthy and working families. And the Trump administration has aggressively rolled back a 2016 rule strengthening overtime protections for low- and middle-income workers, and took steps to gut regulations that protect restaurant workers from having their tips taken by their employers. Michael Arria noted in Salon that by "attacking overtime pay, Trump is hurting his biggest fans."

But unions are not sitting idly by. Massive teachers' strikes have succeeded in winning major concessions for government workers in multiple states. "Don't count us out," said AFT's Weingarten. "Workers are sticking with their unions, because they know that unions are the best vehicle for workers to get ahead."

Richard Trumka, the head of the national AFL-CIO, also noted the recent revival of organized labor. "All over the country, workers are organizing and taking collected action as we haven't seen in years. More than 14,000 workers recently formed or joined unions in just a single week. This followed a year where 262,000 workers organized and the approval of unions reached a new high."

"The corporate narrative of the labor movement's downfall is being dismantled by working people every single day," said Trumka.

Mary Bottari's February story detailing the money trail behind the Janus vs. AFSCME case won national recognition from the Sidney Hillman Foundation. You can read that story here.

Justice Kagan wrote a scathing dissension in which she highlighted the reversal of Abood. Only 50 years had passed, a very short time to toss aside Stare Decisis. Although my personal preferences lie with the decision it is a troubling one nevertheless. Unions still represent workers even in Right-to-Work states. Unions will continue to represent workers after Janus. Unions will just need to service the employee as I thought was true when I belonged to the teamsters many a year ago. My high school mates belonging to various trade unions echoed my sentiment. Union membership was worth it. Our dues did more than just negotiate wages.