U.S. Supreme Court Decision a "Roadmap" for a Ruling on Partisan Gerrymandering Case 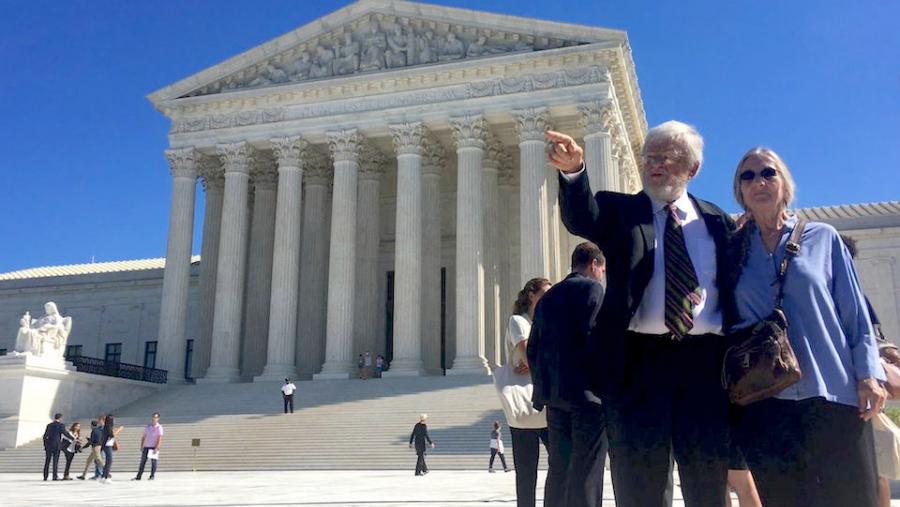 A unanimous U.S. Supreme Court handed down a decision in Gil vs. Whitford, a case challenging the extreme partisan gerrymandering of Wisconsin voting districts by the GOP legislature. The Court remanded the technical issue of "standing" back to the same three-judge panel that had ruled Wisconsin legislative districts unconstitutional. The Court did not rule on the merits, leaving the door open for a ruling that may still rein in computer-aided, hyper-partisan gerrymandering. Read the ruling here.

The ruling was described as a "punt" by some observers, but the lawyer representing disenfranchised Wisconsin voters is hopeful that the issue can be remedied and sent back to the court for a ruling on the merits. Advocates are hoping that Justice Anthony Kennedy, who has expressed concern about this type of gerrymandering may pave the way for a positive outcome.

Citing Kennedy, Justice Elena Kagan wrote in her concurrence that "partisan gerrymandering, as this Court has recognized, is 'incompatible with democratic principles'… the practice enables politicians to entrench themselves in power against the people's will."

Paul Smith of the Campaign Legal Center argued the case before the Court on October 3, 2017. He explained today's ruling at a press conference.

"The Court issued a unanimous decision saying that the plaintiffs did not yet prove they had standing to persue the gerrymandering claim… saying essentially that our theory of statewide vote dilution does not work under a standing law that does not produce a sufficiently 'concrete and particularized' injury for each of the plaintiffs," said Smith. The Court said "you have to look at the issue on a district by district basis."

The constitutional requirement of "standing" limits participation in lawsuits to those directly impacted. To have standing, a party must show an "injury in fact" to their own legal interests. The court effectively ruled that the lead plaintiff, William Whitford, lacked standing because he was not sufficiently harmed. Whitford, who lives in a Democratic district in Madison, was asserting a statewide harm, but the court said "[t]o the extent that the plaintiffs’ alleged harm is the dilution of their votes, that injury is district specific."

According to Smith, "the basic bottom line is there will be plaintiffs with clear standing, there will probably be more added, and when we get back to the district court we should be in the position to win very substantial relief."

Whitford: "We Have a Roadmap"

Whitford, a Professor of Law Emeritus at the University of Wisconsin who envisioned the case along with redistricting expert Wisconsin Rep. Fred Kessler, said he was both encouraged and discouraged by today's decision.

"I am encouraged because here is no reason to think we can't present the evidence about plaintiffs that the court seems to want... [A] number of the plaintiffs already can meet that burden," he said.

But Whitford was discouraged by the long delay. "This case was filed in 2015. We have had two elections under what I think is a clearly unconstitutional apportionment already, that give the Democrats no chance of getting the majority, and have many negative consequences in terms of policy. I don't know how long it is going to go on, but we need to keep in mind that it is important to have a new legislative districting before the 2020 elections. Those are very important elections because that legislature will participate in the redistricting after the new decennial census."

"We have a road map forward. I don't think we have any difficulty meeting the burdens that the court asked us to meet. Once we do that we may well be back in the Supreme Court within a few months," Whitford said.

The case now goes back to the three-judge federal panel that determined that Wisconsin Republicans, using high-speed computer technology and tech savvy consultants, were able to craft maps to solidify their control of the legislature for a decade or more. Their ruling was the first time a federal court had rejected a voting map as an unconstitutional partisan gerrymander in 30 years.

Wisconsin Attorney General Brad Schimel, whose office defended the gerrymandering case, issued a rather muted statement: "I am pleased that the highest court in the land has unanimously reversed the trial court's erroneous decision invalidating Wisconsin's Assembly map. Today is win for the rule of law in Wisconsin, and a testament to the talented attorneys at the Wisconsin Department of Justice."

But Schimel's statement was countered by others. "There is no vindication for the state's rigging of the maps and disenfranchising of our voters" in the ruling said Sachin Chheda, spokesman for the Fair Maps Coalition and the Wisconsin Fair Elections Project.

Wisconsin activists won't simply be waiting for the court to act. "Every one of us should be demanding that our legislators and our governor call special or extraordinary sessions to pass non-partisan independent redistricting reform now--before the 2018 and 2020 elections and before the next voting maps are drawn using 2020 Census data," said Marla Stephens, a member of the Citizen Action of Wisconsin Organizing Cooperative in Milwaukee.

Senate Bill 13, introduced by Sen. Dave Hansen, and Assembly Bill 44, introduced by Rep. Don Vruwink, would give responsibility for drawing up new maps to the nonpartisan Legislative Reference Bureau. The bills are based on a successful model used in Iowa for thirty years.

Advocates for fair maps will be having a rally tomorrow at the Capitol Building in Madison at noon.

Multiple Partisan Gerrymandering Cases Keep the Issue Before the Court

The Court also ruled against challengers in another Maryland partisan gerrymandering case Benisek v. Lamone, denying their request for an injunction against the state's 2011 congressional map but allowing it to go forward for trial. The next move by the Court will be a review of two North Carolina partisan gerrymandering cases next term, Rucho v. Common Cause and Rucho v. League of Women Voters of North Carolina.

"This is by no means the end of the road. The Supreme Court is still actively looking for the right case to establish a standard for what constitutes an unconstitutional partisan gerrymandering," said Karen Hobert Flynn, president of Common Cause. "With Wisconsin and Maryland's cases still alive, and Common Cause's North Carolina case awaiting review by the Supreme Court, the fight to establish constitutional limits on partisan gerrymandering is very much alive."

"While it's disappointing to see the Court punt, the decisions aren't losses," said Michael Li, senior counsel at the Brennan Center for Justice at NYU School of Law. "Both cases go on, and the justices will have the chance to finally say something about when gerrymandering is illegal next term, in a case out of North Carolina with overwhelming evidence of how gerrymandering quashes voters' voices."

Read more about this case here. The Center for Media and Democracy filed an amicus brief in the Wisconsin gerrymandering case which can be accessed here.