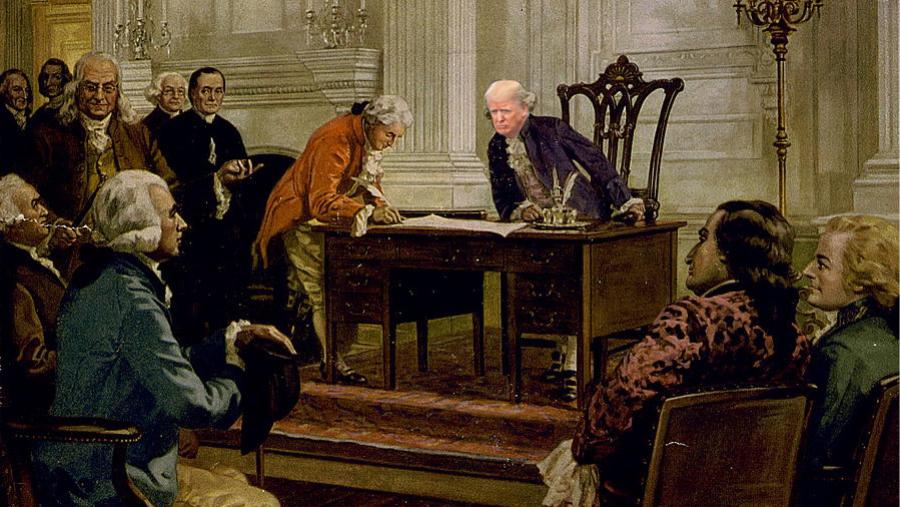 Though ALEC has an uneasy relationship with President Trump, they haven’t hesitated in adopting his “drain the swamp” rhetoric when extolling their plans to amend the federal constitution, repeal workers’ rights or gut social safety net programs.  Trump keeps filling his “swamp” with cronies, political insiders and the corporate lobbyists that also populate the ALEC swamp.

One of these lobbyists, working for the behemoth Chinese online retailer Alibaba, asked me to communicate information about his company to my (presumably male) boss.  When I replied that I am a legislator, he looked me up and down incredulously until I replied “They let women be legislators now.”  He didn’t speak to me again.

Experiencing ALEC is like diving into a swamp inhabited by creatures of the past. ALEC pushes policies that take us back to a federal government sitting on the sidelines while people suffered and starved, drank contaminated water and sustained injuries at work with no recourse.  They are still lamenting the 1965 law that created the Medicaid and Medicare programs, as this, according to Avik Roy of the conservative Foundation for Research on Equal Opportunity, was the “real government takeover of health care.”

So ALEC is trying to backdoor these rollbacks by calling for a first ever Article V constitutional convention to cut federal spending and limit federal authority. ALEC’s Article V constitutional convention push is really a hissy fit of the far right.  They are angry at their inability to persuade Congressional Republicans to gut critical, popular social safety net programs and direct the resulting savings towards massive tax cuts for their corporate buddies and wealthy friends. And ALEC members, as indicated in the Health Taskforce, are besides themselves about Congress’ seeming inability to repeal the Affordable Care Act and shrink Medicaid, which they called for yesterday in two unanimously adopted resolutions.

ALEC’s real goal is preventing the federal government from providing health care and most other things in the first place. And they are working diligently, with the Balance Budget Amendment Taskforce (BBAT) and the Convention of States (COS), to do just that by corralling 34 states to call for an Article V Constitutional Convention.

But divisions have emerged, a rarity in ALEC land.  The BBAT wants a convention to adopt amendments specifically requiring a federal balance budget.  They believe that 27 states out of the 34 needed, have already passed resolutions calling for such a constitutional convention.

I couldn’t help but compare Meckler’s talk this week to his 2013 presentation at my first ALEC conference, as he has since been buffed, shined and suited up.  His message is no longer about leading a revolution, but rather restoring the constitution.  He concludes with the same hard sell for state legislators to embrace our front-line role in defending liberty and “be who the founders expected you to be.”  And Meckler’s solution if legislators don’t go along?  “Tell your colleagues they are willing dupes for George Soros and the radical left.”

When asked by a Michigan legislator why COS doesn’t just join the BBAT and get that done first, the divisions between the two efforts emerged, something rarely seen in ALEC land. The COS folks believe that the authority of the federal government is the disease which must be cured, and the spending is but a symptom.

In the meantime, the next stop for this entire effort is Arizona, where that state legislature has called for a September Convention of States.  When I asked Arizona Rep. Don Shooter about this gathering, he stated that they intend to pass federal constitutional amendments they will ask Congress to consider.  Though he knows Congress won’t act, that underscores the point.

Let’s hope the public won’t go along with this ALEC act which could substantially harm millions of individuals and families throughout our country.

State Representative Chris Taylor, a Democrat, represents the 76th District in the Wisconsin State Assembly. This is the second report from ALEC's Denver meeting.

Rep Taylor's diatribe against Convention of States as presented at ALEC last week represents exactly whats wrong with politics today. As a State legislator she holds the most powerful political position in our nation but she's dead set against bypassing our out-of-conrol federal government to re-instate state sovereignty. Instead, she's willing to accept the unsustainable burden our federal government exerts on every state and every American alive today and generations to come. To her, state governments have no distinction from the federal leviathan. All governments, from local to national, are just a continuum of socialized central control over our people. States are just regional agencies of the federal government doing the bidding of the bureaucracies and the courts. Why bother with regaining our sovereignty and freedoms through an Article V convention when the feds will take care of all us forever more?
I’m concerned you (a public servant) see invoking the constitution as a hissy fit. If our elected officials don’t listen to our votes, a “hissy fit” in the form of a state led Article V convention is in order. The Article V movement isn’t about political wings (or ALEC). ITS ABOUT RESTORING A DEMOCRATIC REPUBLIC. The US gov’t (under both republicans and democrats) has NOT limited its powers, is NOT fiscally responsible, and does NOT limit terms of its officials. I DO NOT BELIEVE THE US GOV’T EITHER REPUBLICAN OR DEMOCRAT CAN OR WILL CONTROL ITSELF. Federal officials take an oath of office to uphold the constitution. Why has the US gov’t allowed the national debt to rise to $20T? Does a $20T debt contribute to a “perfect Union”? LOUISIANA CAN’T AFFORD ITS PORTION OF THE FEDERAL DEBT. CAN WISCONSIN? Since the US gov’t EITHER REPUBLICAN OR DEMOCRAT will not control itself, the states need to convene a convention to propose constitutional amendments as described in Article V
The problem with Congress is representatives who believe they are sent to Washington to solve every problem. We at Convention of States believe health care and such issues are best solved without adding layers of bureaucracy. We are after less government interference. The 17th amendment is a great option along with term-limits.
The fact that over 30+ million people are now able to receive affordable health insurance via the PPACA, is proof that "the states" are not best at solving quite a few issues that citizens have. And let us stop pretending that "state bureaucracy" is any better or smaller than Federal bureaucracy. As for term limits, I would agree with them if WE can stop the gerrymandering where these politicians pick their constituents.
No, we don't intend it to give tax cuts to the wealthy at everyone else's expense. One of the things I hope COS does is that it will end the Fed Ed atrocity known as Common Core, the Every Student Succeeds Act, the Workforce Innovation and Opportunity Act, and more that will, if not stopped, turn us into a planned economy where the government and Big Business determine where we work. Another thing we can gut is all this government spying. I believe they are going way past the bounds of the Fourth Amendment and need to be put back in line. And yes, I'd like to use this to get rid of Export Import Bank and other crony subsidies for Big Business.
" ALEC pushes policies that take us back to a federal government sitting on the sidelines while people suffered and starved, drank contaminated water and sustained injuries at work with no recourse." It would seem Ms. Taylor believes the purpose of federal government is to protect its people from the risks of living rather than protect the natural rights we have been bestowed - "among which are life, liberty, and the pursuit of happiness". When our enemies, either foreign or domestic, seek to deprive us of our given rights, Washington has both the power and the duty to protect our exercise of those rights. Food, water, and work environment are benefits we have the responsibility to provide from our own effort. The risks of life are inherent everywhere. It's irrational to think that government's job is to protect us from all risks.
What is wrong with “drain the swamp”? Both Republican and Democrat are taxpayer money laundering by giving money to their favored entities and receiving part of that taxpayer money back to themselves. Both are insider trading. They are taking their knowledge and cashing in on stocks, cheating their fellow investors trying to maintain a retirement account . Is there a reason not to “drain the swamp” here? How about wanting to eliminate programs and return us to the past? Amendment X tells us some tasks are for the federal government and others for the states. Return those tasks and both can focus their own responsibilities. such as protecting our waters. If this author sees these as a bad things, what other things is she mistaken about? It would seem that ALEC runs the Convention of states. There are many other individuals and groups involved. Read Amendment X then look at the Constitution from that perspective. Too much hate and misrepresentation, not enough substance.
It seems to me that ALEC is the one that needs to be watched out for. They represent the interests of the Oligarchy that feeds them money, not the interests of working Americans. Their goal to "drown the government" while feeding the Oligarchy on the backs of working Americans is treacherous in the least. Just look at laws that have been passed in various states pushed by ALEC owned legislators, these laws have not benefited the majority of people, just emboldened and lined the pockets of those legislators that helped to push them. ALEC is another cancer to our democracy!