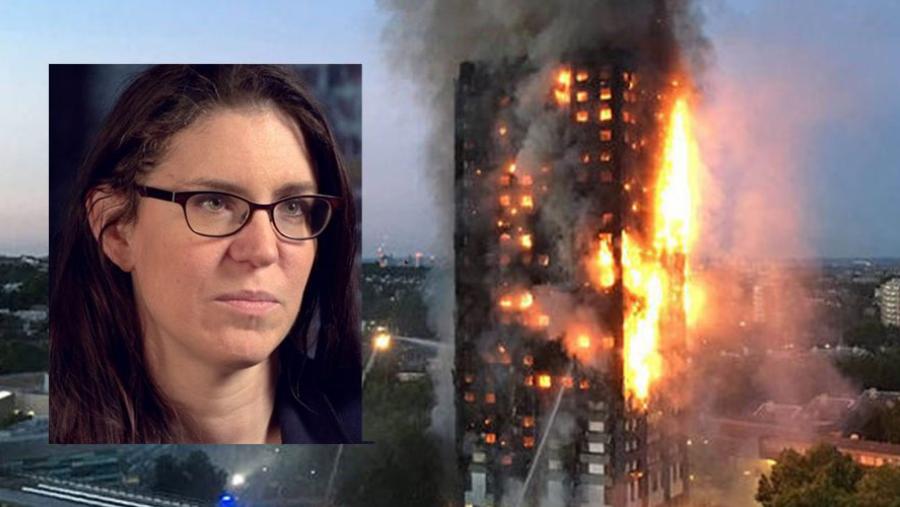 The world looked on in horror as Grenfell Tower, a public housing project in London, became a near-biblical pillar of fire that burned at least 80 people to death. That horror was only made worse by revelations that government officials in the grip of the ruling Conservative Party's anti-regulatory, budget-slashing, "free market" mind set had resisted fire safety regulations and saved money by installing substandard -- and highly flammable -- 'cladding' to the building's exterior.

Prime Minister Theresa May's political stature has fallen sharply as the result of the tragedy. As the New York Times reported:

The fixation on budget cuts led officials to use cheaper, but highly flammable, materials for the exterior of the building. It also led to cuts in emergency services that caused needless additional deaths as firefighters, saddled with substandard equipment and plagued by staffing cuts, struggled to rescue victims as the fire raged on.

Commentators on both sides of the Atlantic have noted the disastrous effects of the conservative government's fanatical devotion to cutting red tape, its fixation on budget-slashing austerity economics, and its supernatural belief that the mythical powers of the "free market" will lead profit-seeking industries to "police themselves."

The headline to a Times editorial summarized the cause of the tragedy: "mindless deregulation, senseless harm." Three officials, including two members of May's Conservative Party, resigned in the wake of the disaster. Everybody agreed that the government actions leading up to these fatalities was indefensible.

Well, almost everybody. A Koch-trained columnist named Megan McArdle told her readers at Bloomberg View that "we should wait until we can establish that it was actually a bad calculation" to block regulations that would have required fire sprinklers in buildings like Grenfell Tower.

McArdle offered words of support for the Conservative Party's former housing minister, Brandon Lewis, who said years ago that "it is the responsibility of the fire industry, rather than the government, to market fire sprinkler systems effectively and to encourage their wider installation."

The deaths, McArdle assures us, are regrettable. But when it comes to government's role in the catastrophe, Megan doesn't really mind. She writes that Lewis' statement "indicates he was thinking about the question in the right way -- taking seriously the fact that safety regulations come at a cost, which may exceed their benefit."

McArdle adds: "When it comes to many regulations, it is best to leave such calculations of benefit and cost to the market, rather than the government."

At last report, the "market" McArdle would have us rely on had killed 80 people. Among them was a five-year-old boy named Isaac Paulos, the latest victim to be identified.

Megan McArdle is the product of the Koch Brothers' propaganda factory, which works to inject their extremist ideology into mainstream discourse. She began her writing career blogging under the name "Jane Galt." The name is an homage to Ayn Rand, the drug-addled extremist writer with a fascination for psychopaths whose novelistic heroes are typically powerful, amoral men (who sometimes commit rape). John Galt, one of Rand's protagonists, became an iconic figure to right-libertarians by disappearing from the world (a gesture his fans often threaten to repeat but regrettably have yet to perform.)

Perhaps Kochs recognized a kindred spirit after "Jane" wrote a blog post suggesting that all corporate taxes be eliminated. In 2006 she wrote an essay for the Koch-funded magazine "Reason" entitled "The Virtue of Riches: How Wealth Makes Us More Moral," an undertaking that must have further endeared her to the self-serving billionaire brothers.

"Jane Galt" seemed to reflect her mentor Rand's sadomasochistic leanings. In a 2003 blog post advocating violence against peace demonstrators, she wrote that she will "laugh" when someone "picks up a two-by-four and teaches (protesters) how very effective violence can be ..."

In a foreshadowing of the bad predictions and miscalculations that have plagued McArdle throughout her career, "Jane" called economist James Galbraith "paranoiac" in 2003 for predicting that the Iraq war would cost $2 trillion. (A better description would have been "optimistic," since that war has already cost at least $3 trillion, while the total cost of the Afghan and Iraq wars now stands at an estimated $4.79 trillion.)

But "Galt"/McArdle" got her real training in right-wing agit-prop for the ruling classes at the Koch-funded Institute for Humane Studies" (IHS) at George Mason University, which pays writers a healthy stipend to "immerse (themselves) in the ideas of a free society through a rigorous week of lectures, discussions, and socials.

Koch Family Foundations have provided a massive stream of funding to IHS over the years -- more than $30 million, according to Greenpeace. Charles G. Koch has been actively involved in IHS, serving as a board member or board chair for decades. Emails obtained by the Center for Media and Media and Democracy and reviewed by this writer show that the equally far-right Bradley Foundation has also been funding IHS.

In a 2013 grant proposal record from the Bradley Foundation lauded IHS: "For more than 50 years, IHS has been identifying and facilitating the development of talented students and scholars who share an interest in the principles of the free society" and that it "provides career assistance for students preparing for careers in policy, teaching, and the media." That assistance includes "using its public relations capacity to arrange print/broadcast media placement for the work of scholars in its network."

Since her "education" at IHS, McArdle has remained loyal to the cause. She returned to IHS in 2011 to participate in a seminar on "Journalism and a Free Society." The brochure for that program has been deleted from the seminar description, but topics reportedly included "Is an 'objective' press possible — or even desirable?"

McArdle also benefits financially from her husband's cozy relationship with the Kochs. Peter Suderman has worked at a number of Koch-funded institutions, including the Competitive Enterprise Institute, American Future's Foundation and now the Koch mag. "Reason."

Project S.H.A.M.E, which tracks conflicts of interest and corruption in the media, notes that McArdle hosted a 50th anniversary gala dinner for IHS that honored Charles Koch. They point out the group took some pains to keep her involvement private, "scrubbing her name from the dinner announcement page" after the event took place.

Since then, McArdle has pursued a career that is as noteworthy for its conspicuous errors as it is for its extreme statements and ad hominem attacks.

McArdle memorably miscalculated the effect of repealing Bush's tax cuts by a factor of 10, and was startlingly unapologetic about her error when it was brought to light. ""The calculator on my computer won't go into the billions," she wrote, "and I truncated incorrectly. The main point stands ..." (It didn't.)

McArdle brought her characteristic blend of misleading invective and poor data analysis to her attacks on Elizabeth Warren and the Consumer Financial Protection Bureau, targets of ire of McArdle and her billionaire patrons alike. (Those attacks are deconstructed here.) She deceptively edited a tweet from financial writer Helaine Olen in order to make the argument that health care is a business and not a right. (That argument is rebutted here.)

McArdle was spectacularly wrong about the extent of the last decade's financial meltdown when it first surfaced in August 2007, minimizing the likelihood of serious harm in a column entitled "Don't Panic!" (It has been deleted, but a copy can be found here.) In it, she sneers at the "ponderous proclamations" about the depth of the crisis and insists that, while things look bad, the parallels between that brewing crisis and past financial disasters were "less than compelling."

The McArdle magic still seems to be working. The Grenfell Tower piece includes a note explaining that a figure cited in the footnote had been corrected.

Everyone who writes on economics will make an error from time to time. For most of us, it's a rare event. It's also an occasion for profound depression and self-flagellation. For McArdle it's a more common occurrence, one she either ignores or blithely shrugs off.

It would be easy to dismiss McArdle as the journalistic equivalent of that person at a party who loudly pontificates in the corner to an ever-diminishing audience. She does not seem to have had much success injecting her patrons' extremist and self-serving philosophy into the political debate. In that sense, McArdle is little more than a "troll" -- the kind of person who thrives on making outrageous statements to offend their political opponents.

But this IHS "scholar" serves a useful function to the Koch Brothers. Her strategy of deliberate outrage normalizes ideas that have justifiably been outside the political mainstream throughout modern history. Her treatment of the human suffering caused by Koch-backed policies desensitizes people to their brutality.

This time she may have gone too far. This is not an abstract philosophical debate. The Grenfell victims have faces and names. They were men, women, and children. This kind of extremism comes with a body count.

The New York Times Editorial Board concluded: "After the Grenfell Tower fire, the dangers of reflexive rejections of regulation, like Mr. Trump's executive order, are clearer." But "reflexive rejections of regulation" are precisely what billionaires like the Koch Brothers want. That's why the Koch-funded American Legislative Exchange Council (ALEC) is pushing the federal "REINS Act," a bill designed to make it all but impossible for government agencies to produce new regulations without eliminating old ones.

That bill was introduced in the Senate by Sen. Rand Paul (R-KY). Sen. Paul has also benefitted from the Kochs' largesse. Koch Industries has been a generous supporter. Paul penned a fawning tribute to the Charles and David Koch for TIME magazine, perhaps as a public thank-you, cooing about their "passion for freedom" while insisting that "ideas and convictions ultimately trump all else."

Americans for Prosperity (AFP), a Koch Brothers front group, has been pushing hard for the regulation-busting REINS Act. It has produced digital ads and written letters of support for both Wisconsin's version of the REINS Act (which passed earlier this year) and the national bill introduced by Paul. AFP and ALEC lobbied heavily for the bill, and former AFP staffer Phil Kerpen received a commitment from Donald Trump to sign the bill should it reach his desk as president.

The death of Isaac Paulos reminds us that regulations save lives. The Koch Brothers have invested large sums in trying to make us forget that fact. Megan McArdle's career offers us a glimpse into their media manipulation machine. The Grenfell fire offers us a taste of the world they would create.