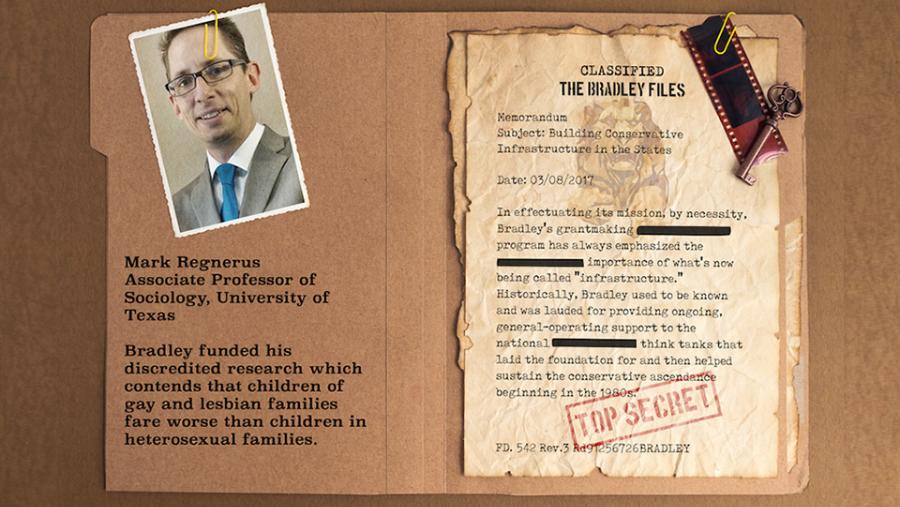 A trove of documents exposed by the Center for Media and Democracy shows that the right-wing Lynde and Harry Bradley Foundation wants to build a right-wing "infrastructure" across the country to promote its extreme agenda.

Unfortunately, the Foundation's desire to police what happens in American bedrooms is part of that agenda.

To promote its socially conservative view of marriage and the family – especially its opposition to marriage equality – the Bradley Foundation has been pushing the work of a discredited researcher who thinks liberal women want more sex, porn-watching makes men support gay marriage, and gay marriage makes straight men both more promiscuous and more likely to … well, keep reading.

In 2012, a University of Texas sociologist named Mark Regnerus released a report on children who grew up in "unconventional" families. These were defined as homes where the parents were "of the same sex," "biologically unrelated" (to the child), "unmarried but co-habiting," or where the biological mother was either single or "had a romantic relationship with another man."

"Unconventional," in other words, means "anybody living a lifestyle social conservatives don't like."

The Regnerus report concluded that children were harmed by growing up in homes with same-sex parents. This finding appeared to validate anti-gay marriage views that heretofore had only been supported by prejudice. Unfortunately for Regnerus, 200 social scientists soon signed a letter to Social Science Research, the journal that published his work, challenging the paper's "intellectual merit" and questioning the "academic integrity" behind its publication.

The brief extensively rebutted Regnerus' work. It explained that most of the participants" studied by Regnerus "spent very little, if any, time being raised by a 'same-sex couple,'" which meant that its most incendiary anti-gay conclusions were invalid. A February, 2013 brief from the American Sociological Association (Regnerus' professional society) reiterated those findings.

Unfortunately for the Bradley crowd, the conservative Court ruled in favor of marriage equality rights in that landmark civil rights case.

Liberals Just Want to Have Fun

Undeterred, Regnerus continued to offer his own socially conservative and somewhat bizarre opinions, often with a thin layer of pseudoscientific gloss. He claimed, for example, that "liberal" and "very liberal" women want to have much more sex than other women.

As many people know, social conservatives tend to find women's sexual desires disturbing and frightening. This observation can be seen, therefore, as a condemnation of liberalism.

Regardless of his motivations, Regnerus goes on to speculate that liberal women want more sex than other women because they're not religious enough. Specifically, Regnerus theorizes that sex provides the "transcendent" feeling others achieve through faith – that these liberal women are getting in bed, as it were, what they're not getting in church.

Regnerus generously adds that "other theories" that might explain his survey findings "are welcome." (Here's one: Maybe liberal women are not ashamed to admit they have sexual feelings.)

Why would he think that? Perhaps it's because, to a certain kind of mind, the concept of marriage is associated primarily with sex acts, rather than with the mutual love and commitment many others ascribe to that institution. (Or is that just when the couple is gay or lesbian?)

Regnerus' troubles didn't end in 2012. Information released in March, 2013 as the result of an open-records request showed that his parenting paper was, in fact, a kind of a pay-to-play operation. The released documents revealed that the report was timed, in part, to influence upcoming Supreme Court decisions about marriage equality.

The report's primary funder was the conservative Witherspoon Institute, which paid $695,000 for the study. The Witherspoon Institute had already declared on its website that marriage is "a personal union, intended for the whole of life, of husband and wife." (That statement has since been removed, but was reported on here.)

The 2013 controversy was not enough, however, to deter the Bradley Foundation from continuing to support Regnerus. A grant proposal record from November 2013 shows that Regnerus' "Austin Institute for the Study of Family and Culture" applied for $125,000 in additional funding.

But, warned the Foundation, that work "does not by itself establish that having a parent in a same-sex relationship is a root cause of the differences in outcomes (and) … draws no conclusion about how marriage should be defined." These are presumably omissions to be rectified in future research.

The grant proposal goes on to list some of the Austin Institute's proposed topics for a project entitled "Relationships in America." They are not modest. According to the memo, "examples" include:

"1) what are the family and social benefits of having more children rather than fewer; 2) is marriage becoming 'a religious thing' such that the unreligious are avoiding it; 3) is educational loan debt associated with the choice to cohabit and delay marriage; 4) is monogamy within marriage increasing; and 5) is there a connection between Facebook use and relationship problems."

The grant proposal record recommends that the Foundation provide $100,000 for this work. The scientific definition of "a religious thing" is not provided (Austin Institute for the Study of Family and Culture, Grant Proposal Record, 11/12/2013).

Regnerus was not through making off-the-wall comments. In 2014, he proclaimed that the normalization of same-sex marriage would lead many straight married men to demand open relationships. (He does not explain how same-sex couples' entry into a typically monogamous institution might weaken straight men's commitment to monogamy.)

He did not explain why that might be so – or, for that matter, why such a change would be socially deleterious.

One might think Regnerus' wacky pronunciations and shredded scientific reputation had rendered him unworthy of further support, even from an extreme organization like the Bradley Foundation. One would be wrong. Another grant proposal record, this one dated 2016, explains that "the Austin Institute is seeking a grant…in support of five projects on marriage and family."

It explains that Regnerus now wants funding for 2016 and beyond for projects that include:

The 2016 grant proposal record recommended that $50,000 be provided for this work, and remarks that the Institute's work "provides an opportunity to present a quality academic argument capable of reshaping how Americans in general have come to think about marriage and the family" (Austin Institute for the Study of Family and Culture, Grant Proposal Record, 2/23/2016).

The Bradley Foundation apparently thinks it can "reshape" a nation's thinking about marriage and family by funding the work of a controversial academic with extreme ideas and discredited methodology.

Granted, with nearly $900 million in assets, the Foundation has money to burn. But with the flawed Regnerus as its standard bearer, the Foundation may be facing its stiffest challenge yet.