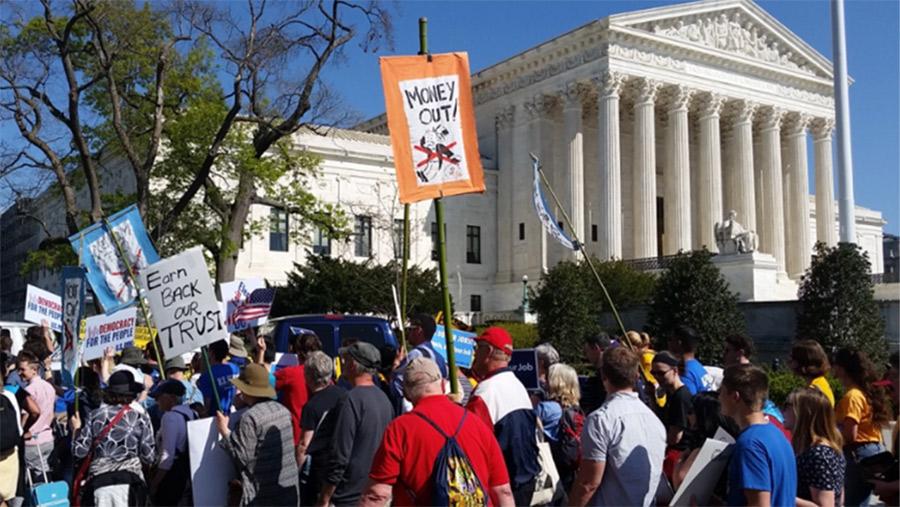 Judge Neil Gorsuch played a masterful game of hide-the-ball during his confirmation hearings, deftly dodging scores of questions from senators to reveal as little as possible about his judicial leanings and positions on any of the critical legal issues facing the nation.

"If I indicate my agreement or disagreement with a past precedent of the United States Supreme Court, I'm signaling to future litigants that I can't be a fair judge," Gorsuch responded when Senator Diane Feinstein tried to get a read on his views concerning Roe v. Wade.

He was no more forthcoming about controversial and closely divided rulings like Citizens United, which unleashed corporate spending in elections, or Shelby County, which struck down a key component of the Voting Rights Act, or Heller, which overturned a gun safety law.

But Gorsuch's signals have already been sent to—and received by—the corporate-backed groups that pre-selected him for the job and the billionaires who have spent millions to capture the current open seat on the nation's highest court.

Judge Gorsuch authored seven dissents in 2016, more than in the preceding three years combined. Gorsuch's dissents gave him the opportunity to take a tough stand against workers, in the now-infamous "frozen trucker" case; blast the NLRB, a favorite target of the corporate Right; side with Utah's governor for withdrawing state funding from Planned Parenthood in retaliation for providing abortion services; and back up a sheriff in the case of a man who was strip searched and held in jail for five days after being stopped for a defective license plate light.

Those cases, along with his lengthy 2016 concurrence in Gutierrez v. Lynch--where he laid out his case for rolling back "Chevron" deference to government agency rules--let Gorsuch check off most of the boxes on the Right's checklist for a Supreme Court nominee. Together, they made big corporations, the Religious Right, and the tough-on-crime crowd very, very happy.

Gorsuch's smoke signals were certainly seen by Leonard Leo, executive vice president at the right-wing Federalist Society, who played a lead role in hand-picking judges for Trump's outsourced nominee list. The Federalist Society is bankrolled by the Koch brothers, the Mercer family, Chevron, and other corporate interests, and serves to bring together special interests and judges much in the same way that the American Legislative Exchange Council (ALEC) does for legislators.

It was Leo who contacted Gorsuch to let him know he was on the list, and Leo is currently on loan to the White House to shepherd Gorsuch through the nomination process every step of the way. Leo is closely connected with the Judicial Crisis Network (JCN), the dark money group that has spent $17 million to block Garland's nomination and run pro-Gorsuch ads targeting Democratic senators up for election next year in states that went for Trump.

JCN's treasurer is Neil Corkery, and the organization got all of its cash from the Wellspring Committee in 2015, another dark money group run by Neil's wife, Ann, according to the New York Times. The Corkerys have been affiliated with Liberty Central, a Tea Party group run by Justice Clarence Thomas' wife, Virginia, as well as the Catholic League and the National Organization for marriage, two groups known for their opposition to abortion and marriage equality.

Gorsuch and his backers claim the righteous cause of protecting judicial independence as the basis for his tight-lipped confirmation performance, as if somehow it would be improper for the American people to know what they are in for with Gorsuch in a life-tenured seat on the Supreme Court. But you'd better believe Leonard Leo, the Corkerys, and Gorsuch's other big-money backers know exactly where he stands.

Gorsuch's refusal to discuss his judicial views with senators also lies in sharp contradiction to the words of former Justice Antonin Scalia, the justice Gorsuch would replace and that his sponsors expect he will emulate.

"A judge's lack of predisposition regarding the relevant legal issues in a case has never been thought a necessary component of equal justice, and with good reason," Scalia wrote in Republican Party of Minn. v. White, while striking down a state rule barring judicial candidates from announcing their views on legal issues. "Proof that a Justice's mind at the time he joined the Court was a complete tabula rasa in the area of constitutional adjudication would be evidence of lack of qualification, not lack of bias."

Scalia decried what he called "state-imposed voter ignorance" and criticized the notion of "plac[ing] most subjects of interest to the voters off limits."

But that's precisely what Gorsuch did at his Senate confirmation hearings.

Senator Sheldon Whitehouse put a fine point on the problem during Gorsuch's last day of testimony.

"There's a small group of billionaires who are working very hard to influence and even to control our democracy," Whitehouse said. "They set up an array of benign sounding front groups to both organize and conceal their manipulations of our politics."

"I'm trying to figure out what they see in you that makes the $17 million…worth their spending. Do you have any answer for that?" Whitehouse asked.

"You'd have to ask them," Gorsuch responded.

"I can't, because I don't know who they are. It's just a front group," Whitehouse said, sounding exasperated.

If the only test for the Supreme Court is the strength of one's resumé, then Merrick Garland was every bit as qualified as Neil Gorsuch. Yet Senate Republicans, backed by some very powerful special interests, blockaded Garland and are getting ready ram through Gorsuch, even if it takes a dramatic Senate rules change to do it. They know perfectly well why, and American voters deserve to know too.

This article was first published on Huffington Post by Arn Pearson in his capacity as a senior fellow for People For the American Way.

This reminds me of the old "Trips for Judges" program and other events run by F.R.E.E. Ginny Thomas attended these too, along with Scalia and many of the Federalist Society players. The names of the fronts may change, but the players, the money, and the intent remain constant. That's the rightwing playbook.