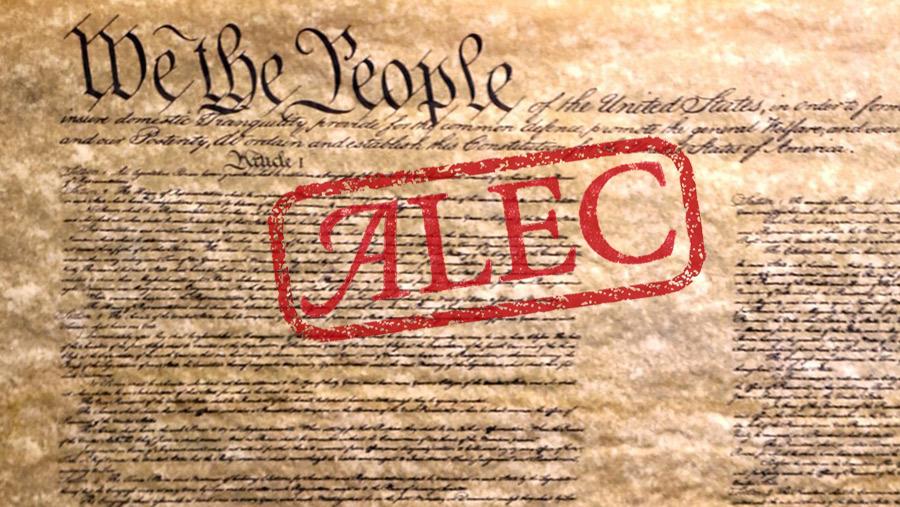 After the 2010 tea party takeover of Wisconsin, it became clear that the real force behind policymaking in Wisconsin is not the voters, but the American Legislative Exchange Council (ALEC), the most powerful right-wing policy-making machine in the country. A ménage a trois of powerful corporations, state legislators, and right-wing think tanks, ALEC pushes out model legislation that promotes corporate hegemony.

I know because I am a Wisconsin legislator, and a member of ALEC.

For the last six years, the ALEC agenda has rolled through Republican state houses - including mine - crushing labor unions and workers' rights, voting rights, consumer and environmental protections, and campaign finance reforms. And now, ALEC, their funders and partners, are leading the effort to amend the U.S. Constitution to kneecap the federal government.

At my first ALEC conference in 2013, Citizens for Self-Governance (CSG) rolled out the "Convention of States" campaign. Their scheme was to get 34 states to pass resolutions calling for an Article V Convention of States, provided for in the U.S. Constitution, in order to propose constitutional amendments that severely limit the government's ability to regulate and spend. CSG's Mark Meckler, founder of the Tea Party Patriots, and his colleague Michael Farris railed against the federal government, civil rights, and social safety nets. Meckler proselytized like a preacher at a church revival, exhorting us to use our power as state legislators to save the country and join their movement, for which we would be handsomely rewarded with bundled campaign contributions and grassroots support. We were given a model Article V constitutional convention resolution, urged to save the Republic, and sent on our way.

One of my Republican colleagues was sitting several rows in front of me, and I knew then this effort would come to Wisconsin. His resolution, which would make Wisconsin the 30th state calling for a Constitutional Convention to propose a balanced budget amendment, will soon be considered by the Wisconsin legislature.

ALEC is a driving force behind this austerity movement, supplying model bills, "how to" books, and support for pro-amendment groups.

The last time we had a Constitutional Convention, George Washington served as chair. This is a high-stakes process. The convention can amend the Constitution in any way it sees fit, and can write its own rules. In a hyper-partisan environment, most convention delegates would be chosen by Republican legislatures. The only safeguard is that three quarters of states must ratify any proposed amendment.

After CSG's presentation, a representative from the right-wing Madison Coalition asked about my thoughts on such an effort. I told him I didn't think people would go for it. He replied that because Republicans controlled so many state governments and the corporations pushing these changes had unlimited money to spend, they didn't really need the people.

That sums up ALEC. ALEC's drive to amend our constitution has nothing to do with actual people and everything to do with their big corporate backers. They want to stop the federal government from protecting our environment, giving workers a voice at the table, paying fair wages, and giving the economy a boost during recessions. To them, government is not about the people, but the most powerful doing what they want, when they want, and to whom they want.

As I left that first Convention of States meeting, I was asked by a young, enthusiastic ALEC staffer whether I was "ready to fight the fight with us?" Indeed, we must be ready to fight.