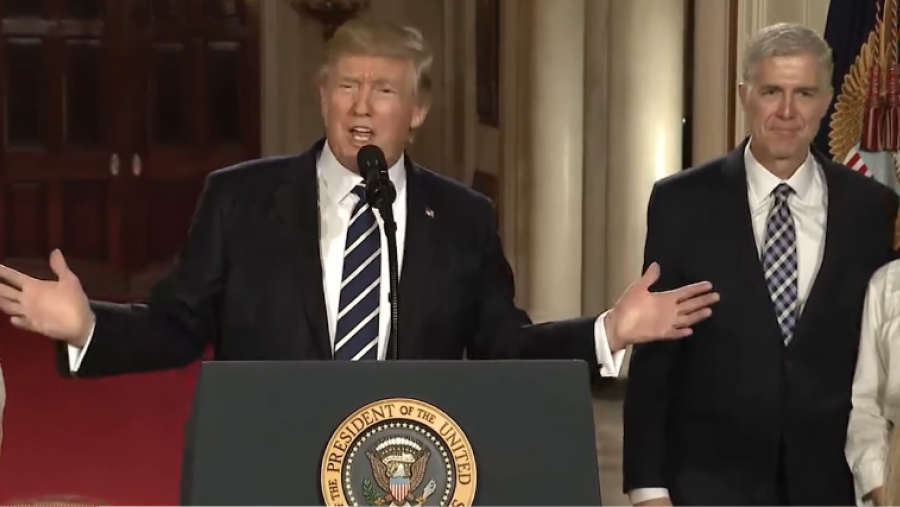 After blocking confirmation of Justice Scalia’s replacement on the U.S. Supreme Court for a full year, the Senate Judiciary Committee is now preparing to take up the nomination of Neil Gorsuch for the post on March 20, barely seven weeks after President Trump announced his pick.

However, too much has transpired in the intervening days for the Senate to treat this nomination as “business as usual.”  Recent revelations have thrown the White House and Department of Justice into turmoil and created a crisis of legitimacy for the Trump Administration that will spill over to the nation’s highest court if there is a rush to judgment on Gorsuch’s confirmation.

In addition, the Senate and the public lack key information about Judge Gorsuch needed to give his nomination thorough consideration.

Republicans fighting to repeal the Affordable Care Act have shown their willingness to rush major legislation in order to short-circuit a thorough review process that would expose the dangerous holes in their proposal. So too they’re attempting to rush the confirmation process of Neil Gorsuch to avoid public scrutiny of his extreme views and record.

Since Trump nominated Judge Gorsuch for the Supreme Court on January 31, we’ve witnessed the forced resignation of National Security Advisor Michael Flynn for lying to the Vice President about his contacts with Russian ambassador Sergey Kislyak, and seen Attorney General Jeff Sessions recuse himself from any investigations into the Trump campaign after coming under fire for misleading the Senate Judiciary Committee about his previously undisclosed meetings with Kislyak. Now we find out that Flynn was paid more than $500,000 to lobby for the Turkish government even while attending classified intelligence briefings.

Meanwhile, President Trump has attacked the media as the “enemy of the people,” accused former President Obama of illegally wiretapping Trump Tower, and ordered the immediate purge of 46 U.S. Attorneys with no advance notice, tactics which, taken together, are more characteristic of authoritarian regimes than democracies.

America has never seen this level of chaos in a new presidency in modern times, and the impact is being felt across the country.

Trump currently has a 43 percent approval rating, the lowest ever by far for a new president at this point in his term for as long as such poll numbers have been collected.

Recent polling further reveals that 48 percent of American voters think Trump’s ties to Russian President Vladimir Putin are bad for the United States.  The same share of voters believe the President has either committed a crime (20 percent) or done something unethical (28 percent) in his dealings with Russia. Only 40 percent of voters believe Trump has done nothing wrong.

The Senate Judiciary Committee’s current focus — and rightly so — is on getting to the bottom of Russian interference in the 2016 elections and possible collusion with the Trump campaign. Last week’s confirmation hearing for the nomination of Rod Rosenstein as Deputy Attorney General had some members of the committee demanding that he commit to appointment of a special prosecutor as a precondition for his approval.

Senators should not take up the confirmation of Judge Gorsuch until matters so critical to our democracy and national security have been resolved, yet Republicans seem intent on rushing his nomination forward.

The Trump Administration has pushed through a number of cabinet-level appointments in recent weeks without full and proper vetting, proper ethics paperwork, or a complete record for Senators to review. That’s bad enough for positions critical to the functioning of the federal government, but completely unacceptable for a lifetime appointment that will shape the direction of the Supreme Court for decades to come.

The fast pace of Jeff Sessions’ confirmation as Attorney General — one of eight major confirmation hearings scheduled over the span of three days — allowed him to dodge numerous questions about potential conflicts of interest given his role as a close political advisor and friend to Trump during the presidential campaign and transition.

When asked if he would recuse himself from any decisions regarding potential criminal prosecutions in connection with Russia’s hacking of the election, Sessions got away with saying, “I am not aware of a basis to recuse myself from such matters.”

As a result, mere weeks later, America is left with an Attorney General who cannot ethically participate in one of the most important matters facing the nation. And Sessions will be likewise hobbled on a host of other legal issues that may come before the Department of Justice, including Trump violations of the Constitution’s Emoluments Clause prohibiting foreign gifts and bribes, conflicts of interest created by Trump’s refusal to divest his business holdings into a blind trust, and potential insider trading by Trump family members actively involved in both White House and Trump Organization decision-making.

Similarly, Senate leadership rammed through the confirmation of Scott Pruitt as head of the Environmental Protection Agency, despite his stonewalling of Environment and Public Works Committee members who asked to see his extensive emails with giant fossil fuel companies.

Senate Majority Leader Mitch McConnell refused to postpone Pruitt’s floor vote, even after an Oklahoma judge found Pruitt in violation of the state’s Open Records Act and ordered Pruitt to turn over thousands of such emails to the Center for Media and Democracy (CMD) just a day before the vote. Senate Democrats’ held the floor all night to demand a delay to review Pruitt’s full record, but to no avail.

When CMD received the missing emails and made them public a week later, they showed that, “As Oklahoma’s attorney general, Scott Pruitt, now the Environmental Protection Agency administrator, closely coordinated with major oil and gas producers, electric utilities and political groups with ties to the libertarian billionaire brothers Charles G. and David H. Koch to roll back environmental regulations,” according to the New York Times.

By that time it was too late. Pruitt had already been sworn in to his new post at the EPA, without a full public review of his conflicts of interest with the polluters he is now charged to regulate.

The nation cannot afford to make the same mistakes with a lifetime appointment to America’s highest court.

Top among the Gorsuch matters that need more time for investigation are questions about his handling of controversial cases while serving as a Principal Deputy Associate Attorney General from 2005 to 2006, and his role, if any, in the scandal over the politically motivated firings of nine U.S. Attorneys that ultimately led to the resignation of Attorney General Alberto Gonzales in 2007.

Gorsuch told the Senate Judiciary Committee in response to its questionnaire that, he played a role in “major litigation decisions” and “developing legal strategy” for the Civil Division while at the Justice Department. That division handled some highly controversial cases at the time, including defense of the Partial-Birth Abortion Ban Act of 2003, the Defense of Marriage Act, the National Security Agency’s warrantless wiretapping program, and detention of prisoners at Guantanamo.

In addition, Gorsuch was responsible for helping to supervise the Civil Rights Division at a time when there were serious problems with its politicization and lax enforcement of civil rights laws.

The Campaign Legal Center (CLC) filed an expedited Freedom of Information Act request on February 16 seeking documents related to Gorsuch’s involvement with the Civil Rights Division during the U.S. Attorney firing scandal. Another group, Fix the Court, has been waiting for those records for months.

A 2008 report by the DOJ Inspector General found that the firings in 2005 and 2006 were politically motivated, “severely damaged the credibility of the Department and raised serious doubts about the integrity of Department prosecutive decisions.” The Bush Administration had pressured U.S. Attorneys to find and prosecute voter fraud, despite a lack of evidence, and retaliated against those who would not cooperate.

The scandal ultimately resulted in the resignations of AG Gonzalez and seven other prominent DOJ officials, including the former acting Assistant AG for the Civil Rights Division, Brad Schlozman. It seems highly probable that Gorsuch would have had contact with Schlozman and been aware of what was happening in the division.

“The requested records will shed light on what role, if any, Mr. Gorsuch had in the disastrous hiring and firing initiatives implemented at DOJ during his time there,” CLC wrote in its FOIA request. “How Mr. Gorsuch navigated the issue of the DOJ’s independence under an administration bent on interfering for political gain has significant bearing on how he might approach similar troubling interference as a nominee to, and as a Justice on the Supreme Court.”

The Justice Department turned over 144,000 pages of documents to the Judiciary Committee last Wednesday night, but 90,000 of those were from after Gorsuch left the department. Just days away from the confirmation hearings, it is unclear whether the Committee has all the information it asked for — let alone adequate time to review it — and CLC is still waiting for its FOIA records.

With the independence of the judiciary — as well as the integrity of our elections, a free press, and crucial civil rights — under attack from the White House, the Senate and the public must have a complete record of Judge Gorsuch’s role in or handling of past compromises to our system of impartial justice. Will a Justice Gorsuch fiercely defend the rule of law from political manipulation? Just calling such attacks “demoralizing” is not enough.

Protecting the Integrity of the Supreme Court

If Senate leadership rushes through confirmation of Gorsuch in the next few weeks, after holding the position open for more than a year, it will cast the same shadow of illegitimacy that now lies over the White House over the Supreme Court.

It is time to slow things down, wait to see if the Trump Administration stabilizes, and allow adequate time to review and debate the wisdom of placing Gorsuch on the Supreme Court bench.

The public’s lack of confidence in Trump appears to be spilling over into their views on Judge Gorsuch as well. Just 45 percent favor Gorsuch’s nomination for the Court, the lowest level of public support for a Supreme Court nominee since Robert Bork (31 percent) and Harriet Miers (44 percent). The Senate rejected Bork, and Miers withdrew under intense criticism.

The Senate should take its time and use this moment as an opportunity to rebuild public confidence in our Constitution and system of justice, not further polarize the nation.

This piece was written by Arn Pearson in his capacity as a Senior Fellow at People for the American Way and first published by PFAW as an editorial memo.