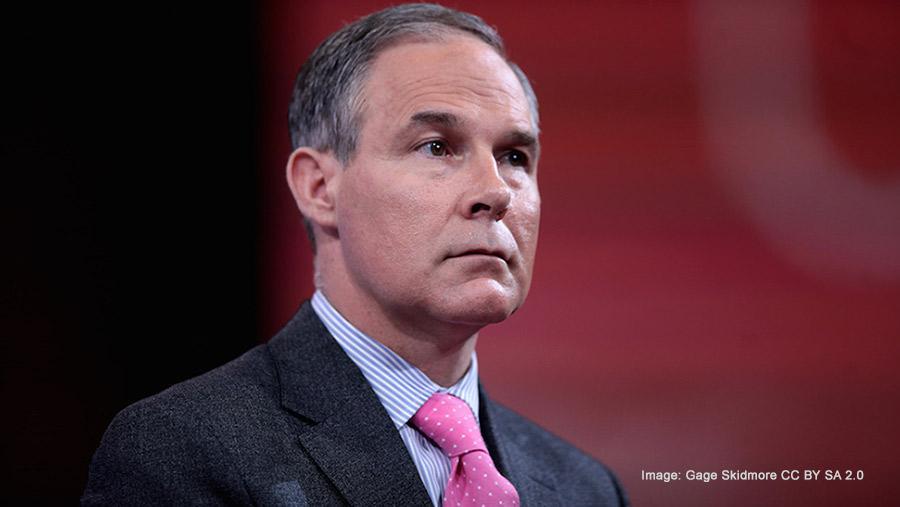 By Nick Surgey and Jamie Corey

Scott Pruitt is President-elect Donald Trump's nominee to be Administrator of the Environmental Protection Agency (EPA). Since 2010, he has been the Attorney General of Oklahoma, having previously served in the Oklahoma State Senate from 1999 to 2006.

Pruitt was the subject of a Pulitzer prize winning New York Times investigation in 2014 ("Energy Firms in Secretive Alliance With Attorneys General") which described "the unprecedented, secretive alliance that Mr. Pruitt and other Republican attorneys general have formed with some of the nation's top energy producers to push back against the Obama regulatory agenda". He describes himself as "a leading advocate against the EPA's activist agenda."

Many fossil fuel funded groups responded to Pruitt's nomination with delight. In a joint January 12, 2017 letter sent to the Senate, leaders from 22 organizations gave their "strong support" for Pruitt's confirmation. The signers featured many climate change denial groups backed with fossil fuel cash, including the Competitive Enterprise Institute, the Heartland Institute and the 60 Plus Association. The American Legislative Exchange Council (ALEC) expressed its own support for Pruitt, who is a former ALEC member, stressing that he would "work constructively with industry" as well as the states to "spur economic growth."

Senator Jim Inhofe, Senior Member of the U.S. Senate Environment and Public Works (EPW) committee which is to hold Pruitt's confirmation hearing, told a crowd in DC on Pruitt's nomination: "I never dreamed he'd be the director of the EPA. You'll love this guy." Senator Inhofe is a notorious climate change denier.

Pruitt has received almost $350,000 in campaign contributions from the fossil fuel industry, according to a review by the Center for American Progress. He named Harold Hamm, the CEO of the oil and gas industry company Continental Resources, Chairman for his election campaign in 2014.

In addition, Pruitt has raised substantial funds for his two federal PACs-known as "Liberty 2.0" and "Oklahoma Strong." According to Politico, Liberty 2.0 has raised more than $168,000 from energy interests, and Oklahoma Strong Leadership has raised $72,000. In January 2017, an attorney for the two PACs stated the two groups were working on a plan for "shutting them both down and disbursing remaining funds."

In February 2016, in conjunction with the RAGA winter national meeting, lobbyist C. Boyden Gray hosted a fundraising event in support of Oklahoma Strong at his home in Washington, D.C.

Pruitt was the focus in a Pulitzer Prize winning New York Times investigative series published in 2014, which examined how numerous Republican attorneys general, including Pruitt, had formed secret alliances with energy corporations. The investigation revealed that Devon Energy lobbyists had drafted letters for Pruitt, which he in turn sent to the EPA under his own name and with almost no changes. Pruitt similarly sent other letters drafted almost entirely by industry lobbyists to other federal agencies. Eric Lipton of the Times received a Pulitzer Prize for this reporting.

Pruitt has made statements that contradict mainstream scientific consensus on climate change:

"That debate is far from settled. Scientists continue to disagree about the degree and extent of global warming and its connection to the actions of mankind. That debate should be encouraged — in classrooms, public forums, and the halls of Congress. It should not be silenced with threats of prosecution. Dissent is not a crime," Pruitt stated in an editorial that he co-authored in May 2016 with Alabama Attorney General Luther Strange.

According to a report by the Financial Times, Pruitt said humanity's contribution to global warming was "subject to considerable debate."

Pruitt's 2014 attorney general campaign website claimed "flawed science" is used to "promote a dangerous no-growth agenda, which has the potential for disastrous consequences domestically and with respect to our national security."

Pruitt signed an amicus brief defending ExxonMobil from investigations of fraud in September 2016, which stated climate change was the subject of "legitimate international debate" and that "the "clearest and most undeniable fact about climate change is that, like so many other areas of science and public policy, the debate is unsettled, the research far from complete, and the path forward is unclear."

History with the EPA

Pruitt calls himself a "leading advocate against the EPA's activist agenda." According to a review by the New York Times, as Attorney General of Oklahoma Pruitt filed 14 lawsuits against the EPA, many of which challenged rules aimed at reducing air pollution and greenhouse gas emissions. "In all but one of these 14 cases, regulated industry players also were parties. And these companies or trade associations in 13 of these cases were also financial contributors to Mr. Pruitt's political causes," the New York Times reported.

Pruitt has been a member of the Republican Attorneys General Association (RAGA) since 2011 and chaired the group for two terms in 2013 and 2014.

RAGA is a highly secretive corporate funded association of republican state attorneys general. Corporations can pay a premium rate RAGA membership fee of up to $125,000 for the privilege of holding private and secret briefings with attorneys general and their staff. Most of RAGA's budget is used to help re-elect republican attorneys general. It has received almost $4 million from fossil fuel industry connected entities since 2014, according to a review of the group's filings by the Center for Media and Democracy.

The Rule of Law Defense Fund

Pruitt was a member of the Rule of Law Defense Fund (RLDF) board of Directors since it was created in 2014 until late 2016. He chaired the group from 2015 until he stepped down in December 2016 following his nomination by Trump.

The RLDF is a 501C4 organization, and so it is not required to publicly disclose its sources of funding. It was created in 2014 by the Republican Attorneys General Association, with which it shares staff and office space and holds joint events.

RLDF is highly secretive about what it does. CMD obtained an agenda for one RLDF meeting, held in April 2016 which featured a session about blocking the Clean Power Plan. Pruitt was a speaker on the panel which also included David Rivkin, a partner at the law firm Baker Hostetler. Rivkin, who is a donor to Pruitt's Oklahoma Strong PAC, is representing the state of Oklahoma in the lawsuit against the Clean Power Plan.

Currently, only two funders of RLDF have been identified, both with deep ties to the fossil fuel industry. Freedom Partners, the mega-fund created by Charles and David Koch, gave RLDF $175,000 in 2014. The Edison Electric Institute (EEI) gave RLDF a $25,000 contribution in 2014. EEI is the trade association for the utility sector, and has engaged in litigation in an attempt to block the Clean Power Plan

In his role as attorney general in Oklahoma, Pruitt has come to the defense of ExxonMobil, currently under investigation by several state attorneys general on whether the company misled the public and its shareholders about the risks of climate change. The investigation came after groundbreaking reporting from Inside Climate News and by Columbia University/LA Times.

Pruitt co-authored an editorial in May 2016 with Alabama Attorney General Luther Strange which criticized the investigations. "We won't be joining this coalition, and we hope that those attorneys general who have joined will disavow it. Healthy debate is the lifeblood of American democracy, and global warming has inspired one of the major policy debates of our time," the co-authored piece stated.

Pruitt was scheduled to moderate a discussion at a 2016 Republican Attorneys General Association (RAGA) conference, at which fossil fuel industry lobbyists met with Republican AG's to discuss the investigations and how they could assist ExxonMobil. According to audio of the session released by CMD, Pruitt withdrew from the session at the last moment due to illness.

In June 2016, Pruitt signed a letter along with 12 other attorneys general that opposed the ExxonMobil investigations. "Using law enforcement authority to resolve a public policy debate undermines the trust invested in our offices and threatens free speech," the AG's wrote in the letter. In September 2016, he filed an amicus brief to defend ExxonMobil in court against a subpoena to provide documents to the attorney General of Massachusetts.

In response to the appointment of Pruitt, ALEC said President-elect Trump "found just the right person to bring fresh leadership and much-needed reform to an agency currently out of control. Anyone who values striking a balance between sensible environmental regulations and the rule of law should delight in Pruitt's appointment."

As a state legislator, Pruitt chaired the ALEC Civil Justice task force which deals with tort reform. "ALEC is unique in the sense that it puts legislators and companies together and they create policy collectively," Pruitt said of ALEC in an interview published in 2003.

After Pruitt became attorney general, he stayed engaged with ALEC on energy and environmental issues:

In 2013, Pruitt spoke at an ALEC meeting during a panel called "Embracing American Energy Opportunities: From Wellheads to Pipelines."

In 2014, Pruitt spoke at a 2014 ALEC meeting that was sponsored by polluting companies including Peabody Energy, ExxonMobil, Chevron, the American Coalition for Clean Coal Electricity (ACCCE).

During his speech about the Clean Power Plan, Pruitt said: "Beyond the regional haze case, we have something on the horizon something more troubling. And that's the proposed rule under 111(d) with respect to CO2 regulation. We have an EPA that is engaged in rulemaking, proposed rulemaking, that seeks to exert itself in a way that the statute doesn't authorize at all."

In my opinion, this piece is missing some very vital information, such as why Scott Pruitt is a valid candidate for the job. In today's day an age, if you look hard enough, you can find something negative about almost anybody. It seems as if the media is so critical of those in charge, that they look over their competence. This is not a strategy proven to be very fruitful and is something that needs to change. We, as a country, need to come together to excel as a nation. Derek Carr of the Oakland Raiders said it best, "There is going to be a coach you like sometimes, and there are going to be coaches you don't like, but we have to come together to be successful." If we as a nation can come together, all of the drama in the media will wither away. The success of the nation today is what is important.