ALEC Pay to Play on Display in Washington, DC 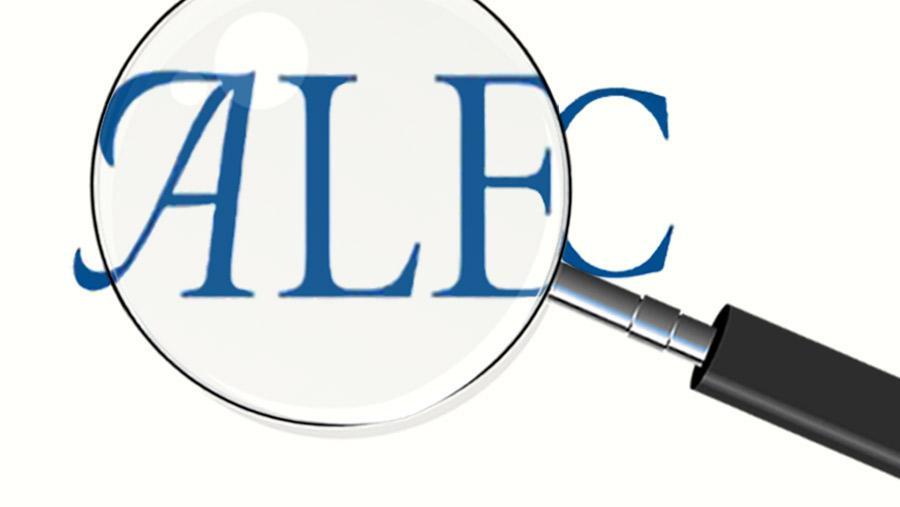 I first attended an American Legislative Exchange Council (ALEC) winter policy meeting in 2014. There I learned that many so-called "model bills" in the ALEC library had become law in my state of Wisconsin. These include the "cable competition" (deregulation) bill, the "castle doctrine" allowing home owners to shoot intruders, and parts of a bill to make it harder for young, old, and poor people to vote.

Upon my return home, I found that corporate ideas flogged by luncheon sponsors while we ate and promoted at lobbyist tables between sessions at the 2014 meeting had subsequently followed the same well-worn path to "model bills," then state law.

Last month, I again attended the ALEC States & Nation Policy Summit. I resolved to study some of the more heavily promoted initiatives that we're likely to see from ALEC and our own corporate-owned legislatures in the next year or two.

The State Policy Network is an umbrella group for more than sixty "think tanks" that help make the national corporate agenda of ALEC seem more local. These included state-based organizations in every state, like the MacIver Institute for Public Policy in Wisconsin. SPN was a Chair's Level (top) sponsor of the meeting and sponsored the Wednesday lunch, and so bought multiple opportunities to promote its legislative agenda to the state legislators attending, including three I describe below.

ALEC members constantly worry that their anti-democratic, anti-social policies will become associated with their corporate sponsors in the minds of the public. Indeed, a number of high-profile corporate funders have left ALEC after being targeted by letter-writing campaigns, boycotts, and other direct action by consumers and shareholders. Ford, Enterprise, and Expedia all dumped ALEC this past year.

In response, SPN provided legislators with a guide to "5 places to look for unconstitutional efforts to stiffle [sic] free speech." For ALEC corporate members, "free speech" apparently means anonymous, unlimited money-as-speech in the political realm, not the speech of ordinary citizens expressing concerns about ALEC's agenda.

According to SPN, the guardians of liberty need to be particularly concerned about "ethics" bills, bills that appoint an "ethics commissioner," bills that redefine "coordination" between non-profits and candidate campaigns, "anti-corruption" legislation, and bills that redefine "electioneering communications" and "political committees." (All quotations are theirs.)

SPN is particularly concerned about disclosure of non-profit donor identities. A quick call to the Goldwater Institute (Arizona) can tell a nervous legislator whether a bill affecting transparency or disclosure in the wake of Citizens United is pushing the needle in the "right" direction.

SPN also wants states to become "financial ready." This term is for states committed to maintaining their financial independence from the federal government, which they say has "an unsustainable spending problem," and which gives grants to states that undermine states' "financial viability and independence." SPN contends that grants may undermine the policies of the grantee states, such as by tying transportation aids to adoption of specific laws or federal housing funds to adoption of fair housing policies.

SPN promotes various budgeting and procurement rules to limit federal influence along with a state-by-state rating. My state of Wisconsin is highly ranked, with two green balls and only one red ball. Surely Governor Scott Walker, an ALEC alum, will not be tricked by the feds into accepting money for subversive projects like rural broadband deployment or inter-city rail service!

The Mackinac Center, Michigan's SPN think tank, was advocating for annual union recertification by majority of bargaining unit members (not just of those voting to promote "workplace democracy for less than the price of a cup of coffee." Naturally, they refer to the cost of recertification votes by mail, not the cost to the economy of depressed wages in states adopting ALEC-backed austerity measures.

Unions have argued that requirements to serve all employees, not just those that pay dues or agency fees, is an unconstitutional taking of union services. The Mackinac Center proposes that unions should no longer serve all members of a bargaining unit, allowing non-members to cut their own deal with employers. The proposal flies in the face of the very concepts of "union" and "bargaining unit," further dividing workers and stacking the balance of power toward employers.

Notice that Mackinac's proposal is self-contradictory. If workers need not accept bargaining by union, why must recertification be a majority of all in the bargaining unit instead of those voting? Consistency is not a requirement for advancing the corporate agenda!

The Pharmaceutical Research and Manufacturers of America (PhRMA) was also a Chair's Level meeting sponsor and long-time ALEC stalwart. I could not see why ALEC and PhRMA are working so hard on prescription opiate abuse until this meeting. What is the connection with drug company profits?

PhRMA has been on a multi-year, state-by-state campaign to prevent concern about prescription opiate abuse from resulting in any restrictions to prescribing their industry's products.  For example, a 2012 New Mexico bill to limit prescriptions for acute pain to seven days was killed by lobbyists in committee.

A newer feature of PhRMA's campaign is the promotion of patent-protected, "abuse-deterrent" opioids. PhRMA wants chronic pain to be coded as a disease, not a symptom, in electronic medical records systems, and it wants the more expensive, abuse-deterrent formulations covered by insurers, even though some experts say the abuse-deterrent qualities are easily circumvented.

PhRMA's campaign is an example of a reoccurring theme for ALEC campaigns: ALEC maintains an array of attractive-sounding but conflicting ideological themes, including "limited government," "local control," "level playing field," and the rarely employed "science-based evidence", used in this case. But PhRMA has no problem throwing limited government and federalism under the bus if they can get the federal Food and Drug Administration to enact the regulations nationwide to get their products more widely prescribed!

McGraw Hill Education, one of the three largest providers of textbooks and digital content in the world, is an ALEC funder, and sponsored the 2016 winter meeting at the highest (Chair's) level. It also sponsored the Friday breakfast and so had the attendees' undivided attention to lay out its policy agenda for expanding its profits from on-line education.

The thrust of the on-line learning advocates was that digital/on-line learning can be delivered to students at lower cost than traditional classroom education, and it automatically adapts to the needs of each individual student.

Utah appears to be pretty far along in implementing the ALEC road map for diverting taxpayer funds from traditional public schools. Money formerly provided to teachers through local boards of education now goes to educational software and service companies. Waterford is a software company with out-sourced Indian coders and a domestic code-testing subsidiary. It made about $10 million in 2015, almost all from the State of Utah. It is technically a non-profit, but its owners are on the payroll and well paid.

ALEC promotes a model Digital Teaching and Learning Plan bill. It requires all school boards to have a plan to introduce on-line teaching and learning. A master plan for the state, technology infrastructure assessments of each school district, consulting, matching funds from school districts, and "workforce alignment" are all part of the education privatization program.

Utah's implementation of Upstart goes part way toward the bill's requirements, but only addresses pre-kindergarten. Pre-K is low-hanging fruit because many districts do not yet have a pre-K program. ALEC's "model bill" requires digital teaching in all primary and secondary grades.

ALEC and McGraw Hill Education aim to mandate this model of private, mass education in state law. If they succeed, we can anticipate students graduating into the workforce with exactly the skills needed by the corporations then running state government, at taxpayer expense, with all their creativity and critical thinking ability squeezed out of them. The private companies that get the contracts to provide the digital content and testing services will make out very well, however!

As these misleading, anti-government movements gain momentum, it is important to understand them for their true purpose: to remove restrictions on business that could limit corporate profits. Watch for these initiatives coming to ALEC-controlled statehouses in the form of model bills and resolutions. Understanding the effects and true purposes of this legislation is our best defense!

Steve Arnold is the Mayor of Fitchburg, Wisconsin.