Frackers Knew: Fossil Fuel Industry Has Known since 1967 that Injection Wells Cause Earthquakes, despite Denials 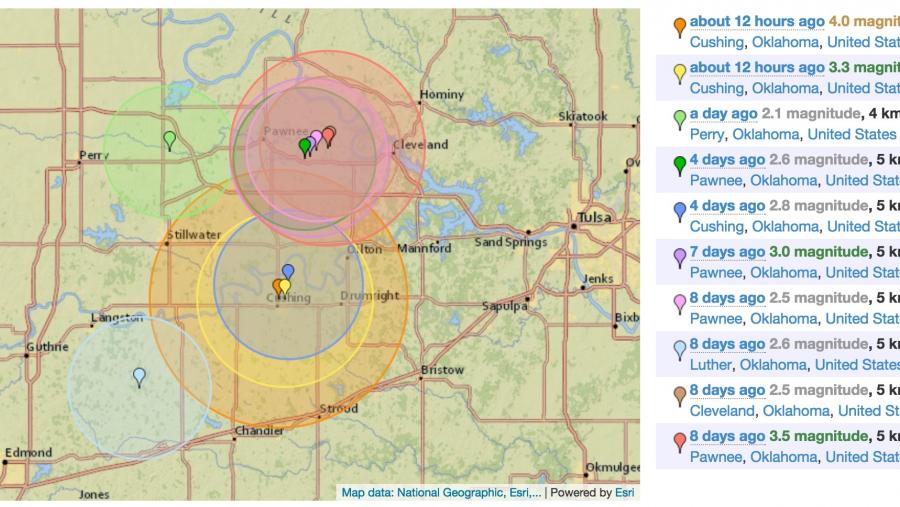 On August 9, 1967, a 5.5 magnitude earthquake struck Northglenn, a northern suburb of Denver, Colorado.

The Associated Press wrote that it was "the severest earthquake ever recorded" in the city's history. Building foundations cracked, windows broke, bricks flew off of downtown rooftops.

A year later in the prominent academic journal "Science," geophysicist J.H. Healy and his associates proposed that humans, not nature, were responsible for the quake.

"We attempt here to present the statistical evidence for correlating the two events -- fluid injection and earthquakes -- and to develop a hypothesis relating the two as cause and effect," Healy wrote.

The "fluid injection" Healy was referencing had been taking place two miles from Northglenn at the U.S. Army's Rocky Mountain Arsenal manufacturing plant. In 1961, the army drilled a "disposal waste well" through 2.2 miles of sedimentary rock, and had begun injecting it with contaminated industrial wastewater.

Seismic activity increased immediately, and then slowed after the army enacted an injection hiatus between October 1963 and August 1964. When the army started the injections back up again, the earthquakes followed. 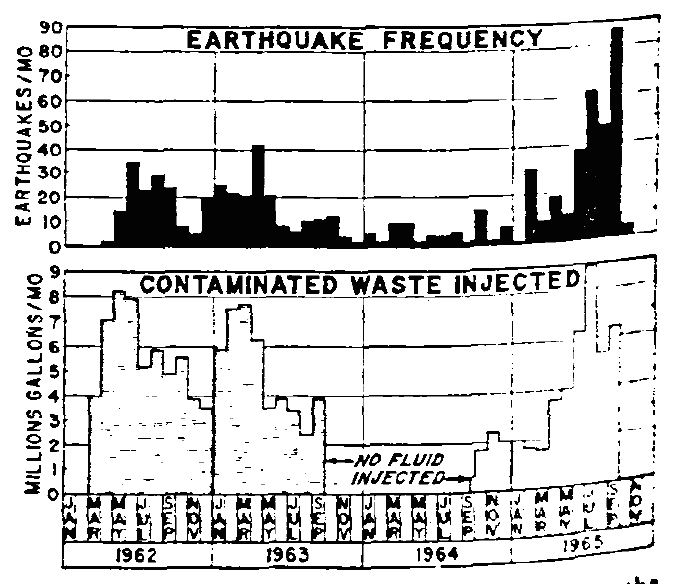 As years passed, Healy's analysis became common knowledge in scientific circles, in seismology and geology. It was proven scientifically that injecting millions of gallons of wastewater into the deep earth could induce seismic activity.

Fast forward to 2008, as the fossil industry began to expand rapidly through the use of hydraulic fracturing to drill wells in shale formations in states that had never been fracked before -- or had any significant earthquake activity in modern history.

In Texas, in 2008, there was a sudden spate of tremors near where injection wells were being filled with hundreds of thousands of gallons of drilling wastewater.

In upstate New York, in 2009, citizens expressed concerns about the sudden increase in earthquakes, worrying that the new seismic activity might be related to fracking.

In Arkansas in 2011, and in Ohio in 2013, similar surges in earthquakes were reported, and in each instance concerns about their connections to fracking were denied.

Some citizens, not being fully informed about what the industry knew, expressed their concerns by stating "fracking causes earthquakes," not realizing that it was the injection wells used by the fracking companies to dispose of fracked water that caused the seismic activity.

Fracking front groups like Energy in Depth and other industry shills used this imprecision to aggressively attack activists, all the while obscuring a broader truth: fracking "produces"/uses immense amounts of water that is often disposed of through "wastewater injection." And fossil fuel companies, staffed with geologists, have known for years that these injection wells can increase seismic activity, depending on geologic conditions and the volume of water injected.

In late 2014, the Center for Media and Democracy attended an energy industry conference as part of its research into fracking. At the conference, a presenter acknowledged that geologists have long understood the link between the injection wells used by the fracking industry and earthquakes.

The following chart, which reproduces Healy's chart, was shared at that meeting: 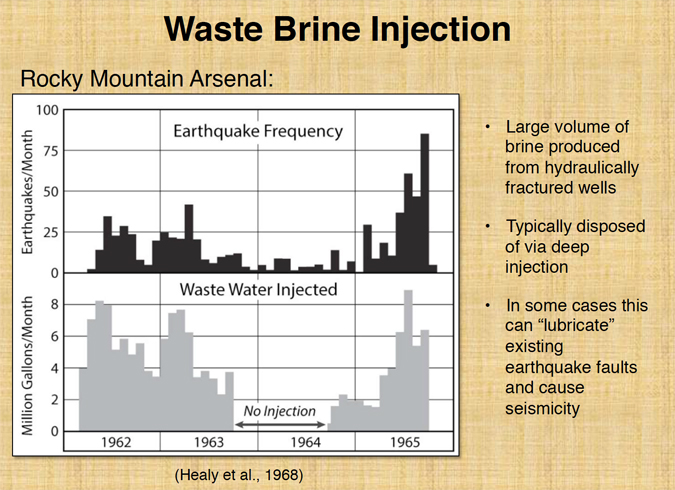 Scientific literature on the subject refers to "the classic case of injection-induced seismicity at the Rocky Mountain Arsenal," and countless academic papers cite the Healy paper as proof of human-caused earthquakes (out of hundreds of papers that cite Healy, the following were published in 1970, 1976, 1989, 1992 etc.).

Healy published his seminal article on induced seismicity in 1968, nearly fifty years ago. Yet, state agencies like the Oklahoma Geological Survey denied the connection between earthquakes and the fracking industry which was extensively using injection wells, until 2015.

The Earth Is Shaking And Shaking In Oklahoma

On September 3, 2016, at 11:26 p.m., a 5.8 magnitude earthquake struck Pawnee, Oklahoma. It was the largest recorded earthquake in the state's history, and was felt from Dallas, Texas to South Dakota.

Two months following the Pawnee quake, on November 6, 2016, another 5.0 magnitude earthquake struck Oklahoma, this time in Cushing, the renowned oil delivery hub and storage district. No less than 40 buildings were damaged.

According to one McDonalds employee working at the time of the quake, "It felt like a train was going right through the building."

Prior to 2009, Oklahoma was a typical, seismically inconsequential state in the "stable interior" of the United States, averaging roughly two earthquakes of 3.0 magnitude or greater per year.

By 2014, the state was more seismically active than California, and experienced 585 earthquakes of 3.0 magnitude or greater; in 2015, the total had jumped to 907.

Since 1882, there have been six earthquakes of 5.0 magnitude or greater in Oklahoma. Three of the six have occurred in 2016.

On April 21, 2015, the Oklahoma Geological Survey (OGS) issued a press release and revealed a new website, "Earthquakes In Oklahoma," that marked a massive public relations reversal for the state and its stance on induced seismicity.

In the press release, the OGS conceded it was "very likely that the majority of recent earthquakes, particularly those in central and north-central Oklahoma, are triggered by the injection of produced water in disposal."

Meanwhile, the new website, operated by the state's Department of Energy & Environment, contains a section on "Earthquake Preparedness" listing four steps residents can take to be "better prepared to survive" earthquakes.

Of Course There Was a Cover-Up, Spurred by Industry

The OGS public relations reversal occurred less than two months after the investigative journalist Mike Soraghan of E&E Publishing uncovered that the agency had been working with industry leaders to silence OGS scientists who had raised the issue of induced seismicity.

According to emails Soraghan obtained through open records requests, OGS scientists had begun making those connections in 2010.

The emails also show that in 2013 the state's corporation commission pressured the OGS state's seismologist Austin Holland to authenticate a scientific conclusion linking earthquakes to lake water levels, although he did not fully endorse the position.

"...My hand was forced on this matter," Holland wrote.

Most incriminatingly, the emails show that industry leaders -- particularly Harold Hamm, the billionaire founder and CEO of Continental Resources -- placed immense pressure on OGS to not discuss induced seismicity. Hamm even met directly with Holland in 2013 to talk the subject over.

According to the Oklahoma-based petroleum engineer Bob Jackman, when Jackman asked Holland why he was not making the obvious connections between fracking and earthquakes, Holland replied, "You don't understand -- Harold Hamm and others will not allow me to say certain things."

Hamm is currently a finalist under consideration for becoming the U.S. Secretary of Energy by president-elect Trump.

It Takes a Lot of Water to Cause an Earthquake

The dirty little secret of the fracking industry is just how much drinkable water the industry spoils every single year.

During a time of water scarcity permanently prolonged by climate change, the general public, many of whom are conserving water, are not aware that the fracking industry is taking staggering amounts of freshwater from streams, rivers and aquifers, is polluting that water through fracking, and then is often burying that polluted water miles underground in injection wells.

Unlike other industrial and agricultural practices, this process removes freshwater from the ordinary water cycle or the filtration or purification of groundwater and precipitation.

The fracking industry likes to downplay the role of its water use, citing comparative statistics that do not take the water cycle into account. But it is worth emphasizing that fracking operators do not simply use water, they disconnect it from the hydrological cycles that sustain agriculture, industrial development, and municipal living.

The numbers are astonishing.

It is a similar story in Portage County, Ohio:

"Nestled in the northeast corner of Ohio, about halfway between Cleveland and Youngstown, this 500-square-mile county pumped 2,358,371 million barrels -- almost 75 million gallons -- of fracking brine into 15 wells last year, driving enough liquid into the ground to fill a train of tanker cars that would stretch 37 miles. Most of the waste came from out of state. According to the Akron Beacon Journal, almost 58 percent of the waste injected into Ohio wells is trucked in -- much of it from Pennsylvania and West Virginia..."

This is how the fracking industry manages its waste, and it is the immense pressure that this waste places upon tectonic faults that induces the new wave of earthquakes witnessed across the country.

What Else Are They Lying About?

The fracking industry likes to argue that wastewater injection, not fracking itself, is the real culprit of induced seismicity.

Nonetheless, the rightwing media continues to churn out stories denying that fracking gas wells cause earthquakes without acknowledging clearly or openly that it is the fracking injection wells that are causing earthquakes.

This media and government manipulation by private industry has precedent.

Most noticeably, by the mid-1950s the tobacco industry was privately colluding about how to best manipulate the media, the government, and the public over the scientifically proven dangers of their product. Eventually, forty years later, it was through civil litigation that Big Tobacco faced its reckoning.

The fracking industry is already being challenged in the courts over their culpability for induced seismicity. It will be hard for the industry to fight these cases, but rest assured, they will try.

Although it is hard to imagine, there are actually greater issues at play for the industry and their culpability of harming the natural world than causing earthquakes.

Water, the basis of all life, is threatened by the fracking industry's contamination of drinkable water, as is the earth's atmosphere and climate that sustain all life.

We should remember, when analyzing claims by the industry and its apologists on these subjects, that they have lied before and that they will undoubtedly lie again.