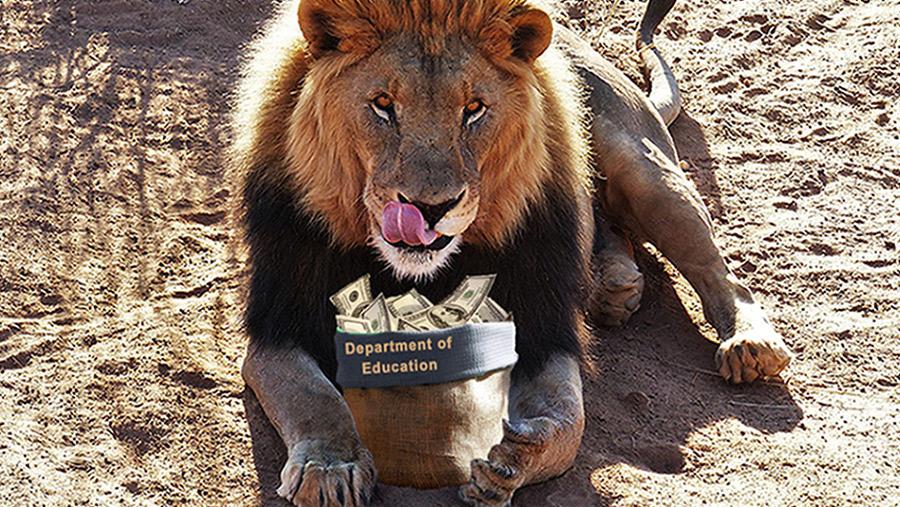 Politicians always promise they will rid government of "waste, fraud, and abuse," so let's hope at least one political leader or policy maker will denounce our federal government's new gift of nearly a quarter-billion dollars to charter schools.

The cash dump to charters, courtesy of taxpayers, is from the U.S. Department of Education. As Education Week reports, the money is going to eight states and 15 charter school networks from the Charter Schools Program, a federal government operation that doles out millions every year to start new charter schools.

This money is the latest installment of an over $3 billion gravy train the federal government has funded to help launch over 2,500 charter schools across the nation.

Regardless of how you feel about these schools, you should be concerned about how this new government outlay to charters will be used, based on the extensive track record of financial malfeasance in these schools.

Indeed, shortly after the USDE announcement, the Department's own auditor warned that the money is very much at risk of ending up in the pockets of fraudsters and con artists rather than in the classrooms of diligent students and dedicated teachers.

Again Education Week reports, the audit by the agency's inspector general's office examined 33 schools in six states and concluded that because of a general lack of oversight of charters there was a "risk that federal programs are not being implemented correctly and are wasting public money."

The risk stems from the "cozy relationships," the EdWeek reporter's words, between charter schools and companies that operate them, called Charter Management Organizations (CMOs).

Of the 33 charter schools the audit examined, 22 had examples, sometimes multiple examples, of how CMOs take advantage of the unusual business relationship they have with their client charters to exploit federal education funds and redirect precious taxpayer dollars to private interests that have nothing to do with education.

In one of the more egregious examples the audit round, "the CEO of one CMO in Pennsylvania had the authority to write and issue checks without charter school board approval and wrote checks to himself from the charter school's accounts totaling about $11 million."

In Florida, a charter and a CMO that shared the same board entered into an expensive lease agreement for the school building, then expanded the facility, extended the lease, and increased the rental payments to the CMO.

One CMO the audit examined, which operated three charters in Michigan and one in New York, required the charter schools to remit all federal, state, and local funds to the CMO and gave the CMO total responsibility, with no oversight by the charter board, for paying school expenditures.

The auditor's report doesn't provide the names of these schools, so we don't know if they have received federal grant money in the past or are some of the ones getting the new money.

However, three of the six states the audit looked at – California, Texas, and Florida – are the same states the Department of Education just decided to send more money to. The other three – Michigan Pennsylvania, and New York – have received federal money for charters in the past, either sent to the state or to charter organizations operating in the state.

The federal auditor's revelations on charter school waste, fraud, and abuse is yet another dose of reality in a long line of factual reporting about these schools.

A study released last year by the Center for Media and Democracy found "charter spending is largely a black hole." That's because the "flexibility" charters have been granted by the government is often being used not to create education innovations but to "allow an epidemic of fraud, waste, and mismanagement that would not be tolerated in public schools," the CMD report found.

Based on its extensive research on charters, CMD examined the list of new award grantees and noted Florida, that's getting a grant of $58,454,516, has closed over 120 charter schools in a little over a decade. Texas, which is getting $30,498,392, has "an unknown number" of charter schools "housed in churches" and "closely tied to, religious groups."

Tennessee, which is getting $15,172,732, is famous for having a statewide online charter school that is so bad, the state education chief tried to get rid of it but couldn't because of political maneuvering by the charter lobby and lack of regulatory accountability.

California, which is getting $27,329,904, has some of the worst charter school scandals in the nation, according to a report from the Center for Popular Democracy, which uncovered over $81,400,000 in fraud, waste, and abuse in the state. CPD call the alarming figure "likely just the tip of the iceberg."

Louisiana, another grantee getting $4,836,766 from the feds, has been ripped off by "tens of millions of dollars in undiscovered losses" from charter schools in the 2013-14 school year, according to another CPD analysis. "The state has insufficiently resourced financial oversight," CPD contends, and has yet to put into place adequate reporting, staffing, and auditing.

Three other states – Georgia, Massachusetts, and Washington – are getting the money just when they are deeply embroiled in heated controversies over charter schools.

Georgia has a ballot initiative in November on whether to allow the state to operate an Opportunity School District that would summarily take over local schools and hand them over to charter operators. Massachusetts also has a November ballot initiative, called Question 2, that would allow the state to lift the cap on the number of charters allowed to operate in the state. And in Washington, a charter school battleground for over 20 years, court rulings, legislative shenanigans, lawsuits, and counter lawsuits related to charter schools continue to rage across the state.

No doubt, this new money – over $41 million altogether for these three states – may now sweeten the pot if pro charter forces get their way.

Regarding the individual CMOs the Department is sending money to, one of them, Uncommon Schools, is a charter chain which used to be led in part by the current head of USDE, Secretary John King. Uncommon is getting $8,004,576. No conflict of interest there.

Another recipient – the Denver School of Science and Technology charter chain in Colorado, with a grant of $4,043,361 – has paid out between $20 to $50 million to a for-profit corporation owned by two of the charter chain's director, according to another CPD analysis.

A charter school chain in Indiana getting $1,923,866 is plagued with financial problems, low enrollment, and controversy over how the CEO spends money. No doubt the infusion of federal cash will help.

The federal auditor's report recommends the convening of a formal oversight group to look into charter school financial malfeasance, more rigorous review of charter school operations by federal agencies, and legislative changes in Congress to firm up government oversight.

Here's another recommendation: Stop federal funding to expand these schools.

If you can help by signing our petition and bring awareness, please do: http://www.ipetitions.com/petition/TVLC-Audit