The Independent "Women's" Voice? Most Known Donors Are Men 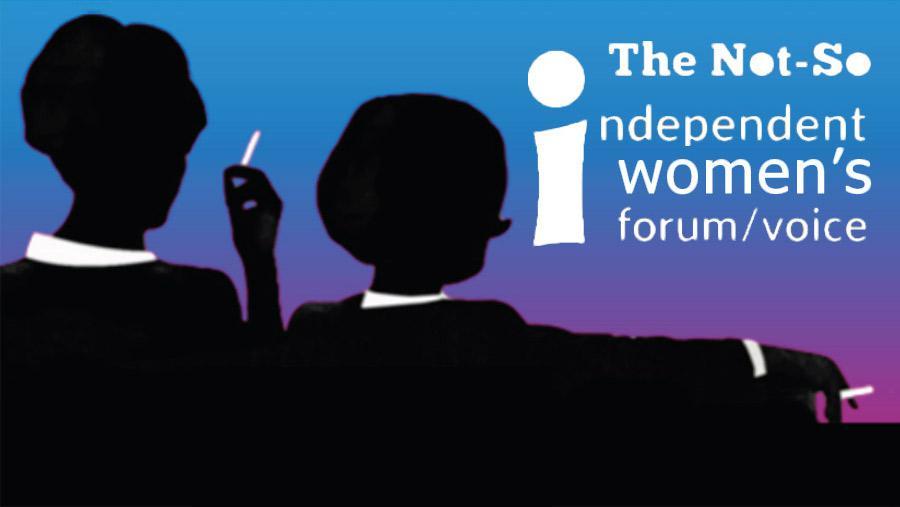 But is it even women's voices it is throwing? Let alone independent women?

The reported data from the Federal Election Commission data says no.

New research shows that the overwhelming majority of its known donors are men.

Yes, men have provided most of the disclosed donations to fund election-related expenditures under the name of the "Independent Women's Voice."

(IWV is a (c)(4) that operates out of the same offices as the Koch-tied "Independent Women's Forum.")

How do we know? Because IWV disclosed donors to the FEC in connection with the Scott Brown special election for the Senate in filings here and here.

Because before the U.S. Supreme Court invalidated clean election reforms in the Citizens United case in 2010 along with related decisions, IWV took a different approach to disclosure.

In January 2010 in that spending, IWV reported that more than 89% of its donors were men.

Late last year, Heather Higgins, the President of IWV, told potential donors about the first race she deployed her strategy to use the "independent" brand: the race to fill the seat of the late Senator Ted Kennedy.

She said: "[W]e have worked hard to create a branded organization that does not carry partisan baggage. It's called Independent Women's Voice. Being branded as neutral, but actually having the people who know know that you're actually conservative puts us in a unique position. Our value here (and what is needed in the Republican conservative arsenal) is a group that can talk to those cohorts that wouldn't otherwise listen but can do it in a way that is taking a conservative message and packaging it in a way that will be acceptable and will get a hearing."

She noted that the "independent" brand of IWV was successful in the politically diverse state of Massachusetts in 2010.

Higgins added that in Brown's election, IWV was successful "redefining that as being about healthcare in the 41st vote" to filibuster the health insurance reforms that President Obama was seeking. She claimed that IWV helped "close his 20‑point gap" with his opponent, Martha Coakley, a Democrat.

But who really funded that effort?

The largest reported funder of the Independent Women's Voice that January was Foster Friess. He gave $87,000 to the effort, nearly 33% of the funding.

The 73-year old investment fund manager describes himself as a "billionaire wannabe" because he has a net worth of only about $500 million.

And, he's no independent.

Friess gave at least $1 million to advance the Koch Brothers' agenda, making that pledge at one of their political strategy session in preparation for the 2012 elections.

The billionaire wannabe has spent at least $3 million to underwrite the Daily Caller operation. It provides daily fodder for Donald Trump's claims. And the Trump operation pays Daily Caller to email its subscribers to promote his presidential campaign.

And, he's no feminist.

Friess told journalist Andrea Mitchell his position on birth control: "[T]his contraceptive thing, my gosh, it's so ... inexpensive, you know, back in my days, they used Bayer aspirin for contraception. The gals put it between their knees and it wasn't that costly."

But he does have close ties to Higgins. She contacted Friess to get funding to begin James O'Keefe's controversial campaign against ACORN.

He threw his voice (money) through IWV in the Scott Brown race for the Senate.

The next largest donor to the Independent Women's Voice for the Scott Brown effort was also not a woman and not an independent.

Richard Sharp gave Higgins $50,000 to help, which was almost 22% of the funding IWV reported that January.

Sharp, the former CEO of Circuit City, helped develop CarMax and invested first in Crocs, according to his obituary in 2014.

He was also an active Republican backer of President George W. Bush.

He notoriously tried to use his influence "to suppress a study ... that correctly predicted that [Virginia's GOP Governor] Gilmore's car-tax rollback would create a $1 billion hole in the state budget."

Dr. John (Jack) M. Templeton, Jr., was the next largest disclosed donor to IWV underwriting its efforts to help Brown beat Coakley in her bid to become the first woman Senator of the Bay state.

Dr. Templeton was the son of billionaire investor John Templeton, one of the richest men in the world before his death in the Bahamas.

In 2008 alone he gave nearly half a million dollars to the National Organization for Marriage, which fought marriage equality in Massachusetts and spent big on California Proposition 8. Regulatory agencies have pursued the group for failing to comply with requirements for private disclosure of donors.

NOM has been called an anti-gay group that demonizes LGBTQ Americans. And, internal documents revealed that one of it's goals was to divide black Americans over gay rights and to "to 'sideswipe' President Barack Obama by depicting him as a 'social radical' via issues including child protection and pornography."

Dr. Templeton also spent a million dollars launching "Let Freedom Ring," a right-wing group that helped launch the Tea Party protests, pushed for a huge fence between on the Mexican border, and promoted myths about the Iraq War.

Like the most of the disclosed donors to IWV, he was not ever a woman, and he was not independent.

The next largest donor to IWV was Thomas Patrick.

He's a former Merrill Lynch executive, who joined a venture capital firm: New Vernon Capital. He has appeared on the show of Higgins' ally, Larry Kudlow.

He backed Mitt Romney's bid for the White House in 2012, was a major donor to Bush-Cheney 2004, and has funded the National Republican Congressional Committee and other GOP-aligned groups.

Patrick, like the other bigger donors, is not a woman and not an independent.

One woman did give about 10% of the funds to help IWV in the Scott Brown effort: Randy Kendrick.

As noted by the Arizona press, she is "in a league of her own in her support for the political right, giving more than $130,000 to state political efforts in the 2014 election cycle, according to the Arizona Secretary of State's Office, and, at the federal level, more than $290,000 to Republican candidates for the U.S. Senate and U.S. House of Representatives and other conservative political action committees, according to the non-partisan Center for Responsive Politics."

She's a lawyer who has been active in the Koch billionaire network, working with Higgins to help launch Sean Noble's controversial money shuffling operation, the Center to Protect Patient Rights (which has been renamed American Encore).

Although she is a woman, she is not an independent. She is very active in federal and state GOP activities, although she opposes Trump along with some other "conservative" Republicans.

The other remaining four donors to IWV in January 2010 gave less than 10% to the effort cumulatively.

Tom Klingenstein, who has been the managing partner of an investment firm that shares his name, gave $10,000 (4%). Klingenstein describes himself as a "conservative," and he is not a woman.

Ron Gidwitz gave $5,000 (2%). The Illinois press has described him as "easily the Illinois Republican Party's most consistent contributor, fundraiser and cheerleader, dating back four decades when he was finance chair for Rep. Henry Hyde." Again, he is not a woman or an independent.

Myles Pollin gave $1,000. He practices law as a partner with the big firm Sidley, focusing on "Collateralized Debt Obligations" (CDOs) and distressed assets, like those discussed in the film "The Big Short." He helped raise funds for Romney in 2012. He, too, in not an independent woman.

Giovanna Cugnasca wrote that check. She's a Vice President at Emcor Securities in New York. The year after that donation, she joined the board of the Independent Women's Forum, which Higgins chairs.

Cugnasca has made a number of political contributions to GOP candidates, including to Republican U.S. Senate candidate Richard Mourdock, before his controversial comments about rape, pregnancy, and "God's will." She has also donated to the campaigns of Mitt Romney, Rick Perry, and Allen West.

None Were from Massachusetts

In all, more than 89% of the reported donations to IWV in January 2010 when it was working to help Scott Brown win a seat in the Senate were made by men. And the two women whose donations constituted a small minority of the funding have been GOP donors, not donors to "independent" candidates.

And none of those IWV donors even resided in Massachusetts.

The only other FEC reported donors to IWV under Higgins' control occurred in late 2011.

Again, the majority of disclosed donors were not women, as shown here and here.

In September and October of that year, the group disclosed six donors. Two of whom are women whose donations constituted a minority of the funding.

The largest donor was a group called "One Jerusalem," which was founded by 18 people, three of whom are women.

Its founders included David Horowitz, a right-winger and friend of Higgins; some famous Rabbis; a movie star; and the comedian Jackie Mason. It held a huge rally in Israel in 2001. One Jerusalem, as its name indicates, focuses on maintaining Jerusalem as an undivided capital of the country.

Parker Collier, an active donor to the GOP and the wife of a Florida real estate investor, gave $29,060.69.

Virginia James, a wealthy investor who lives in New Jersey and an active donor to GOP candidates (like Richard Mourdock), gave $10,000.

James is also a major donor to right-wing groups that run ads to influence elections to help Republicans, like Club for Growth and Templeton's Let Freedom Ring.

The other disclosed donors were Pollin, the law firm partner, $3000; Donald Tober, the Chairman of the Sugar Foods Corporation, $1000; and Lewis van Amerongan, a wealthy investor, $1000.

And, none of them appear to be from people who are politically "independent."

Indeed, all of them, other than the one foundation, are active GOP donors.

What Now for the Independent Women's Voice?

Since the change in the interpretation of FEC reporting requirements, there is no comparable public snapshot of who has underwritten other ads and election-related activities of IWV

But that fact did not deter IWV from posing as the voice of independent women in the Brown election, even though most of its donors for that effort were wealthy Republican men.

So, will IWV disclose who has been bankrolling its efforts to be an asset in the "Republican conservative arsenal" since then?

If a majority of its documented donors actually are women and actually are independent that would be newsworthy.

This snapshot of the known funding reported to the FEC tells a different story, as Heather Higgins launched this chapter of IWV's activities to influence the results in American elections.

Furthermore, part of Higgins' pitch last November at the David Horowitz event was for men to fund the election activities of IWV: "So for the men in the audience who think that the last thing they want to do is support a women's group, understand that if you have any interest in … winning elections you have to think of this as a market segmentation issue and you can't leave out that part of the market if you want to win."

Therefore, the real question is: when IWV "speaks" to influence our elections, is it really just throwing the voice of billionaire wannabees like Foster Friess or of actually independent women?

The public evidence shows it's a man's world, masquerading as the voice of independent women.