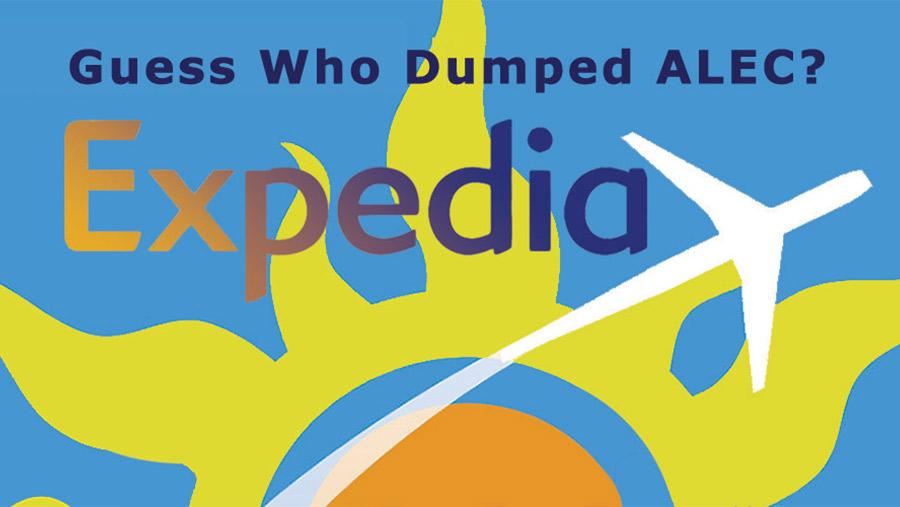 The Guardian is reporting that the online travel company Expedia has dumped the American Legislative Exchange Council (ALEC).

The Center for Media and Democracy has been flagging Expedia's financial support for ALEC and asking activists if they are using Expedia-connected hotel and air travel booking services.

In an email to Common Cause, Expedia "confirmed it had severed ties" with the corporate bill mill.

This news comes less than a week after AARP announced that it would leave ALEC after CMD broke the story that the seniors group was a member and funder of the ALEC with its pay-to-play meetings.

Expedia is a global player in the online travel business with over $50 billion in sales in 2014.

Expedia also owns many of the other major players in the online travel marketplace including: Hotels.com, Orbitz, Trivago, Travelocity, Hotwire, and CarRentals.com. This is only a sample of the 200+ travel booking sites in over 75 countries that Expedia currently operates.

It is unclear whether Expedia funded ALEC as a one-stop shopping for state legislators to aid its corporate lobbying agenda or if there were specific bills Expedia's lobbyists were backing through ALEC.

Expedia has stated in its mission that its leaders "believe in the scientific method." Its namesake travel site in the U.S. offers a Green Travel Guide which tells customers that "Expedia is committed to to creating green travel initiatives that address environmental and social concerns."

But, these statements conflict with ALEC's promotion of climate change denial and campaign to spread disinformation on the crisis affecting our planet. Despite ALEC's role in thwarting efforts to try to mitigate climate change and promote conflicting claims like an increase in carbon dioxide is good for you or that the earth's climate is cooling, the science is clear, the "Earth's climate is warming."

Expedia and ALEC were also on opposite sides of the net neutrality debate in 2014. Expedia supported an "open internet" while ALEC called net neutrality rules an "inflated regulatory burden."

At the Netroots Nation 2016 conference in St. Louis in July, CMD expanded its efforts to help citizens encourage Expedia to dump ALEC through a postcard campaign. The postcards were mailed to Expedia's CEO Dara Khosrowshahi and Chairman Barry Diller.

Expedia joins AARP, Google, General Motors, General Electric, Walmart and more than 100 other corporations that have dumped ALEC since CMD launched ALECexposed in 2011, connected the dots between ALEC and the Stand Your Ground legislation, exposed ALEC's role in fueling climate change denial, and documented how ALEC's pay-to-play operations corrupt the American legislative process.