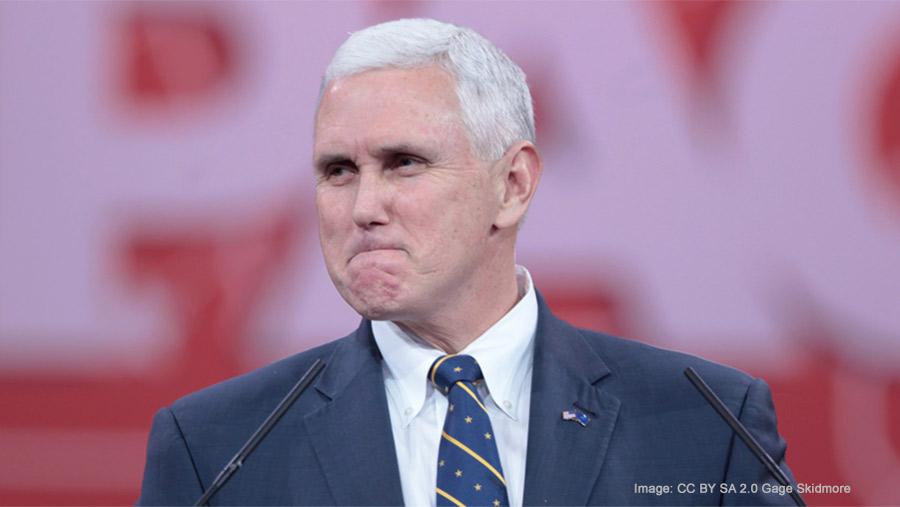 By Jessica Mason and Lisa Graves

The American Legislative Exchange Council will push bills to protect failing charter schools, silence political speech, and obstruct environmental protections in the ALEC 2016 agenda introduced at its annual meeting in Indianapolis this week.

ALEC faces renewed public attention as it gears up for the annual meeting, where corporate lobbyists sit side-by-side with state legislators in luxury hotels to vote as equals on "model bills" that then get pushed to become law in states across the country.

As the Center for Media and Democracy has reported, Donald Trump chose an ALEC ally, Indiana Governor Mike Pence, as his running mate, while his party's 2016 platform was clearly stamped in the Koch-fueled ALEC mold.

As Governor, Pence appointed an ALEC staffer to his cabinet, and pushed parts of the ALEC agenda into law, such as anti-worker bills like repealing the prevailing wage and privatizing public schools in various ways. He even sent a letter to state legislators urging them to join ALEC, which is widely described as a corporate bill mill. ALEC is funded by Koch Industries, Peabody Energy, huge global tobacco and drug companies, and other corporations that pay a premium to access ALEC lawmakers.

Conveniently for him, this year's meeting will be held in the snazzy J.W. Marriott in downtown Indianapolis. Pence is scheduled to deliver a keynote address at lunch on Wednesday, then is slated to speak at an evening reception on school "reform" jointly hosted by the Center for Education Reform (CER) and the Jack Kemp Foundation (JKF).

If Pence had time to stay for a few task force meetings, here are some of the new "model bills" he would find voted on behind closed doors by ALEC legislators alongside corporate lobbyists and representatives of special interest groups that are part of the State Policy Network (SPN).

The for-profit education companies that help fund ALEC, like K12, Inc., have a track record of poor results that tends to result in a high rate of school closures. K12, which was founded in part by junk bond fraudster felon Michael Milken, has a seat and a vote on ALEC's corporate board.

Two new bills being considered by what ALEC now dubs its "Education and Workforce Development Task Force" could help poorly performing charters stay open without having to improve.

Under the Assessment Choice Act, instead of using a uniform assessment for students statewide, charters' authorizers would take their pick from a "menu" of tests, unlike traditional public schools.

If propping up test scores isn't enough to save a charter from closure, the "Student and Family Fair Notice and Impact Statement Act" promises to add new hurdles. Before closing or restructuring a charter school, this act would not just require that families be notified. It would also create a public hearing process in which parents, teachers, and "experts" could give testimony about the school, and the charter board would be allowed to suggest a response plan.

In case it wasn't obvious that the bill is meant to keep the charter in operation, the drafter of that model bill added:

"[drafting note: it should be clear the school can present an alternative for supporters of the school to rally around.]"

School privatization proponents have slowly been dropping the pretense that the "school choice" movement is about helping underprivileged children. At a workshop titled "The Path to Universal Choice: From Theory to Passage to Implementation," lawmakers will be schooled on how to "open up more options to the middle class."

While ALEC purports to support "limited government," its bills show that is code for unlimited corporate power, even from democratic control by stockholders.

For example, ALEC bills have leveraged right-wing ALEC control of state legislatures to try to stifle political movements that are winning the battle for public opinion, as CMD has previously reported in its coverage of ALEC's preemption strategy, among other areas.

This ALEC meeting includes a proposal opposing the Boycott, Divest, and Sanctions Movement (BDS), which has been growing in strength, especially on college campuses.

The BDS Movement is an international campaign to use economic pressure to push the state of Israel to end its occupation of Palestinian territories and to allow Palestinian refugees the right of return to their homes.

While a healthy public debate is ongoing about the pros and cons of BDS, ALEC's proposal as described doesn't merely express opposition to the movement. Instead, it apparently aims to silence political speech and activity:

"The goal of the resulting model policy will be to create disincentives to engaging in (and prohibit to the extent possible) secondary boycott activities."

ALEC host Indiana and a handful of other states have passed similar anti-boycott bills, which the American Civil Liberties Union has criticized as unconstitutional limits on speech.

This is all par for the course for ALEC, which opposed anti-Apartheid sanctions, as CMD's Nick Surgey uncovered with Calvin Sloan. ALEC has long opposed citizen stockholder movements to urge socially responsible investing.

Undaunted, ALEC's "Commerce, Insurance and Economic Development" Task Force is presenting a combined version of its long-standing "Right to Work" Act and Public Employee Choice Act. The new version has been re-branded the "Friedrichs Public Employee Freedom Act" to try to get more mileage from the case. Its namesake Rebecca Friedrichs is a photogenic school teacher and rightwing activist who tried to pave the way for free-riders to get out of union dues. Friedrichs herself is an invited speaker at the conference.

To advance this agenda, the task force meeting will hear just from proponents at a presentation titled, "A State Strategy to Protect Public Employees' Free Speech Rights in the Wake of Friedrichs v. California Teachers' Association." The presentation will likely unfold the next steps of ALEC's Koch-y anti-union strategy.

ALEC has long relied on funding from its coal and oil industry members. It is also a key cog in the climate science denial machine.

This year its "Energy, Environment, and Agriculture" Task Force is proposing yet another resolution opposing the Clean Power Plan (CPP). The CPP takes important steps toward reducing carbon pollution from coal power plants that are contributing to climate changes underway.

Another proposed resolution attacks a new EPA rule to protect American streams—and along with them American families and wildlife—from dangerous pollution caused by surface coal mining.

Mimicking ALEC's "guerilla warfare" strategy against the CPP, the resolution calls on state attorneys general to actively oppose the rule. ALEC, whose focus has long been legislators, has been increasingly coordinating with top law enforcement officers to thwart an array of legislation, including the CPP and the Affordable Care Act.

As Long as ALEC Is Amending the Constitution. . .

As CMD has previously detailed, one of ALEC's top priorities in recent years has been calling to amend the U.S. Constitution with a balanced budget requirement. Such an amendment would straitjacket the federal government's ability to respond to crises, opportunities, and economic downturns.

Now that the movement may be getting close to the numbers needed to call a constitutional convention under Article V. One estimate counted 28 states of the required 34 having passed resolutions. It looks like ALEC's "Federalism and International Relations" Task Force is piling on to make the most of the opportunity.

A presentation on a "Congressional Term Limits Amendment" underscores the potential dangers of the Article V strategy that some have expressed. That's because it appears that any change could be made to the Constitution during a convention (just as the entire Articles of Confederation were scrapped at the last Constitutional Convention in 1787).

It's clear that some proponents see it as an opportunity to tack on a wishlist of right-wing policies without oversight or accountability, based on pre-selecting who gets a vote at such a convention.

An Updated ALEC Agenda for Big Pharma and "Home Sharing"

Drug companies are a perennial favorite at ALEC. Representatives of Pfizer and the Pharmaceutical Research and Manufacturers of America trade group have seats and votes on sit on ALEC's private sector board. A Takeda lobbyist is the "private sector" chair of the "Health and Human Services" Task Force.

The "Federalism and International Relations" Task Force is considering a resolution against Canada's "Promise Doctrine," which requires that a patent applicant actually demonstrate the utility of an invention before being awarded a patent.

ALEC's "Communications and Technology" and "Tax and Fiscal Policy" Task Forces are pulling out the preemption playbook for "home-sharing" operations like Airbnb and HomeAway. HomeAway is a member of the trade association NetChoice, which has a seat and a vote on ALEC's private sector board.

As the hotel alternatives cut into tight housing markets, cities like San Francisco and Phoenix have been experimenting with local rules to ensure the businesses comply with safety and tax rules, and to keep big investors from tying up residential housing.

Corporate Lobbyists Get a Vote on "Tort Reform" Bills

The "Civil Justice" Task Force continues to focus on helping corporations escape liability and the costs of worker injuries. Meeting behind closed doors, the task force includes some of the defense lawyers who represent corporations whose products or practices injure Americans, who will vote as equals with state legislators on bills.

On the docket this meeting is an amendment to ALEC's Statement of Principles on Workers' Compensation Reform. The task force will also hear a presentation on "Sports Industry Liability: Helmets, Concussions and Medical Duties."

Uncoincidentally, the National Athletic Trainers Association will also be welcomed as a new member of the "Health and Human Services" Task Force at the Indianapolis meeting.

Legislators rubbing elbows with so-called "tort reform" lobbyists will be told about "Lawsuits in the Age of Big Data: Bringing Discovery Reform to the States." A presentation titled "The Threat of Groupthink in Jury Decision-Making" will teach them about perceived problems with the democratic check on the criminal justice process, the right to a trial by jury.

ALEC's project, the American City County Exchange, is ostensibly meant to be a municipal version of ALEC.

ALEC reliably leans on rhetoric about local control in its opposition to federal policies. But ACCE's "model bills" are strangely bifurcated between seizing and abandoning local power.

Yet ACCE just as often urges municipalities to turn decision-making power over to the states. This is likely because cities are at the forefront of progressive policy-making, as with the incredibly popular efforts to raise the minimum wage and expand access to earned sick days. Indeed, as CMD documented, most CEOs support those measures by overwhelming majorities, even though business lobbies routinely claim companies oppose such legislation.

ACCE's Ordinance to Repeal Personal Property Tax Collection would interfere with cities like San Francisco, which is experimenting with ways to tax property in short-term HomeAway-type rentals similarly to hotels.

ACCE's Local Resolution in Support of State Minimum Wage Law even urges city officials to claim that the "do not have the authority" to set minimum wages that are appropriate to the conditions in the cities they were elected to represent.

Such efforts are part of ALEC's larger pre-emption playbook, which dates back to its efforts to help the tobacco companies funding it and the gun industry trade groups fueling it thwart progressive city policies to address the deadly harms of inherently dangerous cigarettes and guns.

Four years ago, CMD connected the dots between the Koch-backed ALEC and the Stand Your Ground legislation that initially prevented the arrest of George Zimmerman—and ultimately prevented his conviction—for killing Trayvon Martin. Under public scrutiny, ALEC announced it was parting ways with the NRA.

ALEC is hosting another shooting range event this Saturday.

Like ALEC, Mike Pence has cast his lot with industry, peddling deceptive claims like smoking doesn't cause cancer and opposing laws to reduce gun violence.

It should come as no surprise that he has also claimed that climate change is "a myth," just as ALEC has preached to its legislators numerous times over the years, as it has been funded by Exxon, Koch, Peabody, and other climate change denial operations.

Follow @PRWatch, @ALECexposed, and ExposedbyCMD.org for updates during ALEC's meeting this week.