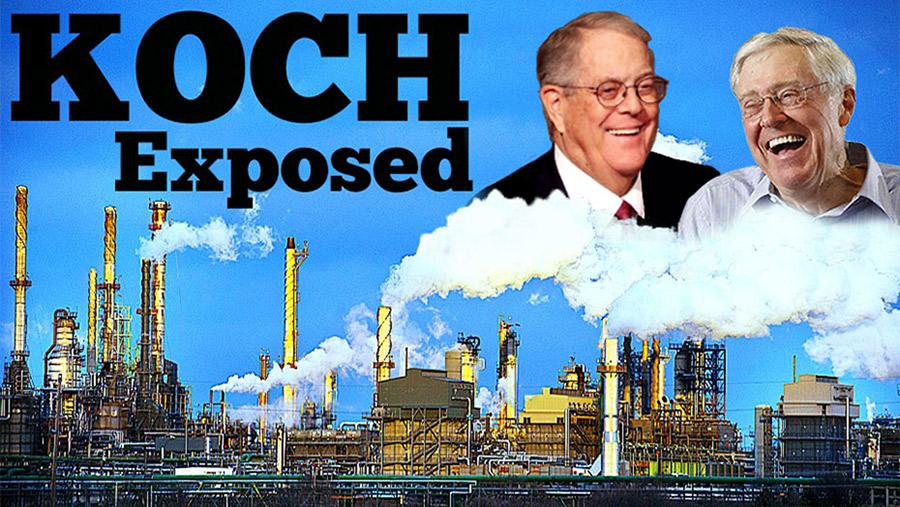 As Congress considers major criminal justice reforms to address the devastating impact of gross sentencing disparities that have devastated minority communities, the Koch machine is seeking changes to the law that would benefit Koch Industries and other corporations by limiting their criminal liability, as the Center for Media and Democracy documented in 2015.

But that's not the only part of the agenda of the billionaire Koch brothers' network that is in play.

Few policymakers understand the role the Koch-funded "think tanks" like the Texas Public Policy Foundation and its "Right on Crime" operation have played and are playing in the privatization of the criminal justice system, including in the area of "re-entry," a term of art for how people who have served their sentence re-enter society.

In the Koch world of free market fundamentalism, there is always a way for corporations (and academics) to get a piece of the pie; that is revenue flowing from American tax dollars to enrich private interests.

Charles Koch's oft-deployed rhetorical device of railing against "crony capitalism" as a foil distracts from the real world impacts of the long-standing Koch privatization push, which is grounded in hostility to government and born of the anarcho-capitalism he first embraced more than five decades ago.

No matter what name they artfully deploy, what Charles Koch has schemed for half a century to accomplish, what his brother David Koch ran on in 1980, and what they continue to pursue through an array of front groups is anarcho-capitalist policies dressed up as "freedom" or "prosperity," as with the latest part of their multi-million dollar PR volley, which asserts that the divisive Koch billionaires are unifiers who want to "end the divide."

Though their army of doctrinaire politicians and acolytes invoke the phrase "limited government," the means is almost always the same: taking away power from public institutions—that is, from the institutions created through a democratic process to serve the public—to private entities that are not democratically accountable and whose core objective is not providing the public with services but rather is profiting from public dollars.

The flip side of the Koch brand of limited government is almost unlimited corporate power.

Reentry is just one more venue for the redistribution of wealth from shared public institutions to outsourcing yet another component of the criminal justice system to the private sector from the public sector.

If the advent of the private, for-profit prison system is any guide, public tax dollars will be subverted to enrich corporations putting profits over the people in the system and to use to lobby for more of the same.

Prison privatization is yet another free marketeer scheme embraced by the Kochs' Citizens for a Sound Economy, the predecessor of their Americans for Prosperity arm, as well as the Koch-fueled American Legislative Exchange Council (ALEC), the pay-to-play stealth lobby group that operationalized it through the state legislatures.

If there is money to be made keeping people under surveillance after they finish their prison sentence is there any doubt there will be more lobbying for more funding, under the guise of public safety?

After all, that's part of the reason the American Bail Coalition (ABC) stuck with ALEC and its reinvented "Public Safety and Elections Task Force" that was redubbed the "Justice Performance Project" after ALEC disbanded the task force in the wake of CMD connecting the dots between it and the proliferation of so-called "Stand Your Ground" laws and efforts to make it harder for Americans to vote in elections.

ABC and its allies in sureties, which help lead ALEC's American City County Exchange (ACCE), appear to see opportunities in funding ALEC, with its "reforms" like the "Right on Crime" package with its support for the privatization of probation and parole, through "re-entry" programs and more.

So, it is with deep appreciation that CMD is publishing a new Special Report by Ralph Wilson, which examines the expansion of privatized re-entry through the lens of tracking Florida's very small and Koch-connected world of "reformers."

It is unclear what true reforms would prevent the kinds of corruption that privatization of key elements of the criminal justice system has spawned.

What is clear is that policymakers who want to redress the crisis of over-incarceration should be considering how best to preserve the public interest in criminal justice reform that strengthens publicly accountable institutions.

We should be mindful that needed reforms not be used as a vehicle to redirect precious tax dollars away from government institutions in ways that fuel new and powerful special interests that then push for more of the public's tax dollars to be redirected to create enormous revenue streams for both for-profit and non-profit entities in ways that ultimately do not put the interests of the public first.