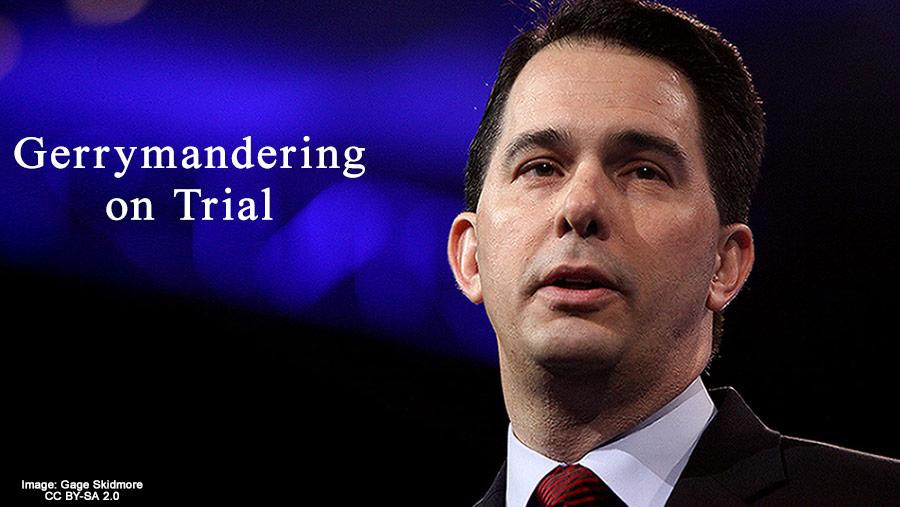 A case that advocates hope could go up to the U.S. Supreme Court and set a new standard against partisan gerrymandering is being heard in federal court in the U.S. District Court for the Western District of Wisconsin this week.

A group of Democratic Wisconsin voters are suing the State of Wisconsin, arguing that the legislative district maps drawn by GOP politicians in 2011 are so skewed and long-lasting that their voting rights were violated.

The lawsuit challenges 2011 Act 43, which redrew Wisconsin state legislative boundaries after the 2010 Census. The maps were redrawn behind closed doors at the law firm of Michael Best & Friedrich by GOP aides in a process a federal court previously described as a "shameful" attempt to hide from public scrutiny. GOP legislators signed secrecy oaths, thousands of files were destroyed, computers were confiscated and found to have been tampered with.

At today's hearing, Stephanopoulous described how GOP aides relied upon experts and sophisticated statistical analyses to pack districts, so they increasingly skewed Republican. Multiple draft maps were produced and run by Political Science Professor Roland Keith Gaddie of the University of Oklahoma, who carried out "sensitivity testing" for Act 43.

"We found 10 separate draft plans analyzed by spreadsheets. The only reason to carry out this testing is to ensure that the gerrymandering is durable," said Stephanopoulous.

Unlike gerrymanders of old, which looped in broad geographical areas and presented highly distorted maps, this new, high-tech method helped the GOP create districts that appeared aesthetically pleasing, but skewed redder and redder in draft after draft. Memos on the maps were prepared for individual GOP legislators, but not for Democratic legislators, who were entirely excluded from the process until the day of the vote.

Tad Ottman, who worked for Senate Majority Leader Scott Fitzgerald and who played a key role in the redistricting, told Republican legislators at the time that "We have an opportunity and an obligation to draw these maps that Republicans haven't had in decades," and "the maps will determine who is here 10 years from now." Ottman is expected to testify tomorrow.

The state "will not be able to show that this process was in the interest of all the people in the state of Wisconsin," argued Stephanopoulous.

Republicans disregarded traditional county and city boundaries that are normally used to draw districts. "Act 43 splits 58 counties even though county boundaries are supposed to be respected." For the first time, gerrymandered maps were used to draw wards, when previously wards had been used to draw maps. Memos and draft maps were prepared for review by individual Republican legislators, but Democratic legislators were entirely excluded.

Whereas the previous case focused on the impact of the redistricting on minority populations and forced the redrawing of two districts in Milwaukee, today’s suit focused on what plaintiffs allege was a "deliberate, severe, durable, unjustified gerrymander."

In response, Wisconsin Assistant Attorney General Brian Keenan argued that plaintiffs were presenting a "radical redefinition" of gerrymandering and that "traditional gerrymandering" meant strangely drawn districts. "There aren't districts like that in Act 43."

He also argued that partisan scores for each district are "far from crystal balls." "One district has a score of 51.22 percent. Frankly these are educated guesses that don’t predict the future," said Keenan.

Plaintiffs point to data from the 2012 and 2014 elections to demonstrate the problem. In 2012, Republican candidates won 60 of 99 seats, despite the fact that Democratic candidates won a majority of the statewide vote. Plaintiffs characterize these votes as "wasted."

"Because of the partisan gerrymander enacted in 2011, Democrats cannot obtain a majority in the state Assembly even if they receive a considerable majority of the statewide vote for Assembly candidates, and this will be true so long as this gerrymander remains in effect. This is not democracy," explains one of the voter plaintiffs, Professor of Law Emeritus at the University of Wisconsin-Madison Bill Whitford.

The case shows how Governor Walker and the Wisconsin GOP attempted "to transform Wisconsin into a one-party state," said Jay Heck of Wisconsin Common Cause, who was observing the trial.

Another set of data is based upon a metric called the "efficiency gap." The efficiency gap is calculated by dividing the number of "wasted votes" by total votes. Stephanopolous previously told public radio that "the average gap in all states over the last 40 years has been zero," meaning redistricting plans didn’t give either political party an advantage. But he says Wisconsin’s gap after its redistricting plan went into effect was 13 percent.

While the U.S. Supreme Court has shown a willingness to find this type of hyper-partisan gerrymandering unconstitutional, until now there hasn’t been a workable standard to distinguish between legal and unconstitutional line drawing. Plaintiffs hope that the "efficiency gap" calculation might serve as an easy-to-measure, objective new standard.

Sachin Chheda, director of the Fair Elections Project, summed up the objective of the lawsuit well when he said, "Under the current maps politicians choose their voters. We want a map where voters choose their politicians instead."

David Armiak contributed to this report. The trial began today and is expected to last four days. For complete trial briefs, see www.fairelectionsproject.org.

I live in Bloomington Indiana and our small University town is divided into two districts. No Dem vote in Indiana is allowed to count since Obama won in 2008. Dems could take Indiana but for Gerrymandering.
The GOP to be charitable : is patently corrupt. This is radicalism in the purist sense. A flailing political party should look upon it's deficits with voters and attempt to reconcile by moving in policy direction, which has more synchronicity with the voter's real concerns. Not a single person I know whom leans Republican would advocate this alarming and sinister scheme to deny Wisconsin citizens a representative government! ANYONE associated to this diabolical zealotry must be prosecuted and imprisoned! Unless we inflict sobering consequences to criminal subversion of our democracy - this wretched activity will not cease.