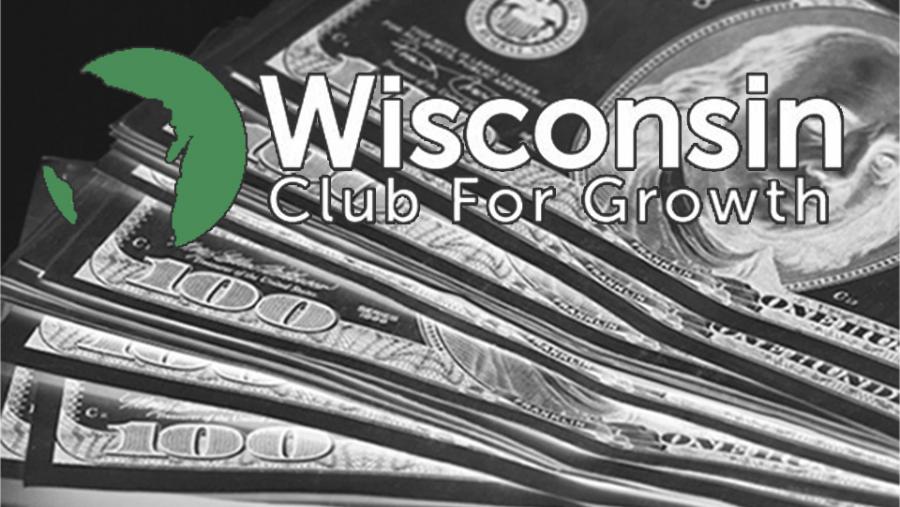 Once again, the biggest spender in Wisconsin's Supreme Court race isn't one of the candidates. It's a little-know dark money group, which is keeping its funders secret from Wisconsinites. Plus, thanks to a recent law change, the supposedly "independent" group is now allowed to coordinate directly with its favored candidate without disclosing that coordination to the public.

The secret money group, Wisconsin Alliance for Reform (WAR), was registered by Lorri Pickens, a Koch network operative with ties to the largest-ever campaign finance violation in Wisconsin history. 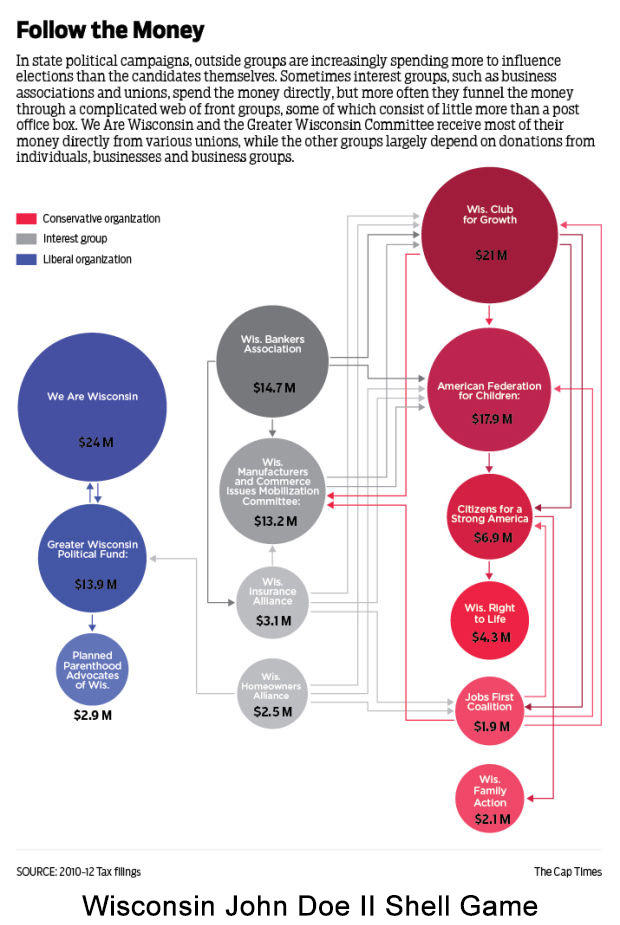 As of March 29, WAR has spent an estimated $1.4 million on television and radio ads attacking Judge JoAnne Kloppenburg, who challenges Justice Rebecca Bradley in the April 5 election. Bradley was recently appointed to the court by Governor Scott Walker after the death of Justice N. Patrick Crooks in September 2015.

WAR's total spending so far appears to be greater than the spending of the candidates combined, according to a Brennan Center analysis.

Coincidentally, two other groups that have spent millions in previous Supreme Court races, WCFG and Wisconsin Manufacturers and Commerce (WMC), have yet to report any spending on the current race. The Wisconsin Democracy Campaign is not the only group that suspects these groups are bankrolling WAR as a means of keeping their controversial names and practices out of the headlines.

The misleading WAR ads try to paint Kloppenburg as soft on crime. One ad claiming that Kloppenburg let a sex offender off "on a technicality" was ruled "Mostly False" by Politifact. WAR claimed on March 16 that it would stop running another misleading ad on child sexual abuse after one of the families involved in the case complained that it was "political slander," but as of March 30 the ad was still running on TV and available online.

At the last minute, the liberal secret money group, Greater Wisconsin Committee, dropped its own ad spending at least $400,000 attacking Bradley for 2006 column arguing that pharmacists should be allowed to deny people birth control and for for anti-gay columns she penned as a college student.

A well-connected right-wing operative with a long history in Wisconsin, Pickens has previously worked with the Sam Adams Alliance and the Lucy Burns Institute institutions tied to WCFG Director Eric O'Keefe and his wife, Leslie Graves. She also worked as a lobbyist for the anti-LGBT and anti-abortion Wisconsin Family Action. She was also a field coordinator for the campaign to ban same-sex marriage in Wisconsin in 2006.

CMD first reported on WAR in October 2015, when the newly-formed group began running radio ads to support a bill to cripple the state elections board. AFP also lobbied in favor of that bill.

At the time there was trio of bills undermining Wisconsin anti-corruption laws and clean government tradition. The bills: 1) destroyed the non-partisan board governing campaigns and elections in Wisconsin, putting in place partisan appointees; 2) allowed for unlimited undisclosed money in Wisconsin campaigns by permitting for the first time direct coordination between candidates and so-called issue ad groups; and, 3) exempted politicians from ever being investigated by prosecutors for violations of campaign finance law under the state's unique "John Doe" process, which Wisconsin had traditionally used in lieu of a grand jury.

AFP, Wisconsin Family Action, and Wisconsin Right to Life were the only institutions registered as lobbying in support of the bills undermining Wisconsin's anti-corruption laws, although not every group lobbied for each bill.

Using secret money groups to influence campaigns and elections is nothing new for Pickens.

In 1997, Pickens was an officer for an "independent" group that received the largest penalty ever levied for election violations in the state of Wisconsin. The case involved a new spending group called the Wisconsin Coalition for Voter Participation (WCVP). Investigators found that WCVP illegally coordinated with the campaign of state Supreme Court Justice Jon Wilcox on campaign mailers. While Pickens herself was not prosecuted, her husband Brent, who set up WCVP, was fined $15,000 and banned from politics for five years. Marc Block, who simultaneously served as Wilcox's campaign chair and headed WCVP, was fined $10,000 and banned from politics for three years. In total, some $60,000 in fines were levied. Block later took his talents to the Koch's AFP group and the campaign of Herman Cain where he ran into more trouble.

Groups Implicated in the John Doe Investigation of Dark Money

Pickens did not seem to learn much from the 1997 experience.

During the 2011-2012 historic Wisconsin recalls, Wisconsin Family Action and Wisconsin Right to Life acted as shells in the shell game for Wisconsin Club for Growth money, which was raised by Scott Walker from millionaires and billionaires across the nation, such as Sheldon Adelson and Donald Trump, to fight both Wisconsin Senate recall races and his own June 2012 recall election.

The flow of funds through the groups was the issue at the heart of the second John Doe investigation into potentially illegal campaign coordination that also included AFP. Prosecutors believed the $20 million, big-money shell game was centrally funded and controlled by Walker's chief strategist and WCFG political director, R. J. Johnson.

The 1997 Wilcox case and the 2002 prosecution of State Senator Chuck Chvala, who set up phony shell groups for funneling money, served as precedents for the prosecutor's case, but John Doe was shut down by the right-wing majority of the Wisconsin Supreme Court in July 2015, which had also been elected to office with multi-million dollar expenditures by WMC and WCFG.

According to the Sunlight Foundation, WAR's ad time was purchased by TV ad firm Nonbox, the go-to media firm of R. J. Johnson during the 2011-2012 recall campaigns.

"It wouldn't surprise me in the least if R.J. Johnson wasn't the impetus behind these ads against Kloppenburg," said Jay Heck of Wisconsin Common Cause. "R.J. imported a Lee Atwater style of 'no-holds-barred' politics to Wisconsin from Florida decades ago. Up until that point, we had not seen this type of politics in Wisconsin." Lee Atwater was George H.W. Bush's campaign manager, the architect of the infamous, racially charged "Willy Horton" ads.

Evidence uncovered during the John Doe investigation included an email from Nonbox asking both Johnson and Walker campaign manager Keith Gilkes to review a WCFG ad.

This time around, Nonbox is also working with the Republican State Leadership Committee's Judicial Fairness Initiative on anti-Kloppenburg radio ads and mailers that strongly echo the style and messaging of WAR's campaign. A national committee that became powerful under the leadership of Ed Gillespie and dedicated to electing Republicans to high-level state offices, the RSLC was the top outside spender in state-level judicial elections in 2014.

This is the first judicial race in Wisconsin that RSLC has been involved in, but the RSLC was also listed as one of the groups under investigation in the John Doe probe.

The RSLC's Judicial Fairness Initiative reported (see pdf) spending $111,911 on brochures and radio ads against Kloppenburg, including $61,375 to Nonbox, as of March 28.

Leading the Attack on Private Sector Workers in Wisconsin 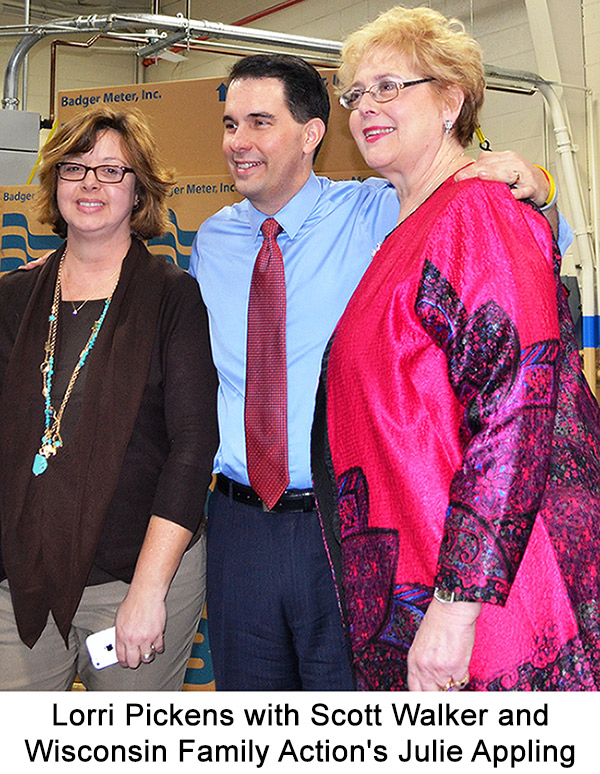 Pickens also rolled out the astroturf in late 2015 to spur passage of an anti-union "right to work" bill in Wisconsin, helping implement the Koch playbook to limit worker's rights.

Just a day before American Legislative Exchange Council (ALEC) member and state Rep. Chris Kapenga introduced an almost verbatim ALEC bill attacking private-sector unions in December 2015, Pickens announced a brand new shell in the shell game, a 501(c)(3) "charitable" organization, called Wisconsin Right to Work, which appeared to consist of a P.O. Box and a website, FreedomToWorkWI.com. While the group claimed to be "a grassroots citizen engagement organization," its website was registered by Kurt Luidhart, an Indiana resident whose media firm had also run online fundraising for Walker's campaign and had worked with AFP.

Right to work was pushed through the GOP-controlled legislature with help from a traveling team of Koch allies, including an ALEC "scholar," and a Heritage Foundation "expert." AFP popped up its usual TV commercials in support of the Koch agenda, but it all seemed rather unnecessary and the bill passed quickly.

While Walker refused questions from reporters at the signing ceremony, he had plenty of time to take a celebratory photo with Pickens.

The total amount of money that will be spent by groups in this election is not yet know and thanks to the big money interests and their all-too-willing servants, voters may never know who is bankrolling their court and undermining impartial justice.

I am fed up with the Koch oligarchy running our state. Walker has destroyed Wisconsin. We have lost most of our rights, rights to even take politicians to court for corruption, fraud, etc.