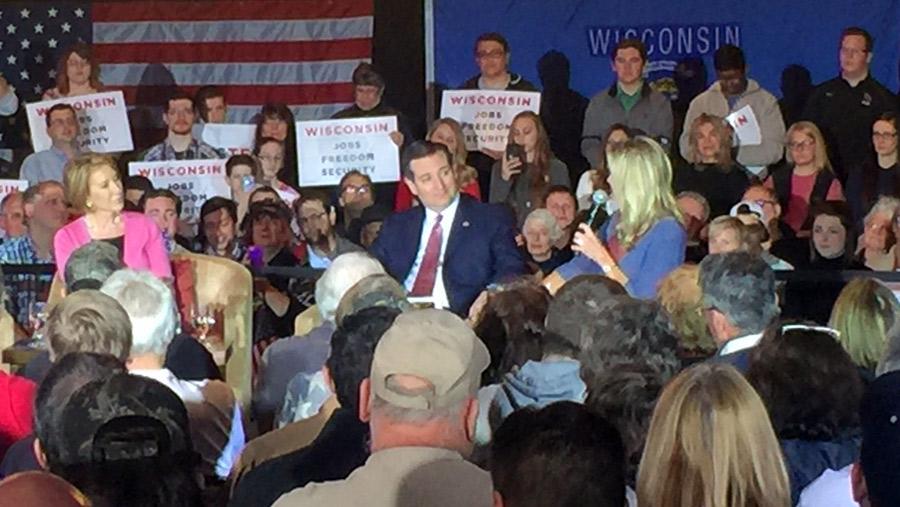 In the last Wisconsin poll before the election, reliable Marquette University pollster Charles Franklin found that Ted Cruz had surged ahead of Donald Trump 40-30 in the contest for the GOP primary. John Kasich, trailed at 21 percent.

In February, Trump was ahead by double digits, but a lot has changed since then. There are fewer candidates in the race, and the Wisconsin GOP has resisted Trump in a significant way.

This week Governor Scott Walker finally endorsed Cruz and the heavy-hitter dark money group, Club for Growth, is spending a million dollars on advertising in the final week before the April 5th primary in support of Cruz. "Do the math. Only Ted Cruz can beat Donald Trump," intones the narrator in the television ad.

At an event billed as a "Jobs, Freedom and Security Rally" the Cruz campaign staged a round table discussion in a small room that featured "strong women" supporters. The women included the candidates wife, Heidi Cruz, former Hewlett Packard CEO Carly Fiorina, former Heritage Foundation VP and author Rebecca Hagelin as well as Cruz's secret weapon--mom Eleanor Darragh, who made a rare public appearances on behalf of her son.

Hagelin set the stage at this "celebration of women." She assured the audience that: "As you strive to live your life everyday to its fullest, you look for a leader for someone who understands...It is important for me to know there is a person who understands that issues like jobs, freedom, and security are important to me as a woman."

Hagelin prompted Darragh to talk about the years when her son memorized the Constitution. Darragh who is not used to speaking in public responded, "Well, I am not used to this. But, when he was studying the Constitution, he would spend hours reciting it in the house. He was with a group called Constitutional Corroborators, this was a great outlet for him, and it kept him out of trouble," she continued, "He was going to Rotary Club meetings and Kiwanis Club meetings and the men would clap and he was so happy."

When it was candidate's turn to talk, Cruz admitted, "I talk about my dad a lot more because he has always been my hero. I would tell my father's story about being a prisoner in Cuba and my mom would look at me and ask, did you have a mother? Or were you raised by wolves?"

"I had a different kind of relationship with my mom," said Cruz, "we would talk and talk and talk. We were not morning people, and she would drive me 30-40 minutes to school in the morning...eating a bowl of cereal on the way." Cruz went on, "Twice a week she would drive across town when I met with Constitutional Corroborators...She would wait outside the library and drive me home."

"If we had disagreements, we worked things out. I remember when I was in when I was in high school, and I would come home late at night, she would always be up waiting for me…So, we worked out a compromise, that she would go to sleep in my bed so I could wake her up when I got in and send her off to her own bed."

How Darragh had time to wait around for her son was not explained. A graduate of Rice University, Darragh appears to have had quite a career.

"I got my degree in math from Rice, before there were computers. I got a summer job at Shell in the geophysical department. My boss recommended me to the head of the computer department at Shell Research Lab, and he taught me all about computer programming on the job. I fell into it, it was great," she said.

The event, focusing on the candidate's female "role models," was designed to counter recent bad press by the National Enquirer about alleged affairs and to take advantage of the perception that fellow-candidate Trump has a major problem with women. Trump's unflattering tweet of Cruz's wife Heidi and Cruz's "sniveling coward" response has dominated cable news for days.

But these issues mattered little to the women in the audience. Cruz clearly has women supporters in the state.

Madison resident Sharon Daniel has been following Cruz's career since he was Solicitor General of Texas, bringing numerous high-profile cases. "I have checked into his background and the cases he argued before the U.S. Supreme Court, and he is the only person who should be elected president if you value the Constitution and love liberty," she said.

She cited three cases that Cruz was involved in: the Heller case, which challenged Washington D.C.'s handgun ban; a case defending the Ten Commandments monument at the Texas State Capitol; and a case over whether or not Mexican nationals can be executed by the state of Texas under international law.