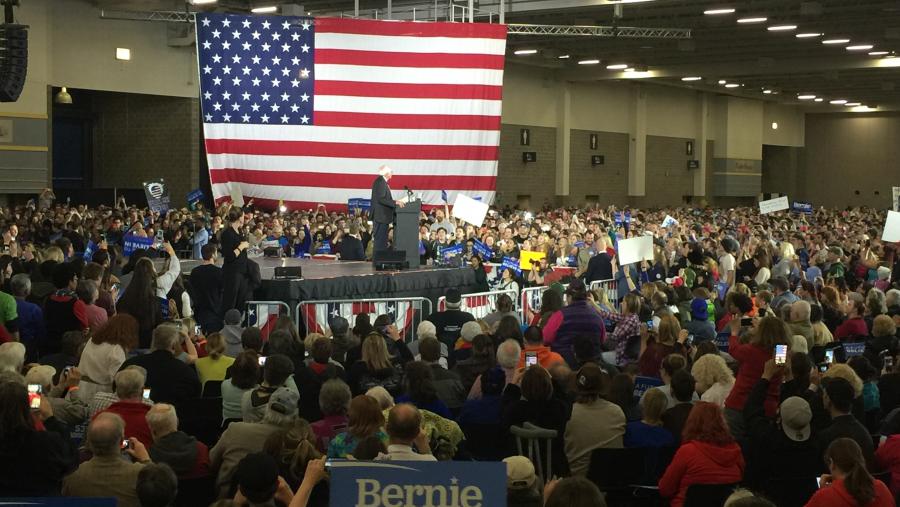 MADISON -- The Sanders campaign came to Madison, Wisconsin on Saturday with a wind at its back. Sanders swept Alaska, Washington State and Hawaii with huge margins, even though the political establishment in those states overwhelmingly supported his primary opponent Hillary Clinton. Call it an Easter Rebellion of sorts.

"We knew things were going to improve as we headed West," Sanders told a crowd topping 8,000 at the Madison Expo Center. "We are making significant inroads in Secretary Clinton's lead and we have, with your support here in Wisconsin, a path toward victory."

Wisconsin's primary is April 5th and Sanders is popular in the Badger State where he has spoken at the annual progressive festival "Fighting Bob Fest" for years.

Sanders surge was aided by an astonishing video of his delighted reaction when a tiny sparrow landed on his podium during a speech. The video went viral and launched the meme "Birdie Sanders."

At his stop in Madison, Sanders spent little time talking about Clinton, but did take aim at the state's unpopular governor.

"At a time when this country has one of the lowest voter turn outs than any other country on earth, the idea that Governor Walker, or any other governor, would make it harder to participate in the political process is beyond comprehension," said Sanders referencing Wisconsin's voter ID bill that will be in effect for the first time in the April primary.

"I say to Governor Walker and all of the other cowardly Republican governors, if you cannot participate in a free and fair election where everybody votes, get out of politics--get another job!" said Sanders. The Wisconsin bill threatens to disenfranchise 300,000, according to the federal court which temporarily stopped its implementation.

Sanders also took aim at the Koch brothers network, which pledged to spend $900 million in the 2016 election cycle.

The Kochs have spent millions supporting Walker over the years. Koch PAC maxed out to Walker in 2010. In 2012, the Koch's Americans for Prosperity claimed it spent $10 million to keep him there during the 2012 recall election.

Campaign finance reform has long been critical issue for Sanders who speaks of the need to overturn the Supreme Court's Citizens United decision at every stop. In 2013, he introduced a resolution to amend the U.S. Constitution, clarifying that the right to vote and the ability to make campaign contributions and expenditures belong only to real people, not corporations. As a candidate, Sanders has also lead by example raising more than $138 million, mostly in small contributions averaging $27.

Sanders message of a "rigged economy" that benefits the wealthy, but fails to work for working families resonated with the Madison crowd. Sanders also had a message for the union workers. Unions have taken a pounding under Scott Walker who signed bills dismantling public sector unions in 2011 and private sector unions in 2015.

"Let me tell Governor Walker he may have won a short lived victory here against the unions, but that victory will not stand in the long run, we are going to rebuild the trade unions!" Sanders assured the crowd.

Wisconsin is another state where most of the political establishment is supporting Clinton or staying neutral, and recent polling has given Clinton the edge here. But the Sanders camp feels he has a deep well of support in the state that he has visited often and they will be campaigning hard for Wisconsin's 98 delegates. Madison Mayor Paul Soglin is one elected official backing Sanders and introduced him at the rally as the only presidential candidate who wasn't beholden to special interests with a history of fighting for the middle-class.

After Wisconsin, Clinton and Sanders will face off in New York state, another location where the candidates both have strong ties.