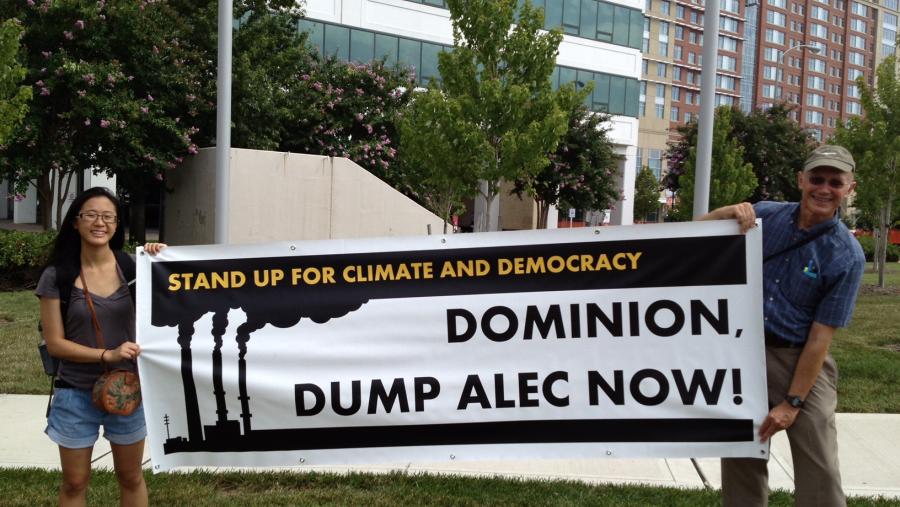 RICHMOND, VA -- Today, the Sierra Club Virginia Chapter and the Center for Media and Democracy released ALEC EXPOSED: Corporate Polluters Undermining Clean Power in Virginia, a report that reveals the influence that ALEC and its political allies have exerted to stymie state climate and clean energy policies.

"I was pleased that during the 2016 General Assembly session we were able—at least so far—to fend off ALEC's attempt to derail Virginia's plan to curb emissions and comply with the Clean Power Plan," said Virginia Delegate Rip Sullivan (D-48). "It is disappointing and troubling, though, that ALEC-inspired HB2 and SB21 passed the General Assembly—thankfully not by veto-proof majorities. Virginia should be leading the way on clean energy, but sadly, we lag far behind. I will continue to work hard to push for meaningful progress, moving Virginia toward a new clean energy economy."

For decades, billionaires Charles and David Koch have invested in ALEC and their state-based work promoting the interests and lobbying agenda of fossil fuel companies. Top beneficiaries of the policy pushed by ALEC include Koch Industries, their oil and gas conglomerate that is the second largest privately-held company in America and that has an especially poor environmental record. Numerous corporate funders, including Google and American Electric Power, have recently cut ties with ALEC as its opposition to renewable energy and action on climate change have become more widely known. But Dominion Resources remains in ALEC, and Virginia lawmakers linked to ALEC continue attempts to block implementation of the Clean Power Plan.

"ALEC helps large polluters in Virginia work behind the scenes to craft legislation blocking action on climate change and pollution," said Seth Heald, chair of the Sierra Club Virginia Chapter. "Some ALEC members in the Commonwealth do this while simultaneously claiming to be good corporate citizens and caring about sustainability, but the fact is you simply cannot be serious about reducing carbon pollution and addressing climate change while also supporting ALEC."

"We all pay the price for pollution. These costs--to our health, our wallets, our communities, and our future well being--will continue to mount unless we act," said Lisa Graves, Executive Director of the Center for Media and Democracy.

"The Clean Power Plan takes important steps to help curb dangerous carbon pollution from new and existing power plants for the first time ever, and we need a strong implementation plan in Virginia and other states to protect our health and our planet. The public should not let polluter profits and ALEC's pay-to-play agenda stand in the way of these crucial protections."

This session, Virginia lawmakers have introduced three bills and amended the state budget in an effort to impede development of Virginia's plan to curb emissions. A side-by-side analysis by CMD and the Sierra Club shows that these bills are almost verbatim to "model" bills that have already been secretly voted on by corporate lobbyists and special interest groups voting as equals with legislators at closed-door ALEC task force meetings.

The Virginia versions of these bills are expected to be vetoed; but odds are high that they will be introduced again next session, and if they do not succeed, the session after that.

Meanwhile the seas continue to rise along Virginia's coast, and other climate impacts are being felt across the Commonwealth. In particular, the state's low-income communities/communities of color continue to bear the disproportionate negative burdens of carbon pollution.

"Where I live we see the impacts of climate change on an almost daily basis. The smallest rainstorm can cause severe flooding and makes some areas impassable, and it is only getting worse," said Nisha Witt, a Navy veteran from Hampton Roads.

"We are also threatened by the increased strength and frequency of extreme weather events like hurricanes, and are very vulnerable to storm surge. Sea levels are rising faster than average in Hampton Roads, and if we don't take action to reduce carbon pollution now we are really gambling with the future of our region."

Dirty fuel energy sources are among the largest creators of carbon pollution, the main contributor to climate disruption, fueling superstorms, ﬂoods, wildﬁres, and record drought. Additionally, the power plants spewing this dangerous carbon pollution have a disproportionately negative effect on low-income communities and communities of color already suffering from the worst effects of toxic air pollution, including heart attacks, asthma, and premature death.