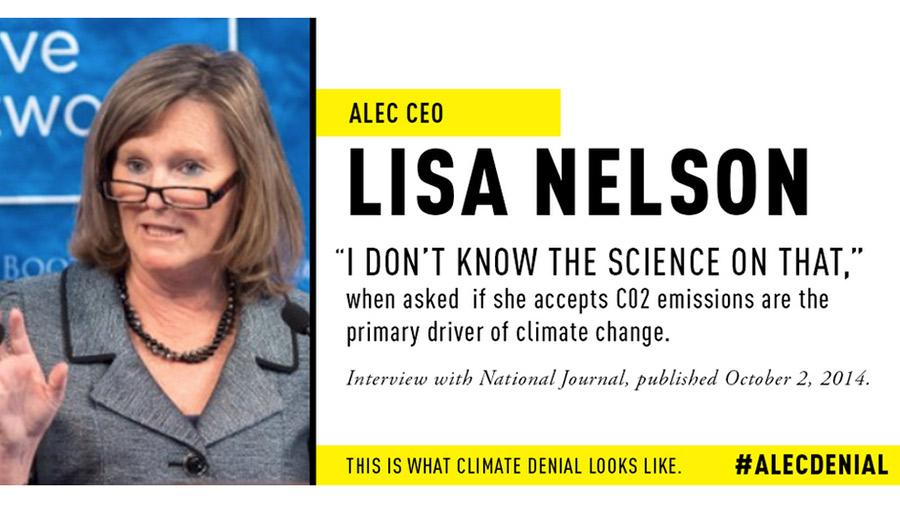 This piece was first published by Connor Gibson at Greenpeace and is being cross-posted by the Center for Media and Democracy.

The third and final meeting of the year for the American Legislative Exchange Council (ALEC) just wrapped up in Scottsdale, Arizona, last week.

On the day of ALEC's board meeting, Greenpeace attempted to ask ALEC's board of directors and executives about climate change science. ALEC CEO Lisa Nelson was not keen on speaking to us.

ALEC has a long history of denying climate change. It continues to take payments from fossil fuel companies like Koch Industries, ExxonMobil, and Peabody Energy. It was part of the American Petroleum Institute's leaked plan to manipulate the public's trust in climate scientists, spelled out in an erie memo from 1998.

The group even hosts privately-funded events where ALEC legislators are taught how to deny climate change science by public relations consultants who have ties to fossil fuel companies.

As for Lisa Nelson, she is on the board of a Libertarian think tank that promotes solutions to climate change. The Niskanen Center was named after the late co-founder of Charles Koch's Cato Institute, whose recent death led to an attempted coup of the organization by the Koch brothers. Some of Niskanen's staff are former Cato executives, who now support a carbon tax, perhaps the most viable policy solution to global warming. This has caused a rift between the Libertarian purists and the Koch network's hacks-for-hire, like Pat Michaels, the disgraced climatologist at Cato.

Since Ms. Nelson has taken the helm of ALEC, she has lost over a dozen corporate members. Some of those companies--Google, SAP, and Shell--even condemned ALEC specifically for peddling doubt over climate change in their statements explaining why they have abandoned the lobbying group.

Ms. Nelson has inherited a big problem. After decades of helping companies lie to legislators about climate change, the companies themselves and many of their front groups will no longer deny that humans are responsible for unnatural climate variability. But ALEC legislators have not received the memo, and if you ask them about climate change, they sound woefully uninformed. Almost as if they were paid to.

More to come on that.