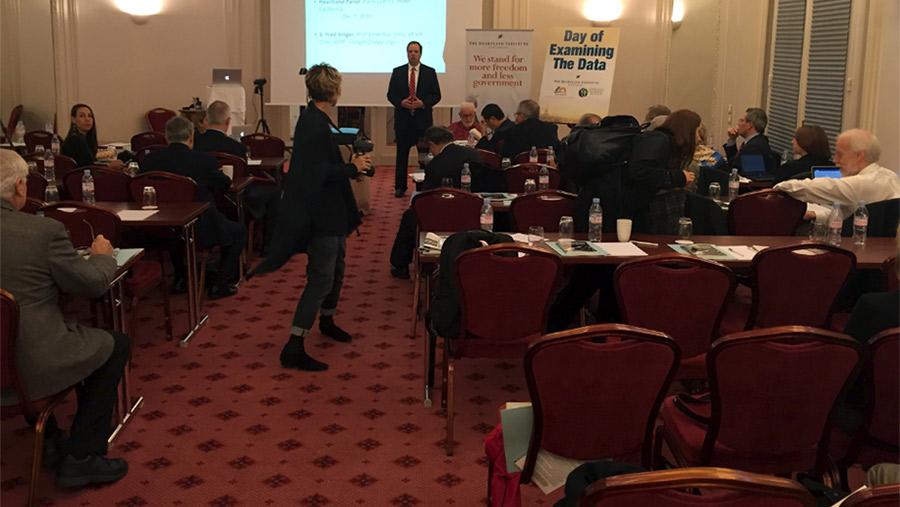 Paris, FRANCE--A climate change denial event in Paris, organized jointly by two US groups, the coal-funded Heartland Institute and The Committee For A Constructive Tomorrow (CFACT), held to coincide with the UN climate COP21 talks, quietly flopped Monday when hardly anyone turned up to listen to what actual experts consider to be Heartland's counter-factual nonsense.

Billed as the "Day of Examining the Data," the event was held at the Hotel California, across town from where the actual UN negotiations are taking place, Paris. Only about 30 people were in attendance, which is all the more embarrassing since the agenda featured roughly half this number as speakers. The turnout was only slightly better on the live stream, with only about another 100 people watching online.

Despite the abundance of available seating space, two reporters from DeSmog UK were ordered to leave the event which had been described as being "open to the public."

Trying to put a brave face on the embarrassingly low numbers, James Taylor of the Heartland Institute claimed that some meetings taking place inside the COP featured just ten people. "So congratulations, you have already surpassed the impact of the United Nations Conference of the Parties," Taylor told the room. Heartland later described the event as "successful."

The Heartland Institute is probably best known for its controversial 2012 billboard campaign comparing scientists who accept the science around climate change with the Unabomber Ted Kaczynski and the al-Qaida leader Osama bin Laden.

Heartland has a long history of receiving cash from fossil fuel companies, including from ExxonMobil and groups backed by the billionaire Koch brothers, both of which have also funded CFACT.

Most recently, when Alpha Natural Resources filed for bankruptcy in the summer of 2015, it was revealed by Lee Fang of the Intercept via court filings that the US coal giant has also quietly funded Heartland.

The US based lawyer and climate denier, Chris Horner was also in the room at the Paris event. Horner is best known for filing large numbers of speculative Freedom of Information (FOIA) requests with climate scientists based at US universities, to the frequency that it has been described as "harassment." The Alpha bankruptcy documents revealed Horner also receives financial support from Alpha.

CFACT will follow up the day of denial with another event nearby, an evening "red carpet premiere" of its new climate change denial film, Climate Hustle. CMD requested a ticket for the screening, advertised as being open to the public. After initially being accepted, this was later withdrawn and CMD was told its reporter would not be allowed to attend.