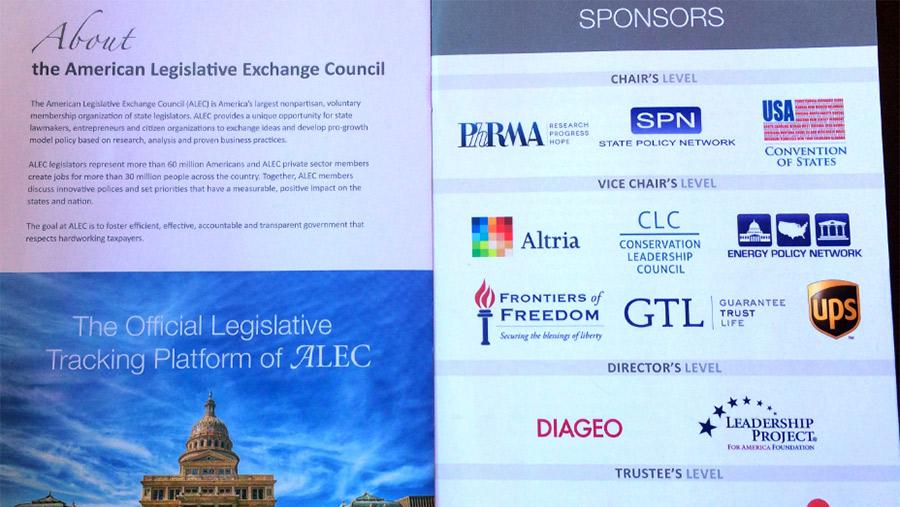 Koch-funded groups and utilities are bankrolling ALEC's closed-door winter meeting and parties for state legislators that are underway in Scottsdale, Arizona, at a luxury resort and spa. The three-day gathering is bringing together lobbyists and legislators to plan their 2016 bill agenda for the upcoming legislative session.

Koch-funded underwriters of the corporate bill mill's meeting includes the State Policy Network ("Chair's level" for $50,000); Frontiers of Freedom ("Vice Chair's level" for $25,000), and the Texas Public Policy Foundation ("Trustee's level" for $5,000), which recently hosted a conference of its own where numerous climate deniers criticized government action to address climate change. (The amount required for these sponsorship levels is based on figures from ALEC's last meeting, earlier this summer.)

The Energy Policy Network also funded the meeting at the "Vice Chair's level," which was launched by former Peabody Energy executive and ALEC board member Kelly Mader.

An Arizona company called First Solar is a "Trustee's level" ($5,000) funder of the ALEC confab for lobbyists and right-wing legislators. The solar company is owned by an investment arm of the Walton family. First Solar is focusing on large- or utility-scale solar farms and it has attacked its competition by attacking incentives for home- or rooftop-solar—and so has ALEC, which has peddled rhetoric that home solar users who get credit for putting energy back in the grid are free-riders or free-loaders.

Two regional utilities, Arizona Public Service and Southwest Gas, also gave ALEC money for the gathering at the "Trustee's level." At previous ALEC events for lawmakers, utility interests have had a powerful voice in ALEC. Todd Wynn of the Edison Electric Institute, a trade organization that represents utilities, previously staffed ALEC's Energy, Environment and Agriculture Task Force, where corporate lobbyists vote as equals with legislators on bills that advance their corporate interests, behind closed doors. Wynn advised ALEC legislators to begin taking steps to comply with the Clean Power Plan, which would help "put something in the books so they can continue with the litigation strategy," according to the Washington Post.

This year's ALEC confab includes a session to train lawmakers about the Clean Power Plan, the commitment that the U.S. is making in Paris at the United Nations convention on climate change happening at the same time as ALEC's conference. From "model resolutions" opposing the climate action plan to "model policies" that make it harder for states to implement the rule, ALEC has attacked the Clean Power Plan from numerous angles.

Additionally, a number of private sector members of ALEC, including their private sector chair American Electric Power, are challenging the Clean Power Plan rule in court.

Below is a list of the known funders of this ALEC resort meeting, although other corporations fund ALEC's operations generally or fund the travel of lawmakers:

* The "Conservation Leadership Council" (CLC) is an organization that receives financial and other support from the Environmental Defense Fund (EDF). The Center for Media and Democracy reached out to EDF about CLC being described as an ALEC financial sponsor.

"The CLC was invited to and at one point had intended to participate in an ALEC workshop at their upcoming conference to broaden the conversation supporting clean energy. In the end, they decided not to sponsor the workshop," EDF's Associate Vice President Jeremy Symons told CMD, adding "that was the right decision."

"To be clear, EDF does not provide financial support to ALEC, neither directly nor indirectly. EDF opposes ALEC's environmental agenda. We have not changed our position regarding ALEC as expressed in our statement released in 2014." In that 2014 statement, EDF described ALEC as "anti-environmental, dishonest about whether climate change exists, and waging an all-out attack on clean energy."

Even though CLC has indicated that it did not go forward with paying to play with ALEC through sponsoring a workshop, ALEC's brochure lists CLC as one of the few entities that funded its meeting for lobbyists and legislators to advance the ALEC legislative agenda.